On 14th January, the Legislative Assembly passed the controversial Goa Preservation of Trees (amendment) Bill 2016, reclassifying the coconut plant as a palm. The opposition in the House—the Congress and independent members—walked out in protest.

A couple of days earlier, heritage activist Professor Prajal Sakhardande led protestors including students, NGO members and opposition politicians on a tree hugging protest on the Mapusa-Guirim stretch of the highway, bringing traffic to a halt. The politicians included MLAs Vijai Sardesai, Reginaldo Lourenco and Rohan Khaunte. The social media platforms too have been ablaze with posts supporting the status of the coconut as a tree.

The Environment and Forest Minister Rajendra Arlekar insists that the common people support this move. “The move is aimed to ease the common man of Goa, who has to face hardships to remove a coconut tree endangering his house or human life,” says Arlekar. With this bill coming into effect, coconut trees in private property can be cut without permission. Activists argue that this sudden move by the government is intended to favour an agro-group that wants to clear out its land of coconut trees. Real estate groups and industrialists will now be able to clear large swathes of coconut plantations without having to ask permission.

But what does botany say about the coconut tree? Is it a tree? Or is it a grass? Botanist Miguel Braganza holds the original Goa, Daman and Diu Preservation of Trees Act of 1984 defines the tree as “any woody plant whose branches spring from and are supported upon a trunk or body and whose trunk or body is not less than five centimetre in diameter at a height of thirty centimetres from the ground level and is not less than one metre in height from the ground level.” Hence, he argues, there is nothing wrong in deleting coconut from the definition since a tree needs to have branches.

So the 1984 Act said the coconut is not a tree. The 2008 change saw the Congress government turn the coconut a tree. And now the BJP government is simply reversing the status of the coconut back to a ‘non-tree’.  Miguel still considers the government’s move as suspicious, possibly to facilitate some landed corporate group. 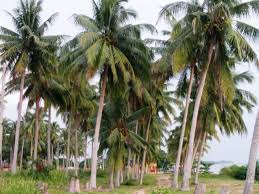 Popular sentiment in the wake of this bill holds that the common man has never complained about difficulties in cutting coconut trees. Goan householders treasure a yielding tree for its coconuts which are an important part of curries and other Goan dishes. If a tree or two leans dangerously over a house, or a few palms have grown old and weak, the owner simply cuts them down without even asking the authorities. The process of replacing the cut trees is always ongoing, with new saplings being regularly planted. The 2008 Act has only been a thorn in the flesh of the corporates who want to carry out large scale cutting, and what the ‘common’ people see as degradation of the Goan environment and ethos.

Cyberspace pundits are also pondering the semantics of the coconut tree/non-tree. “Technically, they are correct in that it’s not a tree. Trees are primarily dicots, whereas the Coconut is a monocot,” argues one poster on a Reddit forum.

Dicots are plants that have two cotolydons (sections) in their seed. Cotolydons are the first ‘leaves’ that emerge. Common dicots are most trees and shrubs, as well as beans, peas, tomatoes, etc. Common monocots like grasses and palms have only a single ‘leaf’ in their seeds. A palm does not have trunks any more than corn or grass does. It is most commonly called a shaft or stalk, informs the forum member. Another poster disagrees, saying there are a large number of trees like the conifers that are clearly trees, but not dicots.

But then again, the charter of Goa’s Forest department refers to coconuts as being tree cover, which brings it under their area of concern, and the recent government move obviously conflicts with this concern.

We could argue till the cows come home or the coconuts fall on our heads, but at the end of the brouhaha, one thing is clear. Many landed industrialists and builders are going to breathe a huge sigh of relief that they can fire up their bulldozers and mow down the coconut groves in their path. And the rest of Goa will only look on helplessly, knowing their own elected representatives sanctioned the destruction of Goa’s Kalpataru, the noble all-giving coconut tree.