For many years, search Tiracol was just a nondescript, price agrarian village at the northernmost tip of Goa, nurse known only for its run-down fort.

Being the only Goa-held territory North of the River Tiracol—and one folks had to cross a ferry to get to, tides permitting – not a lot of people made the trek to Tiracol, not from the Goan side of things anyway.

All that is now history. If one goes by the sheer amount of money that is being pumped into the village, it can certainly claim bragging rights.

An INR 77 crore ‘iconic bridge’ viaduct and cable-stayed bridge modeled on the Sydney Harbour Bridge may soon connect Tiracol to the village of Querim on the Southern Bank of the Tiracol river.

A multi-crore investment is being executed by M/s Leading Hotels Ltd for a golf course and an accompanying starred hotel by the American Four Seasons hotel.

The rest is courtroom drama and pending decisions by respective courts where the cases are being heard. There are three cases which are currently holding the project back – one against the bridge and two against the golf course project.

The case against the bridge, filed by the Goa Foundation before the National Green Tribunal at Pune, challenges the permissions given by the Goa Coastal Zone Management Authority (GCZMA) to construct the bridge. Permissions need to be sought from the Union Ministry of Environment and Forest and not just the state government authority, the petition argues, and further, that the question of permission is moot, since the bridge is being built right on the beach and too close to the sea, which falls under the “No Development Zone” under the laws of the land.

The petitions against the golf course project argue that part of the land on which the golf course is being constructed is forest land and that trees are being felled without the necessary clearances; and more importantly, that the land which the Leading Hotels has bought is tenanted agricultural land and could not have been legally sold.

Under the Goa Land Tenancy Act, tenants cultivating land would become the deemed owners of the land, but they cannot further sell the land or convert it for non-agricultural purposes. 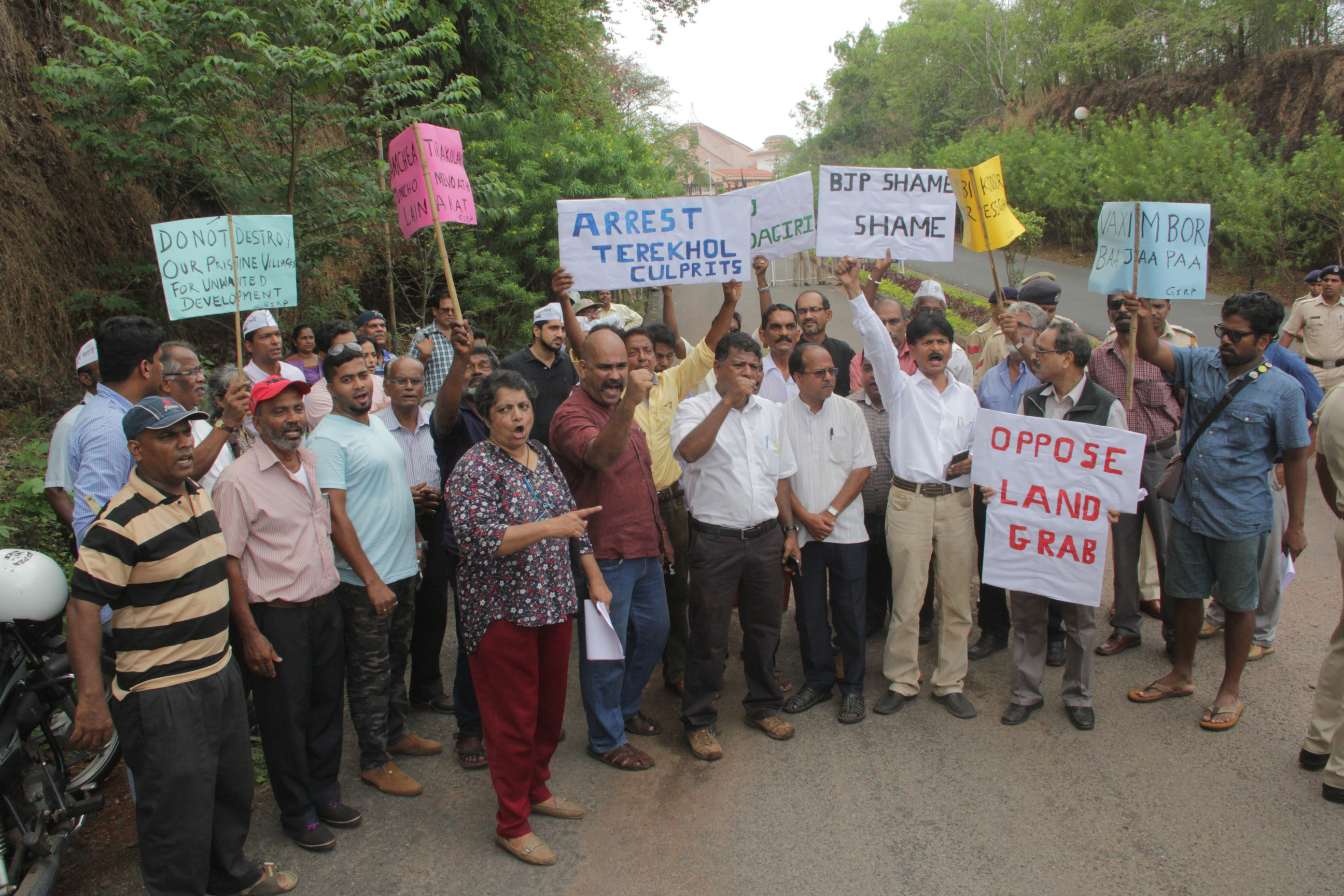 NGO protests against the ongoing projects at Tiracol

If the sale is ruled illegal, it puts the entire project in jeopardy.

Legal issues aside, the project faces opposition from civil society on various grounds ranging from “high-handedness”, contempt for law displayed by the promoters, and a whole range of concerns such as Goa obtaining a water guzzling golf course, when its own residents face shortages of water.

Things came to a head when the promoters began moving machinery on to the site.

“The issue is being raised now because, now we have got all the permissions and are ready to begin work. All this while we maintained a low profile as we went about securing permissions and other authorizations,” said Gerson Rebelo, communication officer for Leading Hotels.

He denied that they were doing anything illegal as alleged by the villagers and activists.

On the other hand, the villagers have alleged that the hotel has thrown all laws to the wind in its pursuit to go ahead and build a project despite a stay from the National Green Tribunal on felling of trees on the site as well as several cases pending before the various fora.

“We believe that the state machinery is completely on the side of the promoters of the golf course. When we file complaints against work being done illegally, they do not act against it,” said Francis Rodrigues, a villager.

Does Goa need a golf course? The opinion is divided with some saying that it will help bring in high-end tourists to the State. Is Goa’s would-be new golf course  bending existing laws? That’s a question for lawmakers and civil society.