For the first time ever, Goa gets to see one of its greats displayed!

For the first time ever, Goa gets to see one of its greats displayed!

It was interesting to note that few guests including Goa’s mainstream artists I spoke to at the Lancelot Ribeiro memorial retrospective art show had heard of him, or knew he  was artist Francis Newton Souza’s half bother. Lancelot kept that fact very much in the background, fearing that people would say he was riding on Souza’s coat tails.

And yet it’s almost impossible to discuss the work of the Goan expressionist painter who lived from 1933 to 2010 without touching upon the famous Souza, whose influence on Ribeiro’s life and art was unmistakable.

Among the most original Indian painters, Ribeiro settled in Britain after the Second World War and remained relatively unknown compared with other contemporary Indian painters living in London.

This is the first time Goa has had the opportunity to see Ribeiro’s work.

In 1964 his early painting titled Landscape with Trees, has boxy, topsy- turvy houses and vibrant tones, a pointy church steeple, skeletal leafless trees, townscapes, abstract landscapes, a series of powerful heads with an icon-like quality, portraits, and still life  with uncharacteristic brilliance and transparency. All this displays a clear relationship to Christian traditions, similar to Souza.

Fifteen paintings from 1963 to 1967 acquired in collaboration with Grosvenor Gallery, London, previewed at Sunaparanta, on 5th November. Goa’s art connoisseurs could not resist acquiring works priced between Rs.6,75,000 to Rs 22,50,000.

Living in Bombay, Ribeiro’s mother Lilia had his half-brother Francis by a previous marriage. Francis  moved to London in 1949, Lancelot followed in 1950, to study accountancy, abandoning it to study art at St.Matinn’s School of Art (1951-53).  After National Service with the RAF in Scotland and extensive European travels, he returned to Bombay and worked with the Life Insurance Corporation, while writing poetry. He began painting professionally in 1958.

The success of his first sell-out solo show at the Bombay Artist Aid Center in 1961 led to a commission for a 12-foot mural for Tata Iron and Steel.  He met and befriended the nuclear physicist and Nobel Prize-winner Dr Homi Bhaba, and  J R D Tata, the notable private and corporate collectors who supported  him over the years.

After exhibitions in Bombay, New Delhi and Calcutta, he was included in the “Ten Indian Painters” exhibition, an extensive tour through India, Europe, the US and Canada.

Souza indulged excessively in the delights of bohemian life, frequently abandoning works and leaving it to Lancelot to elaborate and finish them, only to then append his flamboyant spiky signature. There have been times when art connoisseurs disputed if the painter was Souza or Ribeiro. 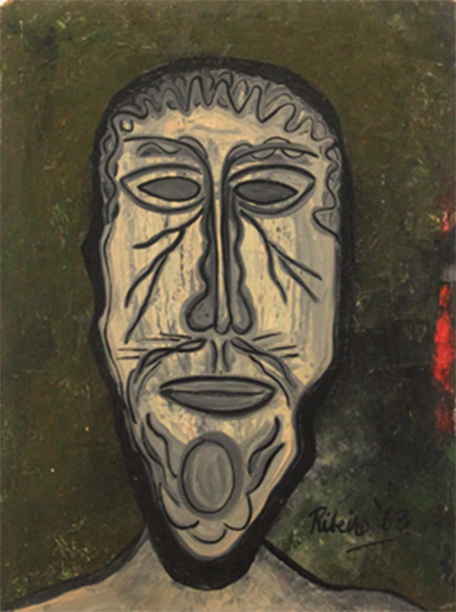 Ribeiro came into his own as a figure in London’s art scene after Souza left for the US in 1967, forming a personal artistic language. His works were displayed in Bombay, Delhi, Calcutta, various European countries, Canada and the U.S.

Though his works were with public and corporate collections, he lacked a prominent committed London gallery to foster his reputation. His daughter Marsha said in an interview, “I often asked him about that. I don’t think he knew how to represent himself or let others represent him properly. ”

Fading away from the art scenario during the last two decades of his life, he continued painting, confident the tide would eventually turn.  It has, and presently there’s a surge of interest from dealers and collectors.

Painting was his life and obsession. Extremely restless, he would paint through the night. A private diary scribbling found after his death encapsulates his disturbed frame of mind. “’I twist and turn, curve and straighten without aim or result. Just an escape, an escapist thing into painting impulsively, compulsively, endlessly, tired, tirelessly with or without joy,”
______

November 19th – Launch of  a monograph published on the artist compiled by British journalist/author  David Bukman, also at Sunaparanta.