Rafting is the perfect adrenaline rush

It’s Not the Monsoons, but Rafting is Back

And it’s a breathtaking experience

There’s good news for thrill-seekers and adventurers in Goa looking for that adrenaline rush and new frontiers to conquer: You can now go white water river rafting on the Tillari River. Where’s that? Just across the border in Maharashtra, near Dodamarg (only an hour’s drive from the North Goan beach belt). Most people in Goa have heard of the Tillari irrigation project and dam which has tapped the water from the Western Ghat mountains in that area. The Tillari canals, which occasionally burst, also supply water to a large part of north Goa and Maharashtra.

So there we were with John Pollard of Goa Rafting, one of the pioneers of white water rafting in India. Also coming along to ride the rapids were a group of Russian tourists. A few minutes after meeting up at Border Bar at the Dodamarg border check-post, and a few kilometres into Maharashtra, we were at the base camp. From there we trundled down some dirt tracks and soon reached the starting point, which was on the banks of a small stream joining the main Tillari River a few hundred meters downstream.

We were then given the basic instructions on how to hold the paddles and the different ways to row, and also briefed on safety aspects. Each one of us had to put on a life jacket and a helmet, and then we were divided into three groups, with each group on one boat. I was in one boat with two lovely Russian ladies, Julia and Aksana, and our guide was Sunil. As the Russians barely speak any English and they outnumbered me, all the instructions were in Russian, so I ended up picking up my first few Russian words! Forward rowing? vpered!  Backward – nazad. Hold on – derzhites.  Over left – nalievo. Over right – napravo. 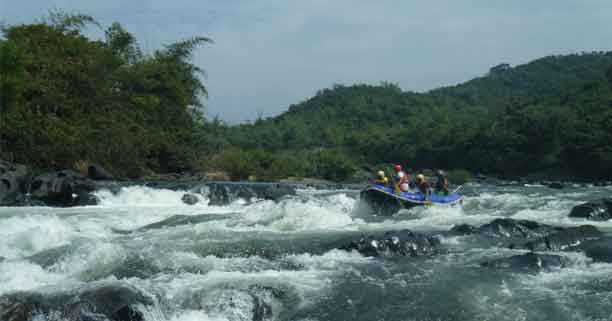 Coming down a rapid

The fun started before we even entered the rafts when John asked us to simply float down the stream for a few meters, so as to acclimatize us to the water. Then we were off rafting down the stream which had colourful underwater vegetation and all sorts of other interesting things to look at, and soon we were in the main Tillari River. There we did some practice rowing for a while, before heading off for the rapids.

White water rafting around the world is categorized into grades of difficulty, ranging from Grade 1 to Grade 6. Grade 1 is the easiest, with just a small amount of rough water. Grade 6 involves drops, rocks and waves so huge that trying to traverse them would essentially be akin to suicide.

The Mhadei is milder than the Tillari and is graded at Level 3, which means there’s white water and some waves, but a low danger level. The Tillari, on the other hand, currently has Level 4 rapids, which means more excitement, and also a bit of danger because the entire course of the river is rocky terrain, with huge rocks all over the river and under the water. (The danger is greatly reduced, somewhere to around zero, by the expertise and international-standard precautions provided by John and his team).

River rafting is only possible on rivers which flow downwards. Where we were in the Tillari valley, the river descends from up in the Western Ghats and flows down, all the time being fed by numerous other small rivulets and streams. At various points in the valley, the river suddenly descends sharply; those are the points which are known as rapids. 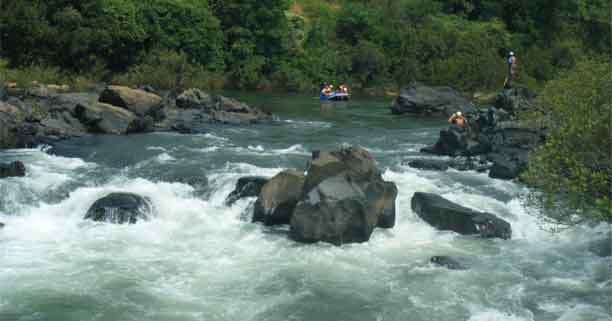 The rapids on the Tillari – five of them in the course John took us through – are progressively difficult, and by the time of the third and fourth rapid, John and the two other guides, Sunil and Mohammed, take positions on the river’s banks as one boat after the other navigates the treacherous rapids, with the boats getting tossed around in the rocks as the river descends to a lower level. The fourth rapid was actually a gorge, and the boat we were in actually fell down in a series of steps through the gorge as the water gushed down through the gaps in the rocks.

There are no words in the English language to describe this thrill! For any attempt – exhilarating, exciting, breathtaking, powerful, overwhelming – somehow falls short. Suffice to say, the Rs 2,600 each person dishes out for the rafting expedition (with lunch included) is worth every paise.

The river itself flows through a picturesque valley with ancient dark rocks carved by the passage of time into different shapes and sizes, many resembling human faces, like some massive work of sculpture. All around were thick jungles, and the only house we came across midway was a farmhouse belonging to a Goan, complete with a cross in front!

In between we took a couple of dips in the water and also got down from the boats to walk around on the rocks, as the guiding team did their safety drills. By the end of the journey we were all thoroughly exhausted, with all that rowing and rapid riding for more than three hours. Though it looks a bit dangerous in patches, river rafting, done under the watchful eyes of John Pollard, is a very safe experience. Still, you need to be reasonably fit because it’s no leisurely stroll in the park.

Alexei, one of the Russians in another boat, said, “It was a really wonderful experience to be rafting in such beautiful natural surroundings. I think more people need to know that such an activity is available for tourists in Goa.”

But with Goa becoming a preferred tourism destination with each passing year, John felt the future looked more promising in Goa. So he decided to promote river rafting here some years ago. The initial response from the authorities here, he says, was not very encouraging, and he had to wait till the new government came in before his proposal was accepted and he started river rafting on the Mhadei River in the last season, during the monsoon of 2012 when the river receives sufficient water for safe rafting. Rafting had to stop, though, after the monsoon because the water level reduces considerably.

He then began scouting around for another river where he could have river rafting during the dry season, and that is how he reached Tillari. How does he pick out the locations for rafting? Turns out he studies old Survey of India topography maps, most of them drafted by the British during the colonial era, and which have perfect measurements of mountains, valleys and rivers. Plus, of course, Google maps. And then actually exploring the river and the surrounding terrain. Tillari was just right as it’s barely an hour’s drive from the north Goa beach belt, epicenter of the tourism industry in Goa.

Says John, “It takes a lot of time and effort to get river rafting going because you have to know about the water flow throughout the year and so many other factors … You have to walk through the entire river’s length and decide the stretch you’re going to use. And then you have to set up the infrastructure, get a base for the boats, then take the boats every time to the starting point, inflate them up. On top of which you have to publicise the rafting trips, so that you get customers and recover your investment. All this takes a few years.”

When not rafting, this Englishman from the northern England city of Hull – once the busiest fishing port in Europe – spends a few days at a farmhouse in Castlerock, four kilometers away from the top of the Dudhsagar waterfall. River rafting, he says, is an extremely eco-friendly activity, because you don’t even leave a footprint. All you do is paddle down the river.