What A Treat To View His Work In Goa

What A Treat To View His Work In Goa

On Display Till Oct 28 at Sunaparanta, Goa Centre For The Arts

It’s not every day that art appreciators in Goa get to see the works of internationally-known artists. That’s one reason it was so wonderful to see the creations of Julian Opie, the renowned British visual artist, preview at Sunaparanta, Goa Centre for the Arts, on 1st October.

Another reason is that those creations are simply delightful.

On display is Opie’s “Winter” collection, a series capturing the landscape from a circular walk taken by the artist in the countryside of Lore Valley, around his house in France on a winter’s day.

Opie’s graphic portrait style and use of computer-aided design enable him to move between contemporary art and commercial design. The images were first captured through drawings and photographs, then transformed through the use of computer technology.  The art is subtle and cerebral. It’s a “field” of vision, without a central focus, emphasizing the flatness of the surface, playing on the tension and interaction between overlapping colour fields.

He was inspired by a terminal at London’s Heathrow airport, which is enclosed with painted glass panels, to present this series in frameless panels.

Incorporating an eclectic range of influences including 17th century Dutch landscape painting, the pallet in shades of grey, brown and green combines slick architectural surfaces with the depth of the landscape, which seems to float, drawing the viewer into collaboration with the artist. 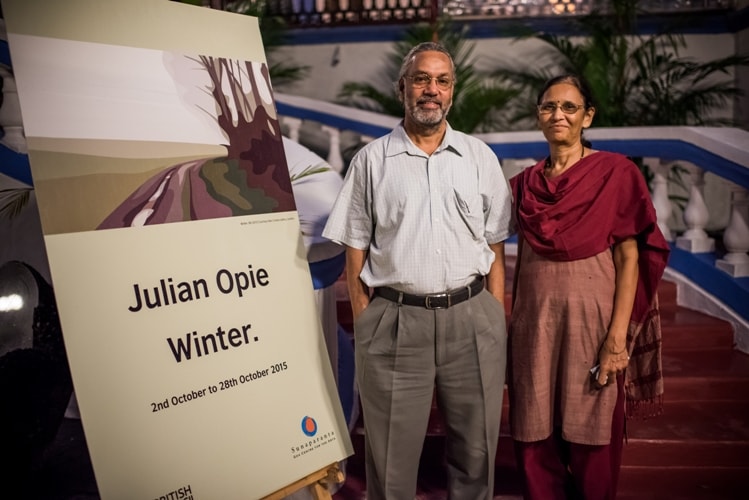 Some guests at the preview felt the paintings looked alike. But, they needed more than a second glance. Studying the sequence, you uncover the subtle changes in the countryside, connecting humans and nature in perfect correspondence with the underling vision, leaving room for interpretation.

Opie was born in London, in 1958, and graduated from Goldsmith’s School of Art London, in 1982.  Producing a series of painted metal sculptures that humorously combined loosely painted imagery with steel shapes, he emerged as an influential figure in the British art scene of the 1980s.

Portraits and animated walking figures, minimal detail in black line drawing, is the hallmark of his style. His themes are described as “engagement with art history, use of new technology, obsession with the human ‘body’ and ‘work, with one idea across different media’”.

Opie has several public installations around the world.  His four-sided LED sculpture ‘Ann Dancing’ was the first artwork installed on the Indianapolis Cultural Trail, in 2010. He has exhibited nationally and internationally at major museums and galleries. His first big project with the British Council was the Indian Triennial in 1997. His solo exhibitions include the Sakshi Gallery in Mumbai (2012).

“I am lucky to exhibit widely in India. Over the years, my family and I have fallen in love with India – the landscape, historic art and architecture, the people, weather, and food. This project depicts a cold, quiet Northern European landscape, which I imagine will contrast strongly with the coming venues. I hope the contrast will be refreshing,” Opie said. 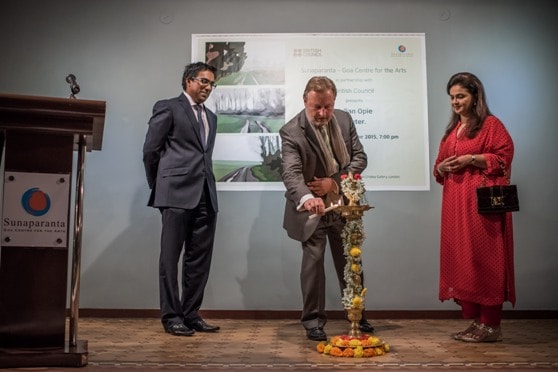 Siddharth Shanghvi, the recently appointed curatorial adviser to Sunaparanta, introduced the event. “When the British Council approached me with a view of hosting Julian Opie in Goa, the choice of venue was clear. Sunaparanta is a vibrant venue for the arts, and Opie’s work is singular. He is rightfully celebrated internationally as a vanguard and brilliant artist.”

Isheta Salgaocar, Program Advisor to Sunaparanta, introduced the personnel from the British Council in Mumbai, who attended the preview. Mr. Dattaraj Salgaocar, Founder and Chairman of Sunaparanta, said he was delighted to show a world-class artist whose vision is transcendent and whose Winter series indicates a master working at the height of his artistic powers.

Mr. Rob Lynes, Director British Council – India, joked in his talk that “on my way in someone thought I was Opie!’ After some laughter, he said, “It brings us immense pleasure and delight to showcase Julian Opie.”

The British Council has had a presence in India for 67 years, but this is the first time it has organised an exhibition in Goa. Art and culture are an integral part of British Council’s Re-Imagine initiative.

Mr. Kumar Iyer, British Deputy High Commissioner, explained, “To appreciate Opie’s work, you have to understand what the artist feels, and the way he sees the world. There is a huge Indian presence in art and culture in the UK, and these events give us the opportunity to build a relationship between our countries. We look forward to more events under the stewardship of the British Council with Sunaparanta.”