Mediation can help solve a court case in your own lifetime

Mediation can help solve a court case in your own lifetime

As one drives by the beautiful but lonely looking old houses in many villages in Goa one may safely assume that many of these are under litigation. Family disputes over properties and assets seem quite commonplace in Goan families, as evidenced by the huge number of cases in courts running even for decades!

“We had three generations go through this court battle between members of the same family, before we finally decided to settle mutually,” mentions Ms. Vaz, an octogenarian from Velim. “If these new daughter-in-laws had good intentions, things would have not been like this,” asserts her neighbour Sophie, as old as Ms Vaz. Clearly, even at the fag end of their lives, litigation has not resolved disputes.

This is one social problem that has been recently explored by Irineu Gonsalves, an ex-footballer and businessman, through tiatr, a century old Konkani theatre form. Irineu’s first tiatr addressed the issue of Goans not being able to buy land in their own state. He had propagated a concept of land banks developed by Goa’s Communidades solely for Goans as a viable solution. His latest tiatr ‘Modhli Vatt’ (The Middle Path) discusses a concept that could solve 90% of the world’s problems, he says.

Irineu believes in the concept of mediation instead of litigation. Mediation is an agreement reached by the aggrieved parties. Solutions to problems are always there, it’s just that there is no dialogue and communication. A mediator’s tact can allow each of the disputing parties to come mid-way, to reach a solution that is beneficial to all. Litigation however does not allow the person at fault to get away and penalizes him or her. A good mediator allows the persons at fault to come down from their high horses by meaningful ways of dialogue.

If there is one word that could solve all the problems in the world, it is communication. Conflict breaks down communication. Reinstating this exchange brings about the first desired change. If one only focuses on the opposing party paying for its faults, then the desire to solve the problem may take a back seat. However, the very point of mediation is to solve the dispute, not just bring the guilty to book. So the first approach to mediation is to melt down the stalemate.

“Relationships are saved by mediation, as compared to litigation,” Irineu points out. “Then again, it is also less expensive a procedure. By finding a middle path, relationships are restored. Litigation leads to financial ruin, spoils peace of mind and has an adverse effect on the health of the litigant,” he adds.

Irineu’s tiatr advocates mediation through the media of comedy, songs and other techniques within the set format of a tiatr,” Creative Director Sandeep Kalangutkar reveals how a sugar coated pill formula has been adopted to get the message of mediation across to the masses via tiatr, the most popular medium in Goa today.

At the end of this tiatr popularizing mediation, leaflets are distributed with some valuable suggestions given, such as setting up of training centres for those who aspire to be mediators by the governments of Goa. ‘The Goa University too should conduct a Diploma course in Mediation in collaboration with the government and the Judiciary for those who desire to be Mediators,’ reads an excerpt from this leaflet.

“A mediation course of 3 to 6 months can also be created with certification at the end, in my opinion,” Justice Shri P.K. Mishra from the Goa Human Rights Commission echoes. He is a former Chief Justice of Patna High Court with experience in Madras, Orissa and Delhi courts and has given training sessions in various other parts of the country. He supports the creation of a mediator position in every panchayat body so as to solve disputes at the local village level itself, as mentioned in this leaflet from the tiatr. 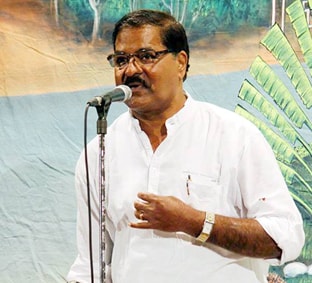 “In fact, the khap panchayats, that many may have heard of, were actually made to do such mediation way back. However, they seem to have overstepped their boundaries and thus things have gone wrong as one can view from the news about them on television and the news media in the present times. The panchayat body dealt with disputes with mediation being part of their approach. But the experience of the khap panchayats is the flip side of things in this very context,” says Mishra. “Even our villages earlier were governed by ‘Dha Zann’, as in ten elders whose word was simply law,” recalls one of the senior caste members of this troupe.

“Other options from the judiciary like reconciliation and arbitration are on similar lines of mediation, although all these three are distinctly different from each other,” Mishra clarifies. “The process of mediation however, is to initiate communication between disputing parties where communication has failed before. Family disputes mostly arise due to ego issues,” he mentions from his vast experience as a lawyer first and then as a judge.

“Most importantly, the mediator should not be connected with the profession of a lawyer. Having been a lawyer myself, I know for a fact that the psychology of the advocates and lawyers is different; their very approach is different. As such mediators should not be drawn from this profession, as is done in Delhi where mediation services are exist with specialized firms but run by lawyers. There is a need for a certain amount of law to be known, but not in all cases. Family disputes for instance need more psychology trained professionals to solve disputes rather than laws. The Madras High Court too has about 15 to 20 mediators connected with itself, but again all connected to the legal profession.”

“Legal literacy on the whole should be encouraged.” Mediation can only be limited to civil disputes, with very less scope in criminal cases, except in regards to minor offences, he opines. Hence official training centres and formal courses for mediators are needed. “But in India, every education is connected with employment,” he brings in a worthy disclaimer even while he admits that the courts have prescribed fees for mediators as well. The fees however are less compared to litigation, given the less time involved in this affair.

And he concurs with Irineu’s ideology of mass awareness of this concept. While Irineu does it through tiatr, a court recently directed Bollywood actor Saif Ali Khan to resort to mediation for his street brawl with another Indian businessman at Taj Hotel in Colaba in Mumbai.

The Beagle conflict of 2009, for instance is a good example of successful international mediation by Pope John Paul II when Argentina refused to accept the judgement of the international courts in favour of Chile. Mediation sorted things here forever, thus averting a war.

Most insurance claims are disposed through mediation in foreign countries. As regards mediation in India, Justice Mishra says it all seems very practical but yet in theory, this concept has not reached the masses. “After all, people have to be open to this concept, for it to get into action and work successfully. Mediation is all about the philosophy of neutrality and being fair.”

If all cases pending by the Indian courts were to be expedited, this would take about 350 years. But good mediation can help end such cases in our own lifetimes.