In the eastern corner of Goa, < in the taluka of Sattari, abortion lies a piece of paradise.  An old fashioned gate made up of bamboos welcomes visitors into the farm.  A rustic shack serves as the office in which is placed a long table packed with various farm products. A little away sits the... END_OF_DOCUMENT_TOKEN_TO_BE_REPLACED

In the eastern corner of Goa, < in the taluka of Sattari, abortion lies a piece of paradise.  An old fashioned gate made up of bamboos welcomes visitors into the farm.  A rustic shack serves as the office in which is placed a long table packed with various farm products. A little away sits the farmer with green fingers and a deep love for this red earth. He is Father Inacio Almeida, cure a seventy year old priest from the Pilar society. He’s been greening this piece of land for the last four and a half years.

“When I arrived here the locals were disappointed,” says Father Almeida. “They mumbled that this desolate place has neither a doctor on call nor a pharmacy and how will this old man survive in this wilderness? But soon they realised that the old man’s bones were still strong.”

“Staying in this farm, I have been transformed from a priest to a doctor.  People come here with diseases like ulcer, cancer, arthritis, fibroids, colloids, aids, common cold – all this is cured by this one tree that we grow here. The tree is Simarouba glauca.”

Simarouba glauca is an important tree species growing in the forests of Central and South America. Natural bureau of Plant Genetic Resources first introduced it in 1960s in the Research Station at Amravati, in Maharashtra. This was brought to the University of Agricultural Sciences, Bangalore in 1986 and systematic Research and Development activities began from 1992 onwards.

Father Almeida has taken it upon himself to grow this plant at the farm abundantly, harvest its various components and make available the medicines to the people. He also has a nursery of the same and saplings are available at the farm. Every single day, people from all walks of life and from all over Goa flock here. He patiently listens to their woes, counsels them and prescribes the right medicine. 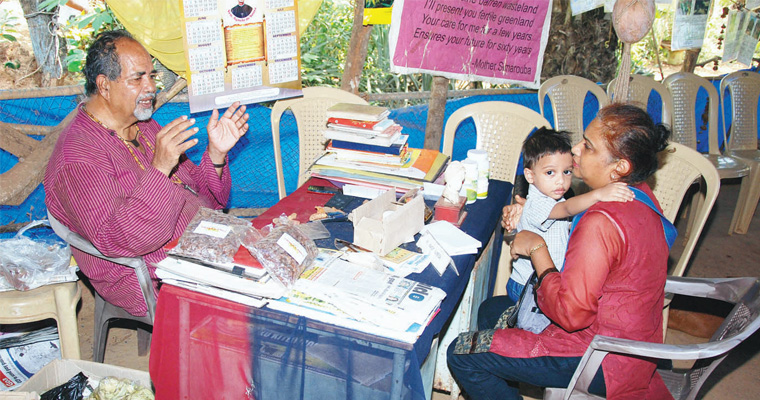 “Its leaves bark, and fruits are taken and people have been cured. Doctors from Manipal send the patients here. Within three months, cancers of the intestines have been cured. People bring the certificate from the doctors. On Thursday we go to Pilar with our stack of medicines to serve those who cannot make it to the farm,” he informs.

Father Almeida laments that after Liberation in 1961, pharmacies have sprung up everywhere and for even the slightest cold, people pop pills. “Earlier, local medicines were available but were neglected after the revolution of the pill. It is only recently that the side effects of these drugs are raising their ugly face and that is drawing people to these (local/herbal) medicines again. Some Christians who used to practice this art have carried away their secrets to the cemetery and the Hindus to the crematorium. We have researched through old books and taken help of old practitioners and collected the recipes. Now we also give medicine for diabetes and cholesterol, acidity, face cleaning against pimples. A book has to be written but we are always short of time.  But for that, one requires the blessings of God. All this good work happens through the hands of God only. “

Zagati Nature Farm as the place is known belongs to the Archdiocese of Goa. It has been handed over to the Pilar Fathers as a mission station. However back in 1947 there was a centre here for unwed mothers. The children of these mothers were taken into the care of Father Amar Pinto who was responsible for the centre. Later, it became a boy’s tuition centre. Father Ferrao took charge next, and cultivated sugarcane. He was concerned about the poor local populace, where each family had many mouths to feed. He helped feed them with the jackfurits and mangoes that grew on the farm. He also distributed American wheat and milk that came from abroad. He encouraged them to buy his locally made jaggery for 25 paise.

“So this centre has always had concern for the need of the people,” informs Father Almeida. “Even now, the locals collect the mangoes and prepare a dish called sansu.  The jackfruits are of high quality and ripen in June in time for the voje of San Juan.

Father Almeida opines that the forest department should use this tree extensively. “Simarouba glauca can be grown everywhere. It is a wonderful tree that does not need much water. Acacia on the other hand which is planted to green areas, sucks up the ground water and dries the springs around it. It is a faulty decision to plant Acacia. They should gradually remove such trees or they will soon dry up all the ground water. No birds nest on these tree. It does not even provide food for the birds. This was a trick to fool the people to allow the mining giants to plant these cheaply available trees and show the greening of the dumps.  They cut our local trees; dig up the earth for the ore and then dump it on more trees, further destroying the forest. Birds have no fruits, rabbits have no shelter, so the big cats have began venturing into the villages. People used to plant fields and live happily. Now the gaurs stray into their fields and destroy them.”

Father Almeida feels that all these ill effects could be reversed by substituting the Acacia with Simarouba glauca.