Growing up in Goa in the 1970s and ’80s, viagra buy I became aware that I was part of a “sandwich” generation:

Growing up in Goa in the 1970s and ’80s, I became aware that I was part of a “sandwich” generation:  caught in the middle of a radical transition in Goan society. The social structure was being eroded by increasing consumerism, the abandoning of traditional implements and practices, ambulance and loss of self-sufficiency due to an increasing dependence on modern technology and mass produced goods.

In our house, kerosene lamps and flooring of cow dung and red oxide were replaced by electricity and china mosaic tiles. In the kitchen, wood-fire stoves made way for gas cooking ranges, stone grinders were replaced by electric mixers, earthen pots and cane and wooden containers were thrown onto the rubbish heap or bonfires. In the village you could see tiled roofs being knocked down to make way for concrete slabs and the palm-leaf mats that protected mud walls from the monsoon rain replaced by plastic sheets. 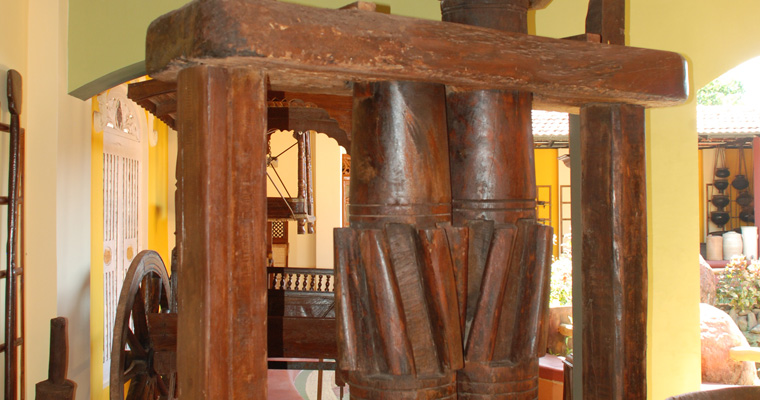 There was a drop in farming activity and fields were converted and filled in with earth gouged from neighbouring hills to create football grounds, housing plots and so-called public development, which caused flooding that made going to school difficult. Country taverns that dispensed quick shots and used to be places for leisure after a hard day’s work, where the farmer would have a drink, catch up with village gossip and play a game of tabullam or gangifo, became bars where local craftsmen, unemployed because their services were no longer needed, sat idly and slowly turned to drink to drown their sorrows. These makers of tools and utensils who once made the village self-sufficient, the keepers of knowhow and skills handed down from generation to generation, would be the last of their kind.

The church angelus bells which were once very audible were drowned in the din of motorised vehicles. The baker who once alerted buyers with a pestle with metal clappers (mussol) now used a loud rubber horn and the village crier changed his drum for a loud bell. The wares on sale at village feasts that used to come from local sweet makers and artisans were replaced by commercially made produce from across the state. 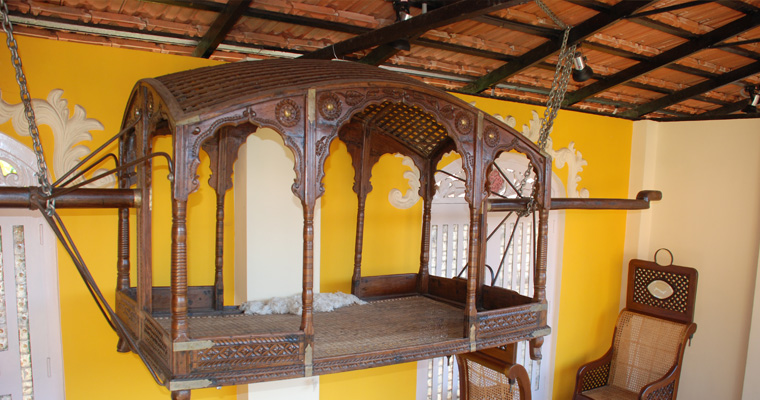 The passage of “progress” first became clear to me from looking at the cupboard where my mother carefully stored her six children’s toys after they had outgrown them, one shelf dedicated to each child. I could see how, within the span of about 15 years that separated the eldest and youngest, the materials used had changed from wood to metal to plastic.

The most neglected and untouched corners of people’s houses, as in our house, were the storeroom (loz) and the wooden loft (malo). Off limits to me as a youngster, I found these places for broken and discarded things to be stores of treasure when I first got to explore them as a teenager. Different types of clay pots and baskets neatly preserved and stacked, tools, old altars and wooden chests filled with clothes from a previous generation – like my grandfather’s sharkskin coat.

I collected these things that had been thrown away because my fascination with them persisted even after they were considered obsolete, starting with tools and gadgets of various kinds, such as valve radios that were discarded for transistor radios. 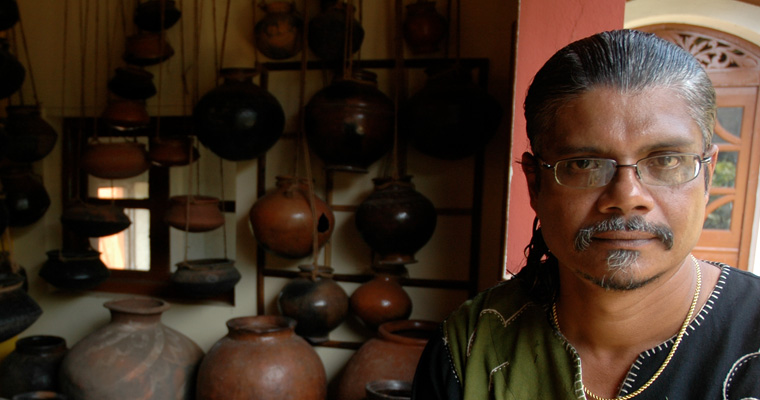 I used to pull out some of these old implements and stare wistfully at them, thinking how incredible it would be to learn more about them some day. I wanted to know about the type of wood used (hard or soft species? local or imported?), find out exactly how old they were, whether there was pollen embedded in the wood that could reveal what plants were growing in the fields where the tools were used, whether there was wear or polish that could confirm their function, or other marks that could tell me more about how they were made and identify their makers.

Despite my lifelong interest in traditional Goan implements, I only realised their true value while based in Lucknow as a painter. While there, I got the chance to accompany a researcher from M S University in researching tribal art and lifestyles in various places in North India. My interaction with the tribals opened my eyes to the hard work and skill that went into creating their implements, and the understanding of materials it required. I realised that the things I had seen discarded in Goa must have similar fascinating stories behind them.

On being offered a Lalit Kala Academy scholarship, I pushed full speed ahead with my studies of art and restoration. I returned to Goa and became the founding curator of the Museum of Christian Art  – a project that was proposed by Mario Miranda to O P Agarwal, the director of Indian National Trust for Art and Cultural Heritage (INTACH).

My stint at the museum involved approaching churches across Goa, doing inventories of their artefacts, and procuring some of them for the museum. It was fun to restore these objects and learn about the materials used to create these priceless works of art. I could see the shift in style of artisans from creating Hindu artefacts to Christian depictions.

I was shocked to find that artefacts of artistic and historical value were being neglected in churches around the state. Some priceless pieces were even being used as door and window stoppers. Travelling from village to village, I not only got to witness different activities and rituals that made up part of village life but also how, as in my own home, traditional implements were being thrown out or left to decay in many old Goan houses. This focused my passion for collecting items of cultural and heritage value, and a determination to save whatever I could of Goa’s heritage. 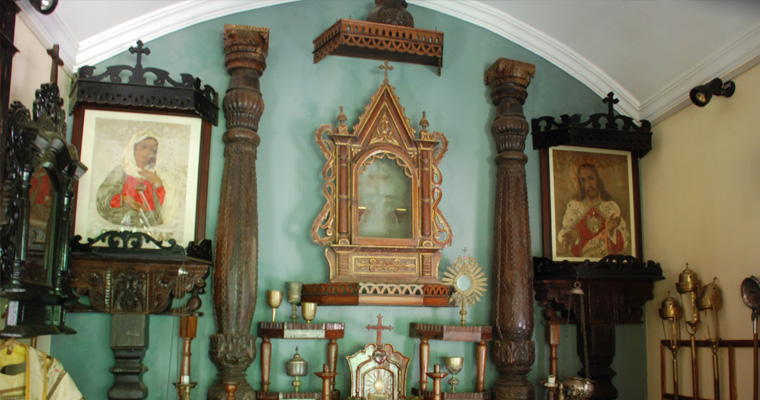 My collection increased greatly after I began restoring old Goan houses in 2002. As in my own home, I saw how people had lost all value for the things of old. House owners who were moving out after selling their homes would take with them commonplace items like plastic chairs and aluminium pots and leave behind beautiful but broken old furniture, traditional clay and woven household implements, tools, weights, measures, altars – all of which are now irreplaceable and priceless. It became an obsession to visit the forgotten lofts and storerooms of relatives, friends and whoever else would allow me to explore.

There were times where I cleaned and organised people’s storerooms in hopes of finding something of importance to my collection. These mostly broken, half-decayed objects I gathered and restored. To restore some items to their authentic original state I had to consult elders who were familiar with them and had actually seen them in use. Because finding such people was not easy in urban areas, I accompanied friends on trips to remote parts of Goa where the knowledge I needed had not yet been erased by the march of modernisation. These trips also helped to widen and complete my collection, especially of farming and household implements. Sadly, changes in the Goan economy and society had rendered such implements obsolete in these areas as well.

With the realisation that our heritage was being lost without being properly recorded, my passion for collecting old artefacts, and especially all the facts related them, became an obsession. My collection now includes agricultural tools, artisans’ tools, household implements, kitchen implements, furniture, clothing, jewellery, musical instruments and modes of transport, all of which were once in common use but can no longer be found, either because they have fallen out of favour or because the skills needed to make them have died. This knowledge is the invisible heritage that we are discarding today. In the space of a few decades, modern technology has usurped know-how that had sustained us for centuries.

The importance of showcasing such information for others became clear, and hence the idea of setting up a museum of Goan ethnography – Goa Chitra.

In planning the museum, I gave importance to the concept that it should represent the implements, tools and the material culture of Goa so that it tells the story of the people of Goa. Importance is given to the various trades of the Goan people. Every implement on display is supported by data from in situ research and conversations with village elders, farmers, artisans, historians and academicians. Most of the exhibits on display are rare and were difficult and expensive to restore. Their conservation and maintenance are recurring costs and require substantial allocation of funds. The museum has been a self-financed project so far, but to continue and widen its mission now requires outside support. The hope is that every Goan across the world sees this project as a showcase of their ancestry and will come forward, either as individuals, groups or in their official capacity, to preserve and celebrate the history of the Goan identity.

Since its opening three years ago, Goa Chitra has had over 2,00,000 people visit the museum and has gained local, national as well as international media attention. ‘TIME’ International graded us as a must-see place. This project has been the recipient of two International awards: The Fundacao Orient scholarship 2009 (Portugal) and the V.X. Verodiano Award 2009 (USA) for persons who preserve the well being of mankind in the field of art, music, literature, science, medicine or humanities.

Almost reaching its completion and waiting to open soon is Goa Chakra, a transportation museum, which celebrates the wheel as the symbol of India’s rich culture.

The first of its kind in India, Goa Chakra, is set up to preserve and showcase our ancient modes of transportation and to document the rich heritage of the wheel. For a country which bears the Ashoka Chakra at the centre of its national flag – the wheel of the law of dharma or truth, and satya or virtue, was conceived as the guiding principle for those who pledged allegiance to this flag. The wheel also denotes motion and the belief that there is death in stagnation and life in movement. The chakra symbolizes much more than just carts and carriages; it celebrates the wisdom of our ancestors, their ingenuity and their love for beauty and art.

Goa Chitra has grown bigger than what I had envisioned and for it to keep growing and sustain for posterity, we need the support of like-minded people.

It is with this hope that this journey continues.