Can the drivers – and Goa – adapt to a changing tourism universe?

Can the drivers – and Goa – adapt to a changing tourism universe?

Anybody who has used the services of a tourist taxi in Goa might have experienced a variation, though perhaps less extreme, on the following story. Yulia, a svelte young Russian tourist, had taken a taxi from Calangute to Morjim. When taking the taxi, she was told the fare would be Rs 1,000, which she thought was way too high. But she had to get to Morjim to visit her friends. As time was precious, she took the cab.

At the end of her journey, when she started to pay, the cabbie demanded Rs 2,000, saying she had to pay the extra amount since her friends were staying in a remote corner of Morjim. Shocked, she refused. The next thing the cabbie gave her a hard slap and told her that if she couldn’t pay the money, she could pay with sex if she liked. Frightened, and with hardly any souls around, she simply paid the extra amount.

In recent days, the taxi owners and operators went on strike demanding that the government concede their demands, nearly paralyzing the tourism industry and generally running riot, forcing Chief Minister Manohar Parrikar to announce that the government would concede most of their demands. Otherwise, said the taxi owners, they would disrupt this week’s carnival celebrations which attract lakhs of tourists.

The strike turned violent this past week, when around 20 people – five policemen, five journalist and about 10 taxi operators – suffered injuries during street battles in Porvorim pitting lathi-wielding cops against around 300 stone-throwing taxi operators. A number of vehicles were also damaged. This was just the latest in a series of violent incidents involving taxi operators stopping vehicles and roughing up tourists – a significant affront to the tourist-friendly image Goa is striving to project.

There’s no doubt the drivers have reason to be upset. Most foreign tourists these days come from Russia, and they’re ferried around in buses run by large tour operators who have no use for local taxis. Car and bike rental businesses have mushroomed, offering cheaper and more convenient transportation alternatives.

In April last year taxi union members took strong exception when an MLA said in the Goa Assembly that the taxi operators are a bunch of thieves who are spoiling the image of Goa as a tourist destination.

Vasu Arlekar, president of the powerful North Goa Tourist Taxi Owners Association, says, “We’re not thieves, it is the MLAs who are the thieves. It’s the TTAG (Travel and Tourism Association of Goa) who’re the thieves.” Everyone in the tourist industry has noticed a reduction in the number of high-spending tourists coming to Goa, and Arlekar blamed this on members of the TTAG who charge exorbitant room tariffs during the peak season. “Why don’t they charge a uniform tariff for the whole year? Why are they only asking us to put meters and charge uniform rates all through the year? Because they charge exorbitant rates during the peak season people have stopped coming to Goa, not because of the taxi drivers.” 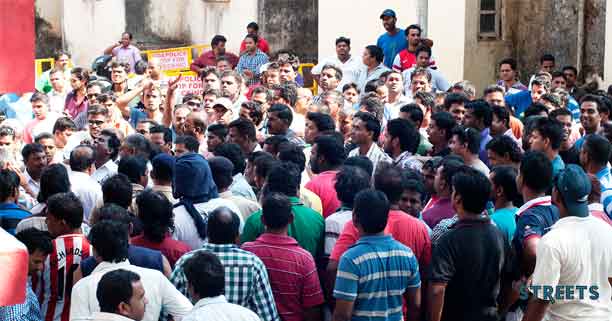 A group of taxi owners outise the Pernem police station

Vinayak Nanoskar, general secretary of the taxi association, said, “There are thousands of taxi owners and drivers in Goa. Out of that maybe there will be a few bad elements. That does not mean you can call all of us cheats. We too work hard and earn our money, we also have our self-respect.”

Steve Sequeira, a Goan from Delhi who uses the taxis frequently, doesn’t think there’s any excuse for the recent behavior of the taxi providers. He says, “The taxi drivers give a wrong image to people at large … Tourists have a fear of taxi operators in Goa.”

While the government has made sporadic attempts in the past to bring about some order in the tourist taxi business, it is market developments which have given the taxi operators something of a rude awakening. One factor was the growth of the rent-a-bike and rent-a-car business which gave tourists an alternative to hiring the taxis. Another factor is the rise in the number of tour buses which bring in tourists, especially from Russia, from the airports/railway stations to the resorts and also ferry them on sight-seeing trips.

This isn’t the first time the operators are resisting challenges to their hold on the tourist transport business. They demanded and got the government to put a moratorium on rent-a-bike operators two years ago (meaning no new licenses have been granted, with only existing ones in effect), and now want a halt to rent-a-car operations too.

Vasu Arlekar says, “Nowadays tourists who come to Goa pick up a rental car at the airport or railway station itself, drive all over Goa for some days and go back. Where will we get business? People with huge amounts of money are buying 200 cars at a time and renting them out.”

Calangute MLA Michael Lobo, who has been backing the taxi owners, says, “These kinds of car rental services are not meant for small states like Goa. One person buys 50 cars and rents them out; this way only one family is making huge amounts of money. But 50 taxi owners with one car each can feed 50 families.”

There are other issues too, some of which may be sorted out during the current series of meetings between the government and the taxi owners. For example, technically the taxi owners are supposed to operate their taxis from home; tourist taxis cannot be parked along roads to solicit customers. Says Arlekar, “The government asks us to give affidavits that we would be operating our taxis from home – will we get any business if we sit at home and wait for customers?”

The government has now agreed to waive off this condition, though in practice it was not enforced anyway. Which has of course led to another problem: where do they park their taxis? Says taxi operator Ravindra Vengurlekar, “Earlier, new hotel projects would make a provision for parking of some tourist taxis in their property and those taxis would be ‘attached’ to those hotels and get some business, but nowadays the new hotels are not making any parking provisions in front of their hotels.”

There are many other issues, the biggest one being the ‘high’ fares charged by the taxi owners. But with the Lok Sabha elections coming round soon and the ‘local’ taxi drivers being an important vote bank, the government this week gave the impression that it has conceded most of their demands. Cleverly, Chief Minister Manohar Parrikar qualified all that by saying none of his concessions could be implemented until after the government works out a new elections ‘code of conduct’ in the coming days.

Or until the taxi operators take to the streets again.