Goa’s own Subodh Kerkar, a renowned installation artist, is a pioneer in ‘land art’. He’s also the first Goan artist to be invited to give a lecture at the prestigious Van Gogh Museum, in Amsterdam. Kerkar will deliver his speech there on June 10, 2015.

During the same journey to Europe, Kerkar will also display his works featuring thousands of mussel shells at the “Mesdag Collection” at the Hague.

“The ocean is my muse, I use shells and sand as my medium, the sea shore is my canvas, and my bond and inspiration comes from the resources of the ocean. I believe you work with ‘subtle intervention’,” he explains, adding that when you do land art, you do not destroy nature.

His topic for the lecture is ‘Ocean and Art’. He will explore how his works have been inspired by the sea. The lecture will be attended by students persuing art courses at the Van Gogh Museum, and also by art lovers in general.

Hendrik Willem Mesdag was a great admirer of the sea and has a collection of numerous paintings of landscapes inspired by the ocean at the museum named after him.

Kerkar is showing his work at the “Mesdag Collection” in a group show titled ‘Sea-dogs and Beach Guests’, which is curated by Celine Ariaans.

The theme is depictions and responses to the oceans by contemporary artists, who do semi-abstractions and installation art (three-dimensional works that are often site-specific and designed to transform the perception of a given space).

Kerkar has decided that his medium will be 25,000 mussel shells which he plans to procure in Amsterdam.

Prior to that event, he will also be exhibiting in a show in Denmark. “I plan to use green mussel shells, which we get in Goa. Yes, I’m taking them with me, and I want to intermix them with the blue and black mussel shells they have in Denmark”, he reveals. 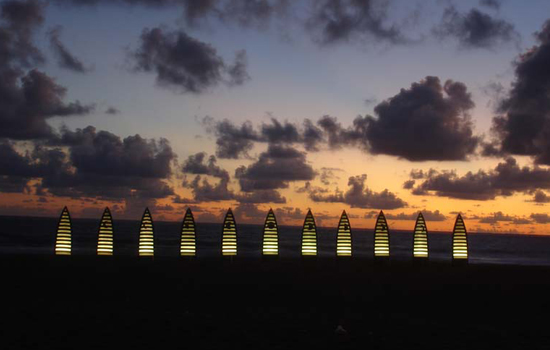 The moon and the tides

Kerkar’s speech is part of an initiative by Edwin Becker, Chief Curator of Exhibitions, and Els Reijnders, Project Manager (The Art of Making Art Exhibitions), at The Van Gogh Museum.

Kerkar began his artistic journey in 1988, as a commendable water-colourist and was much sought after for his landscapes, inspired by scenic Goa. The son of Goan artist Chandrakant Kerkar, the younger Kerkar gave up a career as a medical doctor to pursue visual art. He is in the process of establishing an art centre in Pilerne, Goa, which promises to be one of the most important contributions to the state’s art scene.

Constrained by the canvas and its two dimensions, he began exploring installation art and land art (also known as earth art). Earth art was a movement which emerged as a popular art form in the United States, in the 60’s and 70’s. In it, landscapes and the work of art are inextricably linked.

Among those who have inspired Kerkar are artists Alan Sonfist, James Turell, Carl Andre and Richard Long. 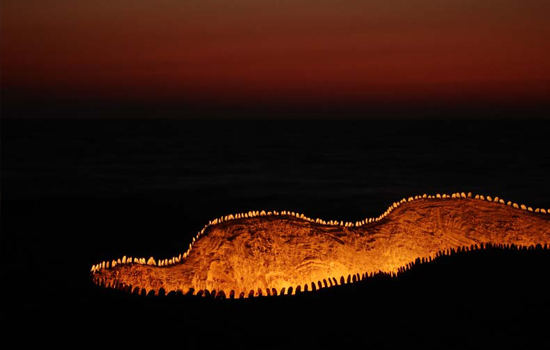 Over the years, he has participated in various exhibitions on beaches in Dubai, Amsterdam, Germany, Macao, Norway, Australia, Mumbai and Goa.

“My father, Chandrakant, was a popular artist in those days and he always painted outdoors, and as a child I accompanied him.  Many times we landed up at the sea, and it always fascinated me, and continues to do so,” says the artist.

Subodh was ecstatic when he was invited to lecture on Land Art, just as he was when he was asked to conduct a workshop titled “Present and the Past” at Shantiniketan, Kolkata in 2011.

“For me, to be the first — and to date, only — Goan artist to be invited by this prestigious institute (Shantiniketan), which is the Mecca for artists, was a great honour”, recalls Kerkar.

The workshop with the students encompassed personal and collective influences of “visual and audio feelings of incidents” in the students’ lives.

Subodh’s imagination blends with romantic idealism, weaving fantasy and reality in sync with the rhythm of the waves. His sensibility cuts across space and time, and the result is a captivated viewer. 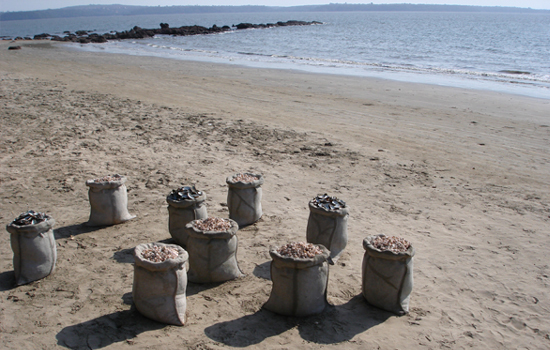