For many years I have desperately tried to make my son eat salad and other green, malady leafy vegetables. I added his favourite fried bacon and tuna to the greens. I tried convincing him by explaining how good green vegetables are for his body; I tried promises and threats before finally giving up.

Some time ago, physician I got inspired to a new effort. Wendell Rodricks, not only a gifted fashion designer but a gourmet as well, sent me a recipe for a meat loaf which was loaded with different kinds of vegetables and spices. Then I watched Rachael Ray who showed how you can hide vegetables in minced meat dishes. So I decided to start another attempt to get the healthy greens into my son.

My first experiment failed miserably. I had mixed boiled sweet potatoes, carrots, spring onions and leeks with minced chicken and fried these burgers in a pan. Unfortunately they turned dark outside before they cooked through. I did not mind the sweet potatoes, but my men flatly refused to eat these burgers. Luckily our dogs are not so discerning when it comes to food.

I kept on thinking which vegetables would make a nice mix and had the idea of testing rucola or rocket salad, like the English call it. I love rucola in salads or just plain with a fried piece of fish. When we are in Italy, many times our dinner is simply a lovely steak with rucola and cherry tomatoes on the side. Nowadays you can find rucola quite frequently in the market.

I had never heard of cooking rucola but decided to give it a try – and it worked. My son ate them without complaining – although my husband kept on asking me about the strangely green colour of the burgers. I avoided answering this questions until dinner was over.

It seems, at long last I have found a way to get some green leafy vegetables into my darling’s belly – without a fight. 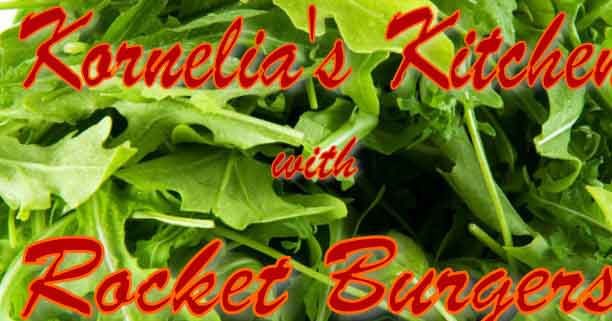 Wash the rucola and the basil. Cut the end of the stems of the rucola and sort out all yellow or damaged leaves. Remove unblemished basil leaves from the stems. Clean the spring onions. Peel and cut the carrots into pieces. Chop the vegetables and the basil finely in a blender. Put them into a big bowl. Add the chicken mince, the oats, the flour, the eggs, the crushed garlic and salt and pepper according to taste. Combine all the ingredients well. You should have dough which you can form into burgers. If it is too soft, add some more oats.

Spread the olive oil over a cookie sheet. Put the sesame seeds into a plate. Form the dough into flat, round burgers and roll them in the sesame seeds so they are covered well on all sides. Place them onto the oiled cookie sheet. Bake the burgers in the oven at 190 degrees for 40 minutes. After 20 minutes flip them over so they cook through evenly. The sesame seeds should show a lovely, golden shade. Enjoy! 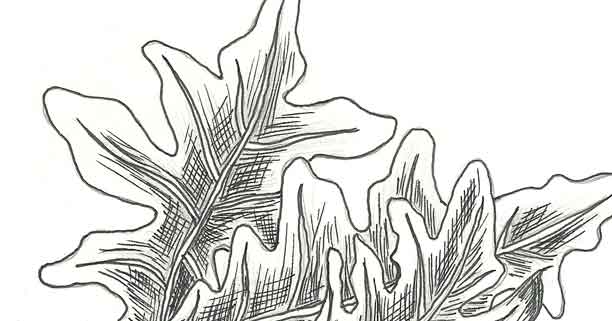 Rucola, Arugula, Rocket salad: The Mediterranean plant with the scientific name eruca sativa is known under many names. Already the Romans enjoyed rucola, like I call it. They considered it an aphrodisiac. However, it was not cultivated on a large scale or scientifically explored before the 1990s.

Nowadays, rucola is widely used all over the world. Italians love it as a pizza topping which is added after baking to avoid wilting. On the Italian island Ischia people make a digestive liqueur called rucolino from the plant.

There is no other green edible leaf which carries such a rich, peppery taste. This taste indicates the hidden treasures of rucola. It is stuffed with phyto-nutrients which help prevent cancer, strengthen the immune system and have anti-bacterial and anti-viral properties.

Rucola is a good source for folate which is especially important for pregnant women. It provides a lot of vitamin A, B vitamins and vitamin C.  It also contains a lot of vitamin K making it an excellent choice for the elderly. Only 100 grams of rucola deliver 90 % of the recommended daily dose of vitamin K which is crucial for bone formation and healthy brain cells. Vitamin K is used to treat patients with Alzheimer’s disease. This plant also contains many minerals, especially iron, copper and potassium.

Some years ago there were media reports in Europe about big amounts of pesticide residue in rucola and there were warnings not to consume it frequently. My research on the internet did not give me any conclusive information. Anyway, in India it is difficult to estimate how much pollution is in the food we consume. Occasionally there are horror stories in the media. Some time ago I read that practically all Indian honey is contaminated with pesticide and antibiotic residues.

Rucola is not a common vegetable in India yet. I praise myself lucky when I find it in the market. It is more commonly sold in Goan supermarkets which cater to a foreign clientele. In North Goa, some supermarket owners grow their own rucola. Honestly, I don’t think we should worry too much about pesticides in this vegetable. I wash it well and hope the health benefits more than compensate the damages caused by pollution.

About Kornelia Santoro
After riding through India on an Enfield Bullet, Kornelia Santoro settled in Goa with her Italian husband, saying good-bye to her career as a political journalist in Bavaria. Now she writes about her experiences in the kitchen, managing a website, www.mediterraneancooking.in, and a blog, www.korneliaskitchen.blogspot.in. She has published two award-winning cookbooks, Kornelia’s Kitchen – Mediterranean Cooking for India and Kornelia’s Kitchen 2 – Cooking for Allergies. 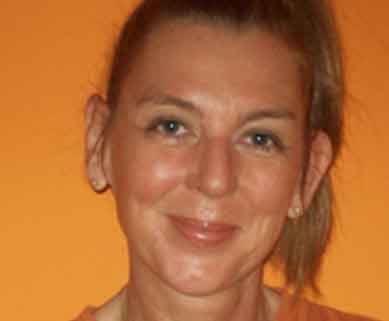