The New Menu at the restaurant is a revelation

The New Menu at the restaurant is a revelation

Situated within an elegant and comforting cocoon in Calangute, Goa, is Modern European fusion restaurant, A Reverie. In the effort to invoke the history, landscape and soul of culinary evolution from around the globe, Aakritee and Virendra Sinh, the team behind the restaurant has conjured a New Menu to celebrate their philosophy of creating ‘Food for Thought’.

The restaurant’s signature cuisine revolves around the continuous pursuit of improvisation of every aspect of food. Taking inspiration from the ordinary, the creators revisit, reinterpret and reinvent the dishes to infuse their own personalities in them – an organic progression of exploration and creativity on the plate, while remaining uncompromising on the flavour and taste. The result of which is the familiar presented in an unfamiliar way, and the unfamiliar presented to look and taste like something familiar.

A great example is A Reverie’s take on beetroots and goat’s cheese, called ‘Nothing Beats Beets Goat Cheese’. Deconstructing the classic combination, this rendition serves beetroot three-ways topped with a fried goat’s cheese patty, establishing the fact that even the most beloved tastes can come alive with imagination and clever technique.
The desi chicken lollypop is also made more interesting with the reinterpreted ‘’Zen’ Garden “Lollypop”’. Compressed chicken wings coated in a Japanese-inspired Teriyaki glaze and served on lollypop sticks on a bonsai tree will raise a sense of child-like glee in the guests’ minds.
The ‘Bath Tub!’ ice-cream sundae pays homage to the cherished banoffee pie to thaw even the staunchest of classicists. A condensed milk and a banana ice-cream with cookie crumbs and chocolate popcorn served in a terracotta ‘bath tub’ is yet another specimen of A Reverie’s gastronomic alchemy.

Reflecting upon the new menu, Aakritee Sinh, Chef and Co-owner says, “Eating at A Reverie is an experience sprinkled with history, aromas, textures, flavours and most importantly, memories. With every dish, we create subtle expressions of surprise with our Edible Art Installations to titillate the palate and the memory rather than confuse the mind. The most crucial elements, however, are fresh ingredients and clean flavours augmented by technique and clever innovation.” 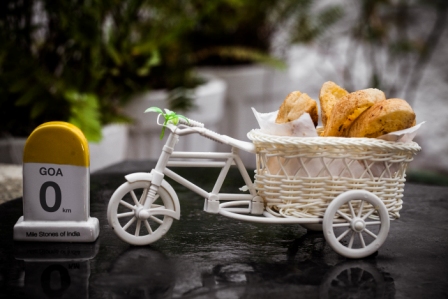 The décor of the restaurant also plays an additional role in heightening the gustatory experience. With large pillars supporting a majestic tiled roof and the raised panoramic lounge forming an ‘inverted amphitheater’ – the restaurant’s façade and intricate details intensify the theatrical culinary performance that is worthy of commendation.

With an element of fun in creating memorable experiences, A Reverie demystifies dining and celebrates the simple art of eating food! 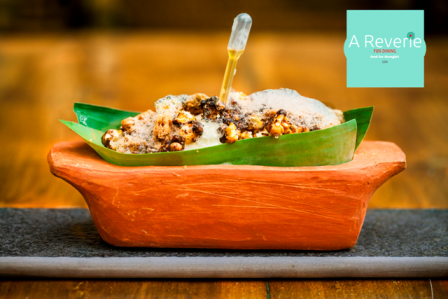