An Explosion Of Conventional Aesthetics

An Explosion Of Conventional Aesthetics

It’s the first of February and I’m attending the second live art performance at the ongoing Sensorium fest at Sunaparanta, Centre for the Arts. A young man clad in flowing robes is moving around chanting and distributing red roses to the seated audience. Soon eggs and chicken will also feature in another art act. Welcome to the brave new world of Live Art.

The experience of witnessing a live art performance immerses us in a new sensorium, cure destroying pretence and traditions, and smashing the old rules. New kinds of engagement are born, activating audiences in public spaces, with or without dialogue. It’s all up to the viewers to figure out their interpretations. This ‘explosion of conventional aesthetics’ may be performed in a gallery, theatre, or even some rather unusual locations.

Heritage Hotels have curated this Sensorium event, featuring artists Bisaji Gadekar from Goa and Sajan Mani from Kerala. The show is followed by Siddharth Shanghvi in conversation with Nikhil Chopra, the well known Goa-based performance artist.

29-year-old Bisaji has been into performance art for the past four years. The audience is always drawn into his interactive performances. He calls his performance ‘What will you take from it?’ Dressed in flowing garments simulating a house, he chants ‘hi, hai, hai,’ in varying octaves, and hands out roses to the audience, a ritual generally associated with love. “The visuals might give you the perception of love; it might not be real,” seems to be the message.

The performance moves to a house made with cloth, suspended a foot above the ground by strings at its four corners. He sheds his garment and runs out of the courtyard, returning with bunches of red, pink and violet gas balloons, which he ties to the four corners. The chanting ‘hai, hai’ continues. He bandages his face and head, leaving a slit at the eyes. Then he crawls under the house, lights a candle, and cuts the strings that anchor the house, which sways with the balloons above it. He severs the tethering cords of the balloons which float into the air, and the house collapses.

Sajan’s performance is titled ‘Secular Meat’, and takes place alongside Bisaji’s act. It questions the relationship of food with the body and its identity. He is clad in just a loin cloth, his body and hair painted with a greenish blue fruity colour. A pile of eggs are arranged in a circle, with two chickens cut in half placed around the eggs, dipped in the green. Three eggs at the top are white in colour. He lies immobile through Bisaji’s performance, and when he moves, someone in the audience gasps, “I thought it was a statue!”

He gazes at the eggs and chicken, rubs a white egg against his neck and face, climbs into a small tin tub and pours water over his body. Then he climbs out, takes a white egg again and rubs it on his forearm. He seems to be wondering if his skin has whitened. It hasn’t. He continues washing until all the paint washes out.

“My life is a performance, so I can’t say when I started Performing Art. It’s like a learning process. My main concern is on the black ‘dalit’ body, based on movement to different public spaces. I perform at galleries, but the public relationship is my main intent,” says 32 year old Sajan who has completed a residency with Nikhil Chopra, and has performed at Vancouver, Dhaka and the UK. 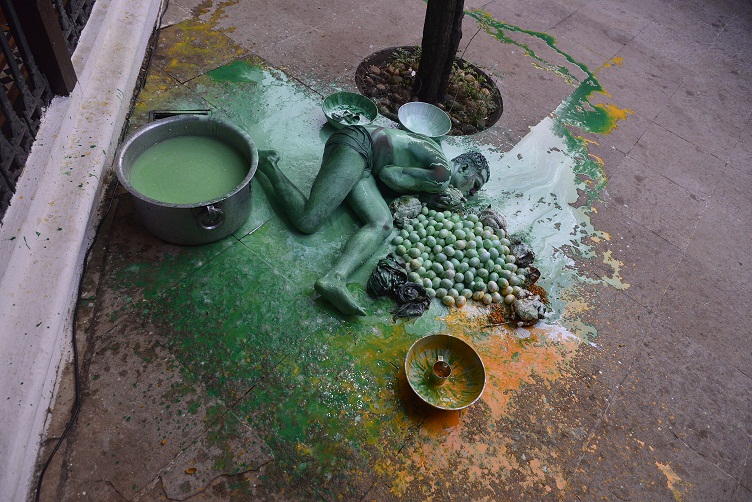 Nikhil Chopra is introduced by Siddharth as ‘a maestro’ in Live Performance. After an art residency in 2011-12 in Berlin, he came back with potent experiences of interaction with people, playing with space and time. He came to Goa a few years ago, and was inspired enough to rent a hotel in North Goa. It is easier to get people to come to Goa, and create a platform for artists from all disciplines, he says. Sunaparanta has given him the space to expand and bring Performance Art to the public.

Assisted by Roman, a Frenchman, and Madhuri, an art critic from Mumbai, Heritage Hotels is on the front line of artistic inquiry into our culture, artists and audience. They have weekly events over wine and beer, and Nikhil finds a lot of young artists from Goa are looking at what he does.

His work draws on personal and collective cultural history, examines the questions of identity and the role of autobiography. He looks at the politics of posing and self-portraiture, and his performances are a form of storytelling, of a personal narrative of everyday life.

The challenge for an audience at such a show is to sustain through the long duration, slow gestures and unfolding narratives. Some guests left mid performance, shaking their heads. Those familiar with live art applauded, while some could not relate to it at all. When conventional aesthetics explode you are bound to see some baffled victims! 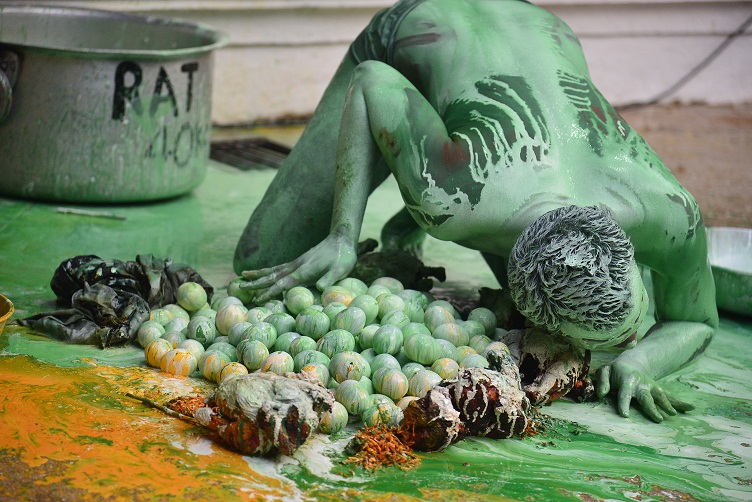