A young German woman travels to her Goan husband’s homeland and is fascinated by the vibrant Catholicism in Goa. She roams the state with her Rolliflex film camera in 2011, capturing vignettes of how people celebrate their faith in various moments and spaces of their lives. After further study of the history of the land and its rituals, a book… END_OF_DOCUMENT_TOKEN_TO_BE_REPLACED

A young German woman travels to her Goan husband’s homeland and is fascinated by the vibrant Catholicism in Goa. She roams the state with her Rolliflex film camera in 2011, capturing vignettes of how people celebrate their faith in various moments and spaces of their lives. After further study of the history of the land and its rituals, a book is born. Christina Schulthoff-Fernandes’ book Passion in Paradise was published by Goa 1556 in 2012. This little square shaped book of 75 pages contains photographs of crosses and chapels by the roadside, religious calendars adorning home walls, zagor dancers, imagery of Hindu-Catholic syncretism and many more pictures,
along with explanatory text. Streets Editor José Lourenço caught up with Christina during her holiday in Goa.

Did you grow up in a religious background?

I didn’t grow up in a very religious environment. My father is a lapsed Catholic and my mother is a lapsed Lutheran. In Germany the north is dominantly Lutheran and the South is Catholic. In Germany you have to pay Church Tax, if you are practicing the faith. My father exited the church as he had some bad experiences and turned hostile to organized religion.

How did you get started off on this book?

I got interested in Catholic culture in Goa after I met Glen, my husband. In Goa people live with their faith?they say grace before meals, they have altars in their homes, they have so many rituals.

In the West, churches are increasingly becoming empty. Do you think Goa will eventually follow this trend?

I don’t think that is imminent. Just because the West went that way doesn’t mean Goa or the rest of India will go that way. In India people are quite religious; their religion is tied up with their lives. The feasts, the fairs…religion is much more social, more fun here. In Germany you would just go for Mass and that’s it. The families there are also smaller, their events are more private. 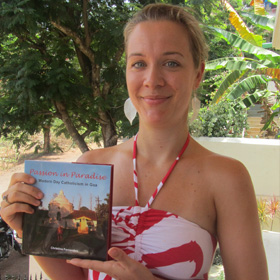 Do you think it is because of the evolution of societies? Because political and philosophical attitudes are different in Europe and India?

Is there some reason why some people can believe blindly and others cannot?

My husband grew up religious, not so much in the technicalities of rituals, but in the bigger picture. I did not grow up religious, I have difficulty believing in all these beliefs. I don’t know, I too wonder why some people believe and others don’t. I am not a complete atheist, there are a lot of things that we don’t understand at the edge of our knowledge.

I see you photographed a picture of a religious sticker on a scooter in Goa. Do you see this in Germany? Are children named after saints or religious figures in Germany?

Never. Maybe in Italy, they are very Catholic, or in Greece, among the Orthodox, but nowhere else in Europe. In Germany not many people are named after saints. If at all they name the child after a saint it is because of a fashion to use old names. There’s no connection with religion.

Did you feel awkward photographing people and places for your book in Goa?

People didn’t ask any questions. They were okay with my camera in their faces, very relaxed about having their picture taken, even during Mass or when ceremonies are going on. My husband’s relatives were very cooperative, every time there was a feast they would say, come, we’ll take you there. I went to the Zagor at Cacra and Nauxem.

Litanies are often sung in Latin in Goa. Did you study Latin in Germany?

No I don’t understand Latin. After the Second World War, Germany was sectioned into 4 parts – under British, French, American and Russian influence. So many people who grew up in Russian controlled Germany before the Reunification don’t speak English, they speak Russian. I grew up in French controlled Germany, I studied German, English and French, and just for a year I studied Russian as a third foreign language. If you wanted to study medicine you would have to study Latin as a second foreign language. 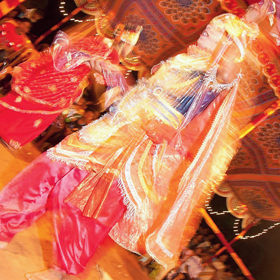 You have Masters degrees in Journalism and Photojournalism from the US and UK. How have these studies helped you?

The US degrees were very hand-on. The North Western University had newsrooms in Chicago and Washington. So you were a journo, you got credentials just like anyone else. The studies in the UK were more theoretical, not so useful in the real world. But my time in the UK did improve me as a photographer.

What new projects are you working on?

I am writing a novel set in Cambodia. I also want to write a book about traditional music in Goa. There are many elderly musicians playing in duos and trios, with violins and wind instruments. How long are they going to be around? Are the youngsters who are learning music going to keep music as a part of their lives the way the older generations did?