Presented by TBZ,hospital the Original Since 1864   Diamonds are timeless, as the saying goes. But through the ages, they have also been the subject of legends and in some cases, scary curses. Writer Perin Ilavia tracked down some world famous diamonds of Indian origin which are known as much for their beauty as their curses. The… END_OF_DOCUMENT_TOKEN_TO_BE_REPLACED

Presented by TBZ,hospital the Original Since 1864

Diamonds are timeless, as the saying goes. But through the ages, they have also been the subject of legends and in some cases, scary curses. Writer Perin Ilavia tracked down some world famous diamonds of Indian origin which are known as much for their beauty as their curses.

The Koh-i-Noor is undoubtedly one of the most famous (and largest) diamonds in the world, and the curse associated with it datesback to an ancient Hindu text that said ‘He who owns this diamond will own the world, but will also know all its misfortunes. Only God, or a woman, can wear it with impunity.’ Legend has it that this diamond was stolen from Lord Krishna. Originally namedSyamantaka Mani (Prince among Diamonds), the Kohi-
Noor was owned, in turns, by the Rajas of Malwa, the Khilji & Lodhi dynasties (all of whom witnessed short-lived
reigns), the Kakatiya Empire (of present-day Andhra Pradesh) from whom Muhammed bun Tughlaq captured the stone and took it to Delhi. From 1526, it was passed on from one Emperor to another, their reigns often marked with rebellion, with sons overtaking fathers.

Shah Jahan ruled from 1639 and placed the Koh-i-Noor in his ornate Peacock throne. Thereafter began the struggle for the Mughal Empire between his sons, fratricide being the most common form of death. In 1739, King Nadir Shah of Persia (present-day Iran) invaded the Mughal Empire and took the diamond to Persia, renaming it the Koh-i- Noor, meaning Mountain of Light. The curse of the Koh-i-Noor struck again. He was assassinated while his successors literally blinded each other to capture the throne. After that, Maharaja Ranjit Singh took possession of it in1800. He died six years later.

During the British rule in India Lord Dalhousie arranged with Ranjit Singh’s son Duldeep, to gift the famed diamond to Queen Victoria in 1851. In1852, Prince Albert had it re-cut from its 186 carats to 105 carats (which increased its brilliance), mounting it in the centre of a tiara with more than two thousand other diamonds. The British were probably aware of the ‘curse’ mentioned in the Hindu text, and from Queen Victoria onward, it has been worn only by women of the Royal family. Yes, today it is still set in the Crown of Queen Elizabeth, and it is on display at the Tower of London. 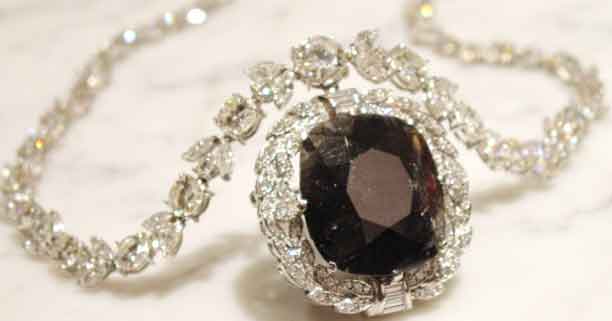 Also known as ‘the Eye of Brahma’, the historic Black Orlov is said to hold a deadly curse. This precious gem originated in the early 19th century and featured as one of the eyes of a statue of Lord Brahma in Pondicherry. The 195-carat stone was first believed to have been stolen by a monk. It is theft that is believed to have caused the curse, causing three of its owners to jump to their deaths. In 1932, JW Paris is said to have taken the diamond with him to the United States. The diamond dealer soon committed suicide by jumping off a skyscraper in New York. Other owners included two Russian princesses – Leonila Galitsine-Bariatinsky and Nadia Vygin-Orlov (after whom the diamond is named) – both of whom too jumped to their deaths in the 1940s. After that, Charles F Winson, a New York-based diamond dealer bought the stone and cut it into three pieces in an attempt to break the curse. The 67.5-carat Black Orlov was set in a brooch of 108 diamonds, suspended from a necklace of 124 diamonds. It was later purchased by another diamond dealer named Dennis Petimezas in 2004. Its newest owner says he is “pretty confident that the curse is broken.”

The Hope Diamond
Perhaps no other diamond in the world is as famous, maybe infamous, as the Hope Diamond. It is said this precious stone was dug out of the Kollur Mine in Golconda (Andhra Pradesh) and weighed more than a staggering 112 carats at one point. After being stolen from the eye socket of a statue of Goddess Sita, it is said that a curse befell this deep-blue diamond and it foretold bad luck and death not only for its owners, but for all
who touched it.

The first famous owner of the Hope Diamond was Louis XIV, the King of France, who bought it (in its cut form at 67 1/8 carats) from French gem-merchant Jean Baptiste Tavernier and used it in the French Crown Jewels. Legend has it that after Tavernier sold the diamond, he was torn apart by a pack of wild dogs while on a trip to Russia. This was the first horrible death attributed to the curse.

Its second owner, Louis XV, reset the Hope in another jewellery piece, the Emblem of the Golden Fleece. After his death, his grandson Louis XVI became King of France. During the French Revolution of 1789, both Louis XVI and his queen were guillotined, with Marie Antoinette allegedly wearing the diamond around her neck when she was beheaded. Shortly after the French Revolution, the Hope Diamond was stolen along with several other crown jewels. It mysteriously resurfaced in London 22 years later. By 1823, English jeweller Daniel Eliason was the owner of the ‘Blue Diamond of the Crown’. The Hope was once again in royal possession when England’s King George IV purchased it from Daniel Eliason. It was subsequently sold off to pay off debts.

Soon after, Henry Phillip Hope (from whom the diamond now takes its name) took possession of the diamond. During the Hope family’s ownership, the diamond’s reputation for bad luck intensified. The Hopes went bankrupt and after numerous attempts they finally managed to sell the diamond in 1901, which was purchased by New York diamond merchant Simon Frankel. (It later wound up with Frenchman Pierre Cartier.)

After that, several bizarre events occurred involving the Hope and its different owners. First, Jacques Colot, a French broker, became insane and committed suicide after buying the stone. A Russian prince, Ivan Kanitowsky, supposedly loaned or gave the diamond to an actress who was shot dead the first time she wore it. The prince himself was later stabbed to death by revolutionaries. A Greek jeweller who sold the diamond to the Sultan of Turkey was thrown off a cliff while driving in a car with his wife and child.

Evalyn Walsh Mclean, an American who had amassed a fortune in gold mining, bought the diamond from Pierre Cartier. Although she refused to believe in its ‘curse’, tragedies struck her family soon. Her younger brother died, a nine-year-old son was run over by a car, her ex-husband (an alcoholic) died in a mental institution, and her only daughter died of a drug overdose at the age of 25. McLean never recovered from her tragedies and passed away a year later. After her death, her extensive jewellery collection was purchased by Harry Winston from New York who donated the Hope to the Smithsonian Institution in 1958, where it remains one of its premier attractions. 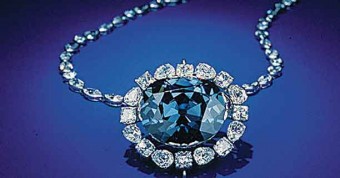