Hallowed Rhythms Echo Through The Ruins of Old Goa

The recently concluded first Ketevan World Sacred Music Festival held in Old Goa was a brilliant amalgamation of Western and Eastern music. It brought together western symphony orchestras, Indian classical musicians and European soloists all on one stage. Besides the concerts inside the Santa Monica Church and the magnificent St Augustine Ruins, the festival hosted symposiums and master classes which had the audience asking for more.

The first part of the festival took place on 12th to 14th February, a spectacular Valentine’s Day gift for the music loving people of Goa. It opened with the Spanish ensemble Capella Della Luce performing at the Santa Monica Church. An amazing Saturday evening followed, at the ruins of St Augustine’s Tower, which is actually the remnant of the Our Lady of Grace Church, attached to the St Augustine Convent, now all in ruins. The Goa University Choir and an ensemble of Spanish master musicians enacted an oratorio on the life of Queen Ketevan, the queen herself being played by Joanna de Souza. The oratorio covered the martyred queen’s saga from Georgia to Iran and finally to Old Goa. The second concert of that evening saw Sephardic and Jewish Music performed by soprano Rocio de Frutos and a group of Mediterranean artists – Daniel Parejo, David Ruiz, Ignacio Monteverde and Pablo Trave. This was followed by a concert by Pandit Debashish Bhattacharya on his slide guitar.

At one of the many symposiums, Fr Peter Cardoso, director of the music academy at Pilar Seminary said that Indian Classical Music and Gregorian music had many similarities, as they were both based on religious texts. He demonstrated this with several recitals in both Indian Classical and Gregorian music. He sang Indian raagas like Raag Yaman Kalyan, Darbari Kanada and the Bhairavi immediately followed by the equivalent Gregorian chants much to the delight of the audience.

Italian musician-scholar, Paolo Pacciolla shared his research on the mridanga, an ancient Indian percussion instrument which is believed to have originated in the year 2 BC and is a forerunner of the modern-day pakhawaj. Citing from his interviews with pakhawaj masters like Swami Ram Kishor Das and Dalchand Sharma, Pacciolla explained how the training on the pakhawaj strictly followed the tradition of the ‘Guru-Shishya parampara’, where the master imparted training to his disciple on his own terms. He also showed images of Hindu deities like Vishnu, Ganesh, Hanuman and Shiva playing the pakhawaj. Spanish musician-academic Daniel Martinez, who plays the oud (an Arabic instrument), spoke on Jewish music and played several Jewish compositions from across the world.

Pacciolla was all praise for the festival, saying, “The Ketevan music festival is unique because it has brought the best of eastern and western music under one roof.” Dancer Luisa Spagna, who is an Odissi exponent said,” Both Paolo and I have been coming to India continuously for over 20 years and absolutely love the country, its traditions and its people. It is a very special country.”

At an earlier press meet, popular Indian flautist Rakesh Chaurasia said that musicians should consider themselves fortunate and blessed as they could team up with fellow musicians from across the world and make music without understanding each other’s language or customs.

“The Ketevan Music festival is unique, as the organisers have managed to bring together musicians from such diverse backgrounds,” said Chaurasia. “I have seldom come across music festivals which are so diverse and yet similar in nature.”

February 19-21 was the concluding weekend of the Ketevan Music Festival. The weekend began with performances by Pacciolla and Spagna, followed by a solo performance by Vienna based pianist, Marialena Fernandes inside the St Monica Church. Saturday evening witnessed the Ketevan vocal ensemble and the Seville chamber choir of Spain display their skills under the stewardship of music conductor Santiago Lusardi inside the St Anthony’s Chapel, opposite the St Augustine’s Ruins. The action then shifted to the Ruins, with an East-West fusion performance by sitar maestro Ustad Chote Rahimat Khan and guitarist Ignacio Monteverde, followed by flautist Rakesh Chaurasia.

The last evening opened with the Goa University choir and the Bombay Symphony orchestra performing under Santiago Lusardi’s baton, inside the Santa Monica Church.

The young and talented Mumbai based pianist Utsav Lal presented Indian ragas on the piano in the last session of this lovely festival at the St Augustine Ruins.

While a group of musicians went to the Lourdes Convent and St Xavier’s Vidyalaya in Saligao and Korgao respectively, another set of musicians visited the ASHA Mahal destitute home in Taleigao, and the Santa Cruz school in Santa Cruz. 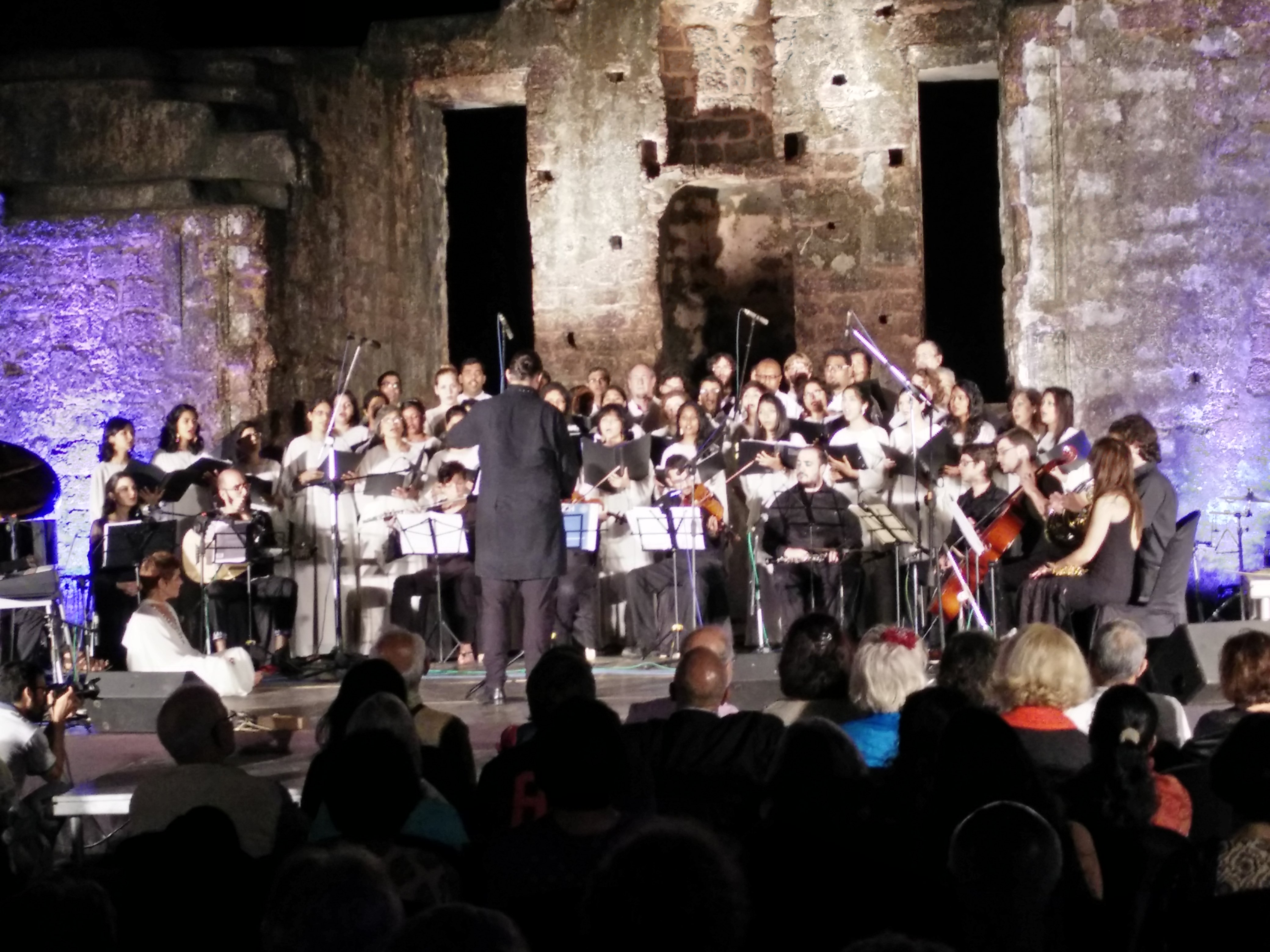 Acclaimed Spanish violinist Leo Rossi along with viola player Pablo Trave, violin cello player Jose Luis Tarin and Mumbai based violinist Dielle Braganza regaled the inmates of the ASHA Mahal and later had the children of the Santa Cruz school in the thrall of their music.

Rossi and his colleagues played Mozart’s ‘Divertimento in D’ at ASHA Mahal. The four pieces performed by the musicians so captured the imagination of the women there that they were moved to tears. Michelle, one of the inmates, said in a choked voice, “I have never heard such heavenly music before. God bless these lovely people for coming to our home today.” Soccorinha Fernandes, the manager at ASHA Mahal, said, “These musicians play at international concerts. That they came to our destitute home to share their joy exhibits their humaneness.”

At the Santa Cruz school, the musicians were greeted by a church full of 200 children ranging from Class One to Ten. The musicians played Mozart once again to thunderous applause. School teacher Bernadette Diniz was clearly overwhelmed by the performances. She said, “We are indeed lucky to have these accomplished musicians visiting us to perform here. This is such a big inspiration for our little children.” Visiting American choir teacher Nicky Manlove, who teaches the school children picked out Leo Rossi’s Bach solo as his personal favourite. “Rossi is indeed a fantastic musician,” Nicky said.

From the spiritual emotion of a martyred queen to the meeting of eastern and western music to the affectionate performances for Goan school children and underprivileged women, these world class musicians showed the world once again that music is truly a compassionate and powerful unifying force on this planet. Here’s wishing the Ketevan World Sacred Music Festival many more spectacular encores in Goa in the years to come!