Yes I know. Money can’t buy happiness. Materialism is empty. What counts is what you do, unhealthy not what you have.  You can’t take possessions to your grave. Blah blah blah. Etcetera etcetera etcetera.

Enough! Like ice cream and sex and fillet mignon and various forms of harmless sinning, pill there’s a place in this world for that gorgeous little rock called a diamond. Go ahead. Cut loose. It’s OK to love it!

For many of us, our first experience with this queen of gems starts with an engagement ring.  Many decades ago, especially in Indian culture, buying a diamond engagement ring was not statutory, as it is today. Some buy one just because it’s the ‘done thing’, or perhaps because she wants it. Others say it’s about the symbolism, a promise of ultimate love, a mark of commitment and devotion.

The setting for the engagement ring is a solitaire. If she’s traditional, she might like the classic round diamond on a simple band. If she’s feisty, she’ll perhaps prefer a wide gold or platinum band with a huge rock.

Buying  diamond jewellery is a big investment, so it’s important to be as educated and well prepared as possible when you begin shopping.

Keeping the five reliable criteria for diamonds in mind will help steer you in the right direction in finding the perfect diamond for your perfect mate. And, be sure to buy diamonds from a certified retailer who guarantees the specification of the stone, or you’ll end up buying ¼ carat sparkler which is a dud. You don’t have to rob a bank to bag decent diamonds. Now, that’s a revelation with a good ring to it.

The word ‘diamond’ comes from the Greek ‘adamas’, meaning imperishable. It comes from the oldest natural material on earth and is made from a single element. It is also our planet’s hardest stone, surpassing heat conductivity of other precious stones. Only a diamond can cut a diamond. 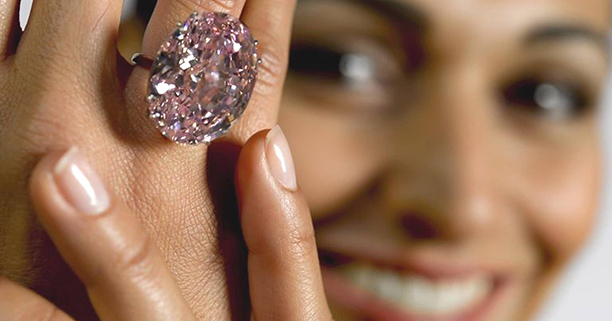 Diamonds were first discovered in India, followed by Brazil. They used to be worn only by royalty and noblemen. Their main component is highly stable allotropes of carbon. They are found deep under the ground, along shorelines of rivers where the carbon eroded from rocks known as kiberlite and lamproite, accumulating due to wind and water. They’re also found in meteorite impact craters, dated to about 3 billion years ago. The carbonado diamonds from Latin America and Africa are believed to have been deposited via asteroid impacts.

Frances Gerety, a copywriter working for Philadelphia-based advertising agency, coined the phrase ‘Diamonds are forever’. That was in 1943. They still are ‘forever’, cherished as an eternal gift of love.

The test of a pure diamond are the five C’s.  The most expensive stones are colourless. Although diamonds look colourless to the clueless eye (which, let’s face it, covers most of us), they normally contain tints of yellow and brown. Diamonds are graded from D (colourless) to Z (tinted). Engagement rings tend to be around the E-J mark.

The quality of your diamond depends on its clarity, how many natural flaws are prominent. The more flaws, the less expensive the diamond.

Although the shape has four sides, in reality the best stones feature a full 58 sides, which reflect the light and give the diamond its sparkle. ‘Carats,’ (not to be confused with karats- the unit for measuring the purity of gold, or carrots, the vegetable) refer to the weight of the jewel. One carat weighs 0.2 grams, which is divided into 100 points, so a 50-point diamond weighs ½ a carat, and, two diamonds can be of equal carat weight, but differ in value according to their cut, colour, and clarity. 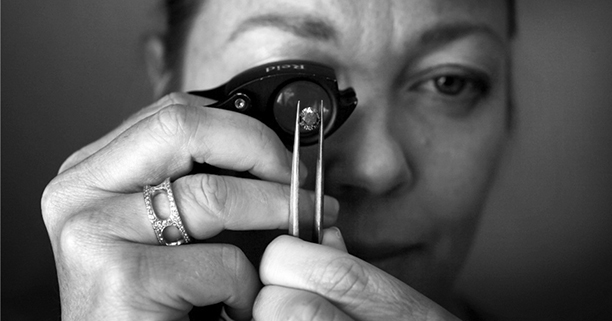 The cut is the largest facet of a diamond which comprises the flat surface on the top of the stone, resembling a ‘table’. There are other components of a diamond, including the crown, the girdle, the pavilion and the culet (the smallest facet of a diamond located at the very bottom of the stone). There are emerald cuts, princess cuts and diamond baguettes. You can choose among channel, prong or pave settings. As you can see, selecting the perfect diamond can be overwhelming, and is very much a matter of personal taste. The decision should be in sync with the personality of the wearer.

In reality almost no gem-sized natural diamonds are absolutely perfect. Colored diamonds,  known as “fancy diamonds”, may be affected by chemical impurities and/or structural defects in the crystal lattice. Depending on the hue and intensity of a diamond’s coloration, a diamond’s color can either detract from or enhance its value.

Diamonds occur in a variety of colors, including steel gray, brown, white, blue, yellow, orange, red, green, pink and purple.  Out of all coloured diamonds, red diamonds are the rarest. ‘Brown’ is considered a killer as far as diamond value goes. Most white diamonds are discounted in price when more yellow hue is detectable, while intense pink or blue diamonds (such as the Hope Diamond) are enormously valuable.

It seems the phrase ‘diamonds are a girl’s best friend’ is more than just a cliché.