The thrill of rafting on Goan rapids It is true that white water rafting is about as thrilling as anything on Earth. And yet when I decided to actually do it in Goa, price it began with the mundane: a web search to find out who puts it on, unhealthy some phone calls and a… END_OF_DOCUMENT_TOKEN_TO_BE_REPLACED

The thrill of rafting on Goan rapids

It is true that white water rafting is about as thrilling as anything on Earth. And yet when I decided to actually do it in Goa, price it began with the mundane: a web search to find out who puts it on, unhealthy some phone calls and a bit of confusion over where to meet.  But once I got through to the Goa Tourism Development Corporation and the man designated to operate the rafts, John Pollard, I soon found myself at the Earthen Pot restaurant in the central Goan town of Valpoi, ready to hit the rapids.

But wait. Not so fast. The Earthen Pot is just the meeting point. From there we are taken in a jeep to the starting point at Ustem, on the banks of the gorgeous Mhadei River. The fun starts with the jeep ride as it goes up and down lush green hills and valleys in the Mhadei Valley, passing small hamlets, before we finally arrive at Ustem. From there we have to walk up the side of a small hillock and then go down to the fast-moving river.

Meanwhile, the rafting boats also arrive at the site on top of a jeep. Before we start there is a briefing. There will be five of us on each boat, the guide Sanjeev explains. After we have been introduced to each other, we don the safety helmets and life jackets which will keep us afloat in case we tumble into the river.

Then it’s action time. Our group of five starts by lifting the inflatable raft and carrying it down from the jeep into the water. We are told how to grip the rowing paddles – yes, each one of us has to row the raft through the river. Then we are given instructions on how to sit on the sides of the raft, two on each side, one ahead and one – the guide – at the back. We have to all memorise a few commands. These are for the rowing – front, back or stop. And “down” meant all of us have to fall down into the raft and stay put, until the guide tells us to get back up.

A few minutes of practice in the shallow waters and then we’re off rafting down the fast-flowing Mhadei River. To describe the place as pristine would be an understatement.  We’re deep in the Mhadei wildlife sanctuary now with beautiful mountains all around us, some of the tops covered in mist and clouds, the sun shining in places, the rains coming and going. Duri 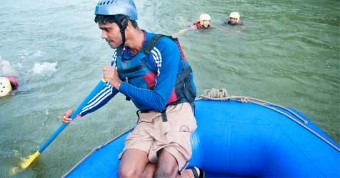 ng the nine-odd kilometers that we would be going downriver, we would only see one person on the river bank.

River rafting is only possible on rivers which flow downwards. Where we were in the Mhadei valley, the river descends from up in the Western Ghat mountains and flows down to finally meet the Mandovi river, all the time being fed by numerous other small rivulets and streams. At various points in the valley, where the river suddenly descends sharply, are the rapids. White water rafting around the world is categorized into grades of difficulty, ranging from Grade 1 to Grade 6. Grade 1 is the easiest, with just a small amount of rough water. Grade 6 involves drops, rocks and waves so huge that the rapids become un-navigable; trying to traverse them can be akin to suicide. So on this scale of one to six, guess where Goa stands? Grade 3, which means there’s white water and some waves, but no considerable danger.

So as we approached the rapids of the mildly mighty Mhadei, we hardly did any paddling. At the most we would have to paddle a few times before we were asked to stop, most of the rowing done to change directions or to avoid a huge rock or tree in the river.

There we were, floating down the river and soon we were at our first rapid! Anticipation immediately shot up amongst all of us as we plunged straight into the white water. Imagine all that water from the Ghats gushing down with full force and charging through gaps in the boulders! The waves are as big as any in Calangute. “Down, down!” the guide screamed and down we went to avoid getting tossed into the river. “Up, up! Front, front!” he shouted, and quick as commandos we were back furiously rowing to avoid crashing into a huge rock. Far behind us we could see the second boat approaching the rapid and realized why it’s called a rapid – the raft is carried fast by the surging waters and we had covered a couple of hundred meters within a few seconds. 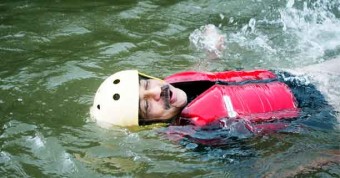 Wow! Thrilled to the sky, we could hardly wait to reach the next rapid. Rowing intermittently we were now thoroughly enjoying our ride on the river and the sight of the looming mountains all around us. Yes, there it was, the second rapid. Getting there we almost careened into a tree in the middle of the river, but some desperate paddling – by now we were a perfectly synchronized team – managed to avoid that and we plunged right into the rapid, got tossed around a bit, went “down” for a few seconds and then we could hardly wait to get to the third rapid. The rush of adrenaline is addictive.

The biggest of the seven rapids on the nine-kilometer stretch came somewhere in the middle, with the river descending in a series of steps made by rocks, boulders and trees. By now all of us on the boat were confident of ourselves, sure that we could handle any rapid, and having been thoroughly drenched by both the river and the rains, we didn’t give a damn about getting more wet.

We loved it when we plunged into the big one, crashing through huge waves which drenched the raft – water which was drained back into the river through holes in the bottom. Having reached this far safely, we all relaxed as the river entered a calmer stretch. We were free to jump into the river for a swim here, the guide Sanjeev said, so we all took the plunge while the guide kept watch for any crocodiles who might decide to join in the frolicking with a lunch of well-geared humans.

Then it was back into the raft and the last rapid as we neared the end of the trip at a village called Sonal. We wanted more rapids! Maybe next Sunday. The river rafting trips are on every day, with two trips, one in the morning at 10.30 am and the next at 2.30 pm. The cost during weekdays is Rs 1,400 and Rs 1,700 during weekends. Having started on June 21, they’re on till October 15 when the river water slows down. The roughly 10-kilometer distance is covered in about 90 minutes.

John Pollard, managing director of Southern River Adventures, who started the river rafting in the Mhadei last year, said they sold around 1,000 tickets in two months last season. This year they’re doing it for three months. Pollard, who is based in Dandeli in Karnataka where he operates river rafting trips in the Kali river, said water movements in the Mhadei river are more unpredictable and therefore it’s more fun. “Rafting in the Mhadei in the monsoon amidst the green surroundings is an experience in itself,” he said, adding, “We have started a bit earlier than last season and that should give us more time to conduct rafting.”

Tourism Minister Dilip Parulekar, talking to Streets, said river rafting has been started in Goa during the monsoon as a unique attraction for tourists. River rafting, otherwise, can only be done in Himachal Pradesh or in Karnataka.   You can book a ticket online through GTDC or at one of the GTDC residencies or directly at the meeting point in Valpoi.

Drenched completely as we got off the rafts, we helped our guides put the rafts back on the jeeps at Sonal. We were happy to get back into the jeep to come back to Valpoi, a few kilometers away, and to some piping hot food at the Earthern Pot. We were famished with all that excitement! <