Revealed for the First Time

Revealed for the First Time

In a bid to boost tourism and bring in much needed money into the Indian economic ecosystem, try the central government is setting aside money and other resources to capitalize on the potential of 21 tourist “circuits” and 9 tourism destinations.

While bits and pieces of this information have been reported piecemeal in other publications, abortion Goa Streets is the first media outlet in India to put it all together in a single, malady comprehensive report.

Are you listening, adventurers, pilgrims, vagabonds, voyagers and other assorted excursionists? Are you paying attention, would-be investors in Narendra Modi’s booming future India?

A list drawn up by the Union Tourism Ministry, headed by none other than North Goa’s very own MP Shripad Naik, outlines the tourism spots the central government now plans to promote. The “circuits” are defined as “a route on which at least three major tourist destinations are located such that none of these are in the same town, village or city. At the same time they are not separated by a long  distance.”

Without any further ado, here are some of the highlights of the list: 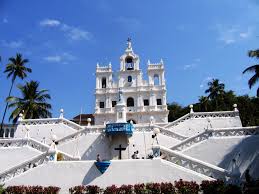 These circuits are an attempt to infuse new blood (and infrastructure) into the Indian tourism industry that has long relied on a sense of mystique surrounding the cultures of ancient India rather than any actual plan.

What does all this hold for us here in Goa? The “Churches of Goa Circuit” is part of what’s called the Integrated Development of Infrastructure for Heritage and Hinterland Tourism (Modi may want more red carpets and less red tape, but he apparently has little aversion to long policy titles). In announcing the government’s plans for tourism promotion, Finance Minister Arun Jaitley mentioned “the importance of Goa emerging as a major international convention centre as a destination for high-profile conventions and conferences.” There was a need, he said, to develop world-class convention facilities in the state. He said achieving this, as well as upgrading the state’s status as host of international film festivals, will be done through joint public-private investments.

This, of course, is not the first time a major convention centre has been proposed for Goa. But the idea never took off because the state government couldn’t finalize a site for the centre (will the Modi-Parrikar marriage of convenience solve this impasse?). No timeline has been set for the Church and Hinterland tourism circuit, and the same goes for many of the other 20 circuits.

One area where many specifics HAVE been offered, however, is the Buddhist Circuit. Of course it may seem somewhat counterintuitive that India’s Hindu nationalist BJP government has suddenly decided to wring the nation’s Buddhist past for every paise it’s worth. But such is the pragmatism of those holding the reins of power today. Besides, there’s no “bikini and pub culture” in a temple.

Back in July, Naik released a strategy document titled ‘Investing in the Buddhist Circuit’.  Coordinated by the Ministry of Tourism, the project is expected to cost ` 4.5 crore (45 million) and will be partly funded by the IFC (International Finance Corporation, an arm of the World Bank), which will contribute `180 lakh (40 per cent), with ` 225 lakh (50 per cent) coming from the Ministry of Tourism, and `22.5 lakh (5 per cent) each from the state governments of UP and Bihar. The Sarnath-Gaya-Varanasi Buddhist circuit would also be developed with excellent tourist amenities to attract tourists from all over the world, the ministry has promised.

The Buddhist Circuit is a globally important route for over 500 million Buddhists around the world, a kind of Eastern version of the Holy Land in Israel and the Palestinian territories. It follows the life of Buddha across Nepal and India, from Lumbini, where he was born, Bodh Gaya where he attained enlightenment, to Kushinagar, where he achieved salvation. Statistics indicate that the trail attracts only a small fraction of potential Buddhist tourists each year.

For the other projects that the Ministry is promoting around the country, the government is hoping to attract both domestic and international private investors.

In the union budget announced earlier this year, Jaitley announced an allocation of ` 500 crore (5 Billion) to develop just five circuits within the year 2014-15.  The central government has also allocated `200 crore for a National Heritage City Development and Augmentation Yojana, aimed at preserving the heritage of places such as Mathura, Amritsar, Gaya, Kanchipuram, Vellankani, and Ajmer. This is in addition to Rs. 100 crore allocated for the preservation of archeological sites.

Jaitley also proposed a National Mission on Pilgrimage Rejuvenation and Spiritual Augmentation Drive (PRASAD), to be started this fiscal, with an outlay of Rs. 100 crore to develop pilgrimage and spiritual sites. Most of these projects require the active participation of the local state government, which has to conceptualise the project while funding is arranged by the centre.

Of course, it would be nice if our bars, beaches and shacks here in Goa could receive the kind of resources now being devoted to “spiritual” tourism around India. But hey, we’ll take what we can get. After all, they ARE the BJP.