A solemn line of men, women and children winds its way up a hill, some carrying small wooden crosses. There is a mournful silence in the air, broken only by the intermittent sound of prayer. The passos is underway. Known for its deep attachment to Church rituals, it is no surprise that in Goa the… END_OF_DOCUMENT_TOKEN_TO_BE_REPLACED

A solemn line of men, women and children winds its way up a hill, some carrying small wooden crosses. There is a mournful silence in the air, broken only by the intermittent sound of prayer. The passos is underway.

Known for its deep attachment to Church rituals, it is no surprise that in Goa the practice of the Way of the Cross along with the lenten passos are enacted with religious rigour.

Panjim and Margao have streets leading up a hill where paths are lined with 14 crosses. On Good Friday, each of these 14 get transformed into special stations where scores of locals re-enact the ‘Passion of Christ’ in a Way of the Cross procession―the journey Christians believe Jesus took with the wooden cross up the Calvary hill after he was condemned to death. 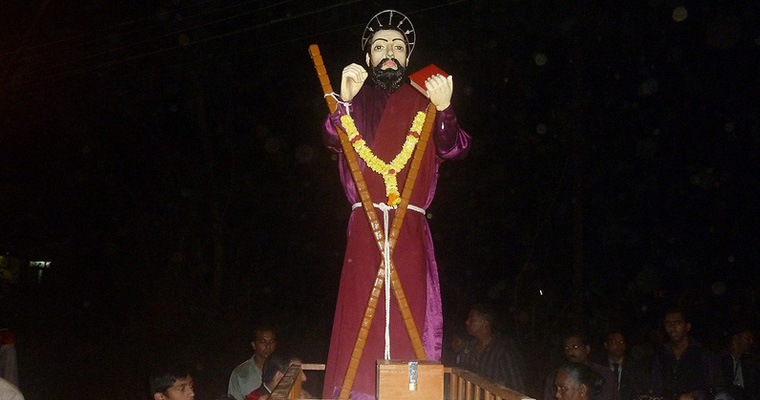 The journey of Christ on his way to crucifixion is thus re-enacted on the road leading up to the Altinho hill in Panjim and the Monte hill in Margao.

These are not the only towns where the Catholic faithful demonstrate their ritualistic fervour. There are scores of smaller towns and villages in almost all parishes where scenes depicting Jesus’ last torturous walk are enacted.

Take the case of Anjuna, better known for its all-night raves, drugs and sex tales. Here, on the fifth Sunday of Lent, the hills and cliffs are frequented not by party weary young men and women, but by repentant Catholics who take the long, tiresome walk up steep slopes.

The fourteen Stations of the Cross are carved on small pillars along the route and the procession pauses to reflect and pray at each of these. The entire Stations of the Cross ritual at Anjuna then culminates with a Eucharistic celebration (mass) held at the ‘Miraculous Cross’ up on the hill.

The ritual is prevalent in many other villages of Goa, both along the coast and in the hinterland. But no description of how Lent is observed by the Catholic faithful in Goa can be complete without the mention of the Passos or Santos Passos, enactment of Christ’s passion, a custom unique to Goa which traces its origin back to the 16th century. Passos is a Portuguese name for certain pious Lenten exercises held in Goa and other Catholic communities in India.

It was introduced by a Jesuit priest, Fr Gaspar Barzeo in the mid-16th century, to strengthen and sustain devotion amid the faithful. Father Barzeo instituted a procession of flagellants, who shed abundant tears and scourged themselves (self flagellation) as part of the ritual.

However, after continuing for two centuries, these processions of flagellants were abolished by Archbishop Francisco d’Assumpçao e Brito, in 1775, who forbade the penitents from scourging themselves.

These processions, however, continue to date but devoid of the self-scourging. Now, a larger-than-life image of Christ, clothed in purple vestments carrying a huge wooden cross on his shoulders, is taken around in a procession by specially chosen bearers.

The procession generally wends its way through an earmarked route within the Parish’s jurisdiction, with halts called descansos, representing the three times Christians believe Jesus fell while carrying the cross to Mount Calvary.

On the way back the tableau carrying Our Lady, dressed up in a mantle of blue, joins the procession and together the images are taken to the church yard, where either a girl or a boy sings the ‘Veronica’, symbolic of the dramatic episode of Golgotha.

The passos is a highly emotional and spiritual part of the Lenten cleansing for Catholics in Goa, eventually leading up to the Holy Week and Good Friday where collective grief for the Crucifixion of Jesus Christ reaches a climax.

On the fifth Monday of Lent every year the Church of St Andrew in Goa Velha, Goa plays host to the world’s only Lenten procession of saints.

According to Rosario Rodrigues, author of the book ‘World’s Grand Procession of Saints’, the procession draws from a parade of pundits and priests, a practise of the village that pre-dates Christianity.

He writes that villagers narrated stories of Hindu glories, and that “to satisfy this craving of the locals, the Franciscans tried to revive the traditional processions” of the village by gradually replacing the Hindu characters with Catholic Saints.

“Therefore, towards the end of the 17th century the Franciscans instituted a penitential ‘procession of Saints’ in which 65 life size images of Saints were taken in procession from their Monastery at Pilar hillock through the neighbouring streets,” Rodrigues writes.

Devotees are known to duck under the palanquins of the saints as a means of cleansing their sins, during the procession – another custom predating Christianity.

This year’s procession of the saints will take place on March 18. 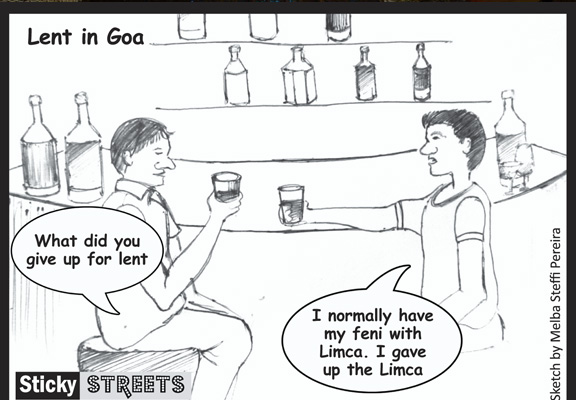