The cast of Curtains performing at Ravindra Bhavan, see Margao   Curtains, the musical comedy, leaves audience in a laugh riot Two years ago, they spammed our minds with melodious slapstick dialogues bringing to life Monty Python’s Spamlot which turned out to be a super hit. This year the same Bangalore-based cast began exactly where… END_OF_DOCUMENT_TOKEN_TO_BE_REPLACED

The cast of Curtains performing at Ravindra Bhavan, see Margao

Curtains, the musical comedy, leaves audience in a laugh riot

Two years ago, they spammed our minds with melodious slapstick dialogues bringing to life Monty Python’s Spamlot which turned out to be a super hit. This year the same Bangalore-based cast began exactly where they had left off, tearing the audience apart with fits of rhythmic laughter. Curtains, staged at Ravindra Bhavan in Margao, was presented by Big Ticket Entertainment, a Goan company that is bringing high-end Broadway musicals and stand-up comedy from around the world to Goa.

Curtains, a live musical whodunit murder-mystery comedy, was a play within a play that left everyone with a funny beat in their hearts. It begins with the mysterious death of the leading lady, Jessica Cranshaw, of the Boston Colonial Theatre on the opening night performance of a new musical. Pained by miserable reviews and unmerciful critics, the crew wastes no time in trying to fix the problem and replace her. They work hard to move on from the tragedy, but somehow or the other things aren’t that easily ‘pushed under the carpet’.

The Director of the play (who bears a striking resemblance to Woody Allen) was quick and witty with his responses. A small distraction arises in the form of a homicide detective, Lieutenant Frank Cioffi (also a musical theatre fan), who turns up at their rehearsals and has the cast and crew under lockdown. Everyone is a suspect. But this doesn’t stop the killer when the Producer is discovered ‘absolutely positively dead’.

All Lieutenant Cioffi has to do is to merely piece together the clues he’s gathered, correctly unmask the killer, save the life of the murderer’s next intended victim, render the fiend harmless, make sense of a troubling but telltale observation, and find a new finale for the show, little knowing that the curtain is just about to rise on the greatest joy of his life!

The singing was done in perfect harmony and the dancing had everyone tapping their feet to some original compositions. As the bodies piled up, the homicide detective blended in as an integral part of the cast and helped improve the quality of the play. Also holding the play together were two love stories – one of them being between the investigator and a cast member. 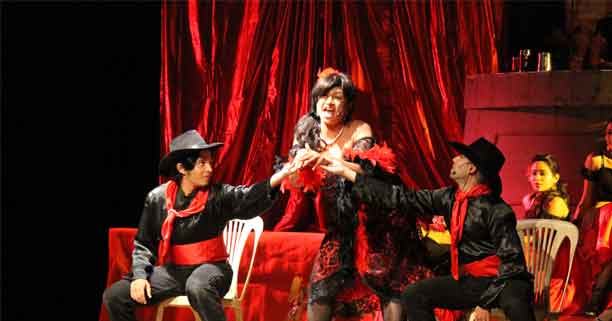 A still from the musical curtains

The musical held the integrity of the drama and producer-director Leila Alvares did not disappoint. Based on Peter Stones’ book and concept, it was liberally scattered with one-liners, witty dialogue, imaginative choreography, a few murders and a happy ending! It will definitely be a tough act to follow. And those who missed it missed a great show.