The Bold Truth About Goa’s Garbage Where there’s a will, there’s a way

The Bold Truth About Goa’s Garbage Where there’s a will, order there’s a way…

“We didn’t see much of Goa on our trip this year,” said Sushila Vij about one of her trips to Goa. “That’s not because we didn’t get out of the hotel much. We traveled quite a bit in the state. When I say we didn’t see much of Goa, I mean it’s almost invisible under piles of garbage along every street. I guess it was only time before the effects of integration with India began leaving its mark on a place that once used to be pristine.”

The once proud Goan is now a subdued, humiliated lot, inured to remarks like this, all the while resenting the ‘outsider’ for the various ills that now affect their home.

Goans were warned of a stark change in the way we would live, before the Konkan Railway was commissioned, making access to the ghat-enveloped state so much easier from the rest of the country. Migrants and tourists indeed have descended on Goa in droves, bringing with them a need for planning and infrastructure that never materialized.

Every once in a while, a politician or six will visit a first-world country on our dime, and upon return, make forthright noises about turning Goa into a well-managed, systematic state with a state-of-the-art mechanism in place. What seems lost on each politico is that Goa used to be exactly that, and the lessons she needs are right here in her past.

“I’m so ashamed every time I have a visitor,” rues Savio Braganza from Borda, who works on a ship. “I used to be so proud when we had guests and they would remark upon how different Goa is. Now I find myself apologizing for each heap of stinking rot, and there are so many, I do nothing but apologize. I’m going to stop inviting friends here. It’s depressing.”

In 2012, the Chief Minister himself, upon return from Germany raved about the system in Kaiserslautern, a town a hundred or so kilometres from Frankfurt, and how its waste treatment plant emitted “no smell, and had no flies” around it.

Goans were promised a similar treatment plant in a location that was left ominously undisclosed, with the CM promising that locals would have no objection to it, as it would be sufficiently distant from habitation. Two years on, we’re still a long way from Kaiserslautern, and flies are ubiquitous, not just around the several ad hoc dumping grounds for garbage, but on every street and in every neighbourhood.

“Seriousness, both from the government and the people to solve the problem is lacking,” says Clinton Vaz, frontrunner among Goa’s garbage activists. Vaz denies that a treatment plant is the end-all solution to the problem, stressing instead on awareness and education among the people for segregation at source. “Of course the governments will always go for the big-cost treatment plants, because there is a lot of money to be exchanged around these.”

He points to the disastrous attempt with the multi-crore treatment plant in Ghaziabad, New Delhi, which set out to treat mixed waste. Not only have public moneys gone to waste, the locals have been left to deal with the fall-out of the failure, he says.

“Source segregation has been achieved successfully in Panjim, and there’s no reason why it cannot be replicated everywhere else in the state,” he points out, adding, “When the waste is segregated at source, it presents a vast number of recycling and other solutions after. But will is lacking, and so is implementation. Take the case of Margao where door-to-door collection has just been commenced. While in Panjim the locals are separating their garbage before it is collected, Margao citizens have not been educated on this, nor have they been given the wherewithwal to follow this method. No training or awareness has been provided, not even to the 200 waste workers who have been hired to do the job.” 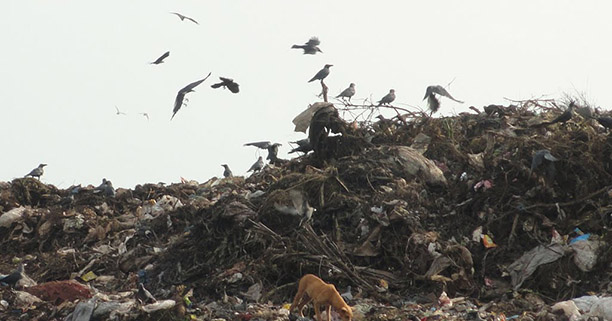 The real danger of Goa’s waste problem, which if looked at practically, is imminently solvable with just a little planning and foresight, is that it simply ceases to be a problem, like in other states of the country. Already, many Goans are so accustomed to the sight of garbage everywhere they go, that there is hardly a squeak on the subject, except among pockets of concerned citizens.

The blame is put squarely on the outsider, and while the contention may have more than some merit, it is local governing bodies that are failing Goa year after year, even while going out of their way—and duty—to promote tourism and real estate expansion.

No where is this attitude perpetuated more alarmingly than at Gogol’s Housing Board colony in the vicinity of Margao, as dogs, cows and birds hover around humungous piles of garbage that actually spill out on to the roads proper and onto traffic.

The CCP in Panjim, and other governing bodies in other cities wash their hands of the collection issue by simply pointing out that they have no where to put it. Landfills, where not shut down by protesting locals, are full to bursting with waste that is still waiting on the Germans to arrive and liberate us.

Garbage bins have all but disappeared from the state, after an ambitious plan in the capital city saw door-to-door collection systems put in place during the same Chief Minister’s previous tenure, ten years ago. While the populace of Panjim is now better informed about segregation and the value thereof, a significant lapse in judgment either forgot to address or conveniently ignored the reality of garbage generated outside homes.

With no bins at all to toss bags, wrappers and assorted waste into, citizens simply used the roads.

Always cart before horse, at frequent intervals, another batch of noises is made about a fining process “soon” to be in place. Anyone who chucks waste on the street will be caught and fined, says the Chief Minister every three months or so. Where the soon-to-be-fined citizen must in fact put the waste instead is a subject touched on less often.

The fact is, that unless the much-touted treatment plant is built and functional, and can actually accommodate Goa’s burgeoning waste, the CCP and other corporations cannot be faulted for pointing out the obvious, they have no choice but to leave waste where it happens to collect.

The nonchalance of the governing bodies and the authorities has led to some frankly bizarre measures being introduced around the state. As a deterrent to chucking garbage, usual suspect spots now sport boards with Hindu, Muslim and Christian religious symbols prominently displayed, beseeching locals and migrants, in the name of God, to quit littering. All in vain, of course.

After being herded out of several sites following serious health hazards caused to localities with landfills in the vicinity, thanks to continual and indiscriminate dumping without any follow up treatment and disposal whatsoever, Panjim’s corporation authorities pulled a coup by designating Campal grounds, along a main artery of Panjim as a dumping ground.

Seeing as there is significant profit to be made out of a mechanism for garbage removal and treatment, perhaps the logical solution for Goa would be to privatize its waste treatment problem. Small (migrant) entrepreneurs have already begun making a name for themselves in remote areas of the state. Chandor is kept surprisingly garbage-free not by its local municipality, but a determined sixty-year old with a gaily painting cycle-cart, who drives through the town picking up after it.

Lack of accountability among business owners on the other hand, combined with lack of enforcing bodies means shop-owners across the state will not even place a bin outside their premises. Simple solutions that could go a long way towards helping Goa reduce the eyesore that is indiscriminately chucked garbage are shunned in favour of elaborately ill-planned hoaxes regularly thrown at the perplexed Goan.

Manohar Parrikar’s government was re-instated with a mandate in 2012, with the average Goan confident that the CM would repeat and better his performance from the previous time, when improvements had been undeniable, and solutions innovative, even if poorly followed up. Despite the mandate however, we have a vastly different man in-charge now, a Chief Minister who seems to be concerned more with attending to interests in BJP’s central policies than addressing the immediate needs of the state he is in-charge of.

After over-shooting self-proclaimed deadlines on solutions to Goa’s waste problem several times over the last two-and-half-years he has been in power, he has once again set a date for a clean Goa. Parrikar promises that Goa will see a dedicated mechanism in place by the end of the year 2014, so its garbage woes are soon to be a thing of the past.

But they’ve heard this one before, so for the average Goan, for those that actually care still, it’s just another deadline that’s going to go to waste.