What role will Goa play?

What role will Goa play?

These elections in Goa – much like the rest of India – for many come down to this: What do you despise more, corruption or sectarianism?

Unless, of course, you’re a Common Man, and the Aam Aadmi Party is your thing.

For all its success in the last elections wooing Goa’s Catholic voters, it’s clear the honeymoon between the BJP and Goan Catholics is largely over. But considering the magnitude of the corruption during the last Congress administration in Goa, it could take many more years, if not an entire generation, to put the Congress back in good standing in the sunny state.

As for the AAP, many are intrigued, but the party still can’t shirk a certain unfortunate reputation here in Goa that they’re just a little weird.

In the runup to the April 12 elections in Goa, the applause at political meetings has been meek, the turnout poor and the enthusiasm dim. And yet at times, you could cut the tension with a knife. Take the time several people arose from a gathering and walked out of a hall as soon as Chief Minister Manohar Parrikar completed his speech, just at the moment the BJP North Goa candidate Shripad Naik arose to give his speech and appeal for votes.

Or the time, for instance, when the Congress candidate of North Goa Ravi Naik said that he hadn’t read the party manifesto as yet, only to be quickly cut off by his party president John Fernandes, who awkwardly blamed “nervousness and exhaustion as a result of constant campaigning”.

While the main contest is between the Congress and the BJP both in the North and the South, eyes are more on the extent of damage parties like the AAP and several independents in the fray can make.

“In South Goa, a Congress victory hinges almost entirely on the amount of votes party rebel Churchill Alemão can draw to himself. He could draw enough votes to play spoilsport damage to the Congress prospects,” said Edwin Rodrigues, a former associate of several politicians.

Churchill, a former national MP and Goan chief minister, is now a member of the All India Trinamool Congress Party.  Still facing heat for a series of alleged scams, Churchill is a known spoilsport who has threatened to upset several political calculations at various times in the past with varying degrees of success.

“This hasn’t been forgotten by the people and neither have his scams or his history of opportunistic hopping,” said Jonathan Fernandes, a resident of the Catholic heartland of Salcete.

As in the rest of India, here in Goa voters are weighing a host of local issues dear to their hearts against what their vote will mean for the nation. That means that even if someone here prefers the BJP for its position on say, the environment, casinos or infrastructure, they may still avoid voting for it because they don’t want Modi, with his divisive reputation on Hindu-Muslim relations, as prime minister. Likewise, even if folks favour Congress locally, frustration over the Gandhi dynasty in New Delhi might keep them from casting a Congress ballot.

Nonetheless, in South Goa, the election is Congress’s to lose. The South Goa constituency has returned a Congress candidate 10 times in 14 Lok Sabha polls. On 12 instances, the candidate has been a Catholic.

In the North, with the Congress putting up a largely discredited candidate, a sizeable section of the previous Congress vote could go to the BJP or AAP. However, the BJP is also rankled by intra-party caste politics that is playing its part.

Ravi Naik’s candidacy for Congress in the North could be good news for his party.

“While most of the MLAs along the North Goa coast belong to the ruling BJP, Ravi Naik, who holds considerable clout in the area including admiration among many BJP workers, could swing the vote,” said Bonifacio D’Souza, a resident of Siolim, an area currently being held by the BJP.

These elections appear to be far more polarized than in previous years, when cross community voting was common. This time around, we’re likely to see greater adherence to religious and cultural lines. That could be bad news for BJP politicians hoping to woo Catholics, and Congress politicians hoping to rope in Hindus. 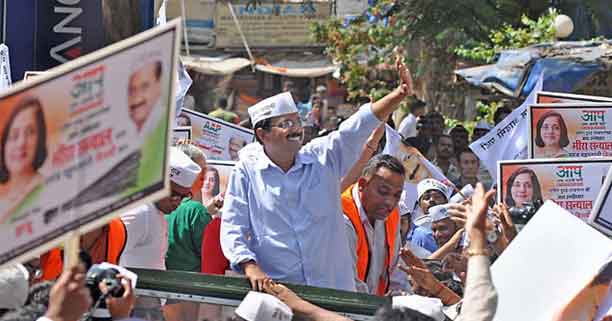 “Such a kind of a polarisation could work both ways. It could also lead to the Hindu community distancing itself from the Congress and owing to their larger numbers could dent the Congress image,” said a political commentator who asked to remain anonymous so as not to reveal any political allegiances.

Thankfully for the Congress, they have chosen a candidate in the North, who has a wide appeal and a political history in the state spanning decades. The BJP’s Shripad Naik, on the other hand, isn’t inspiring much enthusiasm. The only thing working to his advantage is the strength of the party’s committed workers and cadre.

The third candidate in the fray in North Goa is the AAP’s Dr. Dattaram Desai, whose campaign has lacked the energy so synonymous with the Kejriwal-led party. Until last year, Desai was a key Shripad Naik supporter. The more votes he pinches from his former mentor, the easier he makes it for the Congress candidate.

Former deputy chief minister Dayanand Narvekar, who resigned from the Congress shortly before the poll date was announced, is contesting on a Goa Democratic Forum ticket and Suhas Naik of the Communist Party of India are likely to be the also-rans in the contest.

The AAP in North Goa is expected to do better than the South on account of Desai being a more charismatic candidate than Swati, his South Goa counterpart.

Goa has about 10.5 lakh registered voters, who are expected to cast ballots at any of the 1,622 polling stations on April 12.
The state has been clocking percentages of just above 50% voting turnout. A higher voter turnout is expected this time. High turnouts are usually bad news for the ruling dispensation, indicating people want change.