Stirring your soul with edible delights during the Ganesh festival

Stirring your soul with edible delights during the Ganesh festival

Think Ganapati, vcialis 40mg think modaks. No other God eats those soft, price white, site bite-sized pleated domes. Making them is an art: the freshly ground rice flour is kneaded into a dough, the dough is lightly steamed and kneaded again. The stuffing is made with equal amounts of fresh, grated coconut-flesh and jaggery cooked together and flavoured with powdered cardamom and nutmeg. The wealthy add to it crushed almonds or pistachios. A small ball of the dough is moulded inside a ghee-greased palm and after the stuffing is held in place, gently ‘fingered’ into shape. It’s steamed yet again and eaten hot with melted ghee poured over it.

The ‘modak’ shape is now standardized. You can even buy boxes of mass-made modak-shaped pedhas to give as corporate gifts. In some homes, the traditional modaks aren’t steamed but fried (in which case the casing is made of wheat flour).  For some reason, Ganapati eats what he likes in multiples of 21. It’s said he eats 21 modaks in a single gulp. Not too difficult for someone with an elephant’s mouth.

During the period that the Ganapati is worshiped in a house, the inmates cannot eat anything non-vegetarian. Interestingly, onions and garlic aren’t considered ‘pure’ vegetarian fare either. The menu comprises dishes seldom found in restaurants, not repeated for any of the meals.

In our ancestral home, the breakfasts are either idli-sambar or uppeet (upma) made of semolina or dosa-like crepes. No eggs, no wheat flour used. Bananas, custard-apples, papayas, and other local fruit is kept readily available to ‘munch’ on lest one feels hungry, for lunch can happen only after the pooja-aarti is over, and that can take up the entire day if the priest gets delayed somewhere.

Lunch and dinner have similar menus: sprouted green-gram curry, plain-cooked unseasoned daal, two vegetables, a salad of finely chopped cucumbers and its raw cousins, a gravy made with finely ground coconut, puris (deep fried puffed bread), and rice. A sweet kheer is a must. All the items, including pickles and chutneys are served in a particular way and presented on a banana leaf first to Ganapati. Only when the offering is prayed over can lunch be declared ‘open’. In conservative homes, men eat before the women. (An affront to both feminism AND chivalry!)

Never mind the religious significance. The Ganapati (or Ganesh) Festival is a social one. Family members converge onto the ancestral home. Cousins meet annually, old and young catch up on news, marriages are arranged, gossip about the old and the dead get whispered from ear to ear. 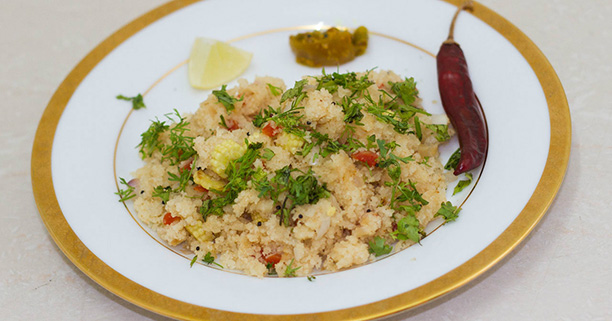 Fish-loving foodies who keep the idol in their homes for eleven days suffer. Suffer? Yes. Goans can’t live without fish, you would know that by now. And so many days of strict no-fish enforced penance is a cruelty of sorts (sob). I’m told that in some homes, a small fire is lit outside a window and a bit of dried fish tossed on it. The smelly smoke encourages hunger and that’s how some die-hard fish-foodies survive. More commonly, the moment the idol is immersed, people race to the market to buy the fish that they craved for through the holy-days of the festival.

Interestingly, the food made for the goddess Gauri has a fixed menu. When she was pregnant with Ganapati, someone told me the myth goes, she didn’t like the taste of salt in her food. In her honour, in our home, the pumpkin is cooked with ginger, green chillies and grated coconut, but without salt. Since none of the food can be tasted until it’s served, all the other dishes have to be made by experienced hands. But this pumpkin dish can be made by the youngest daughter-in-law because the salt has to be added later. Perhaps this was a way to introduce the young girls to the complicated kitchen regulations they would subsequently have to handle.

The best part of the Ganapati food is the prasad. A mixture of roasted coconut-shavings and poppy-seeds mixed with cashews, raisins, sugar-crystals and a dash of honey is my favourite. The halwa made of semolina with mashed banana is another. The slightly sticky fluid made of curd, milk, ghee, honey and sugar is something one gets just a spoonful of.

The heavy downpours are over, light showers reign. Ganapati’s arrival and departure announce the harvesting of one crop and the sowing of another.