Arvind Kasthuri and Priya Mendens as Tevye and Golde

Ever since I saw Fiddler On The Roof in Goa several days back, my family has been begging me to stop. Unfortunately for them, I’ve got “If I Were A Rich Man”, “Tradition” and “Do You Love Me?” on the mind, and I can’t stop singing. OK, so I’m a Fiddler on the Roof fanatic. I know every scene and every song, I’ve seen the play and movie many times and I have performed in several productions. So with my Fiddler credentials solidly intact, I guess I’m in a pretty good position to write a candid review of the Sept. 6 performance at Goa’s Kala Academy. I do hope any criticism will be taken for what it’s meant to be: constructive.

It’s true the show wasn’t exactly up to Broadway standards. But it’s important to keep in mind that it was presented by the C.A.U.S.E. Foundation, a non-profit organization that donates its profits to charity. The lead character, Tevye, was played by Arvind Kasthuri, who is a professor at a medical college by day. And so it is with the rest of the cast, who are students, lawyers, doctors and other professionals giving their time, talent and energy to a worthy cause.

The bottom line is that this fine group of people put on a lovely show that was highly appreciated by the Kala Academy’s packed auditorium. The production was true to the original, no one sang off key, the live music was professional and there were some truly noteworthy performances.

When it came to the acting, three characters stood out – Golde played by Priya Mendens, Ranjini Prabhu’s Hodel and Raphael Thomas’s Perchik. Mendens as Golde, the family’s sassy matriarch, was convincing as a Jewish mother, with a power-behind-the-throne presence that endearingly chipped away at Tevye’s ‘master-of-the-house’ status. Prabhu as Hodel, aside from very much looking the part of a Jewish beauty, graced the stage with a sonorous voice and an animated persona. Her “and affection” response to her suitor’s unsentimental marriage proposal was perfect, evoking Michelle Marsh’s original performance in the 1971 movie.  That cerebral suitor, Thomas’s Perchik, exuded much of the same energy and intelligence of the best Perchiks who’ve performed the role over the decades.

You can’t think of Fiddler on the Roof without thinking of Tevye. Indeed, the play was originally titled “Tevye” and both the play and the movie were based on the Yiddish author Sholem Aleichem’s 1894 book “Tevye and His Daughters.”  Chaim Topol, Zero Mostel, Theodore Bikel and Leonard Nimoy (of Star Trek fame) were some of the actors who helped make Tevye one of the great theatrical sensations of our time. He’s a larger-than-life character who must be played with panache. 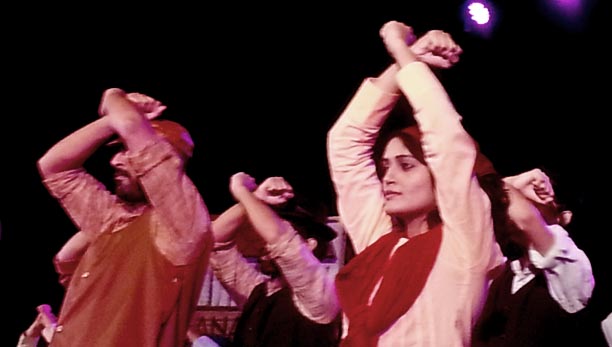 Well-choreographed dancing during Fiddler On The Roof

I have to admit a certain mild disappointment when Kasthuri’s somewhat subdued Tevye walked on stage last weekend, with a shimmy that looked more like a belly dance than the intended strut of the Eastern European milkman. And yet, this Tevye grew on me as the play progressed. His humour, lovability and adoration for his five daughters did, in the end, shine through. And it can be safely said that the tenderness that he and Mendens brought to “Do You Love Me?” – the song about their feelings for each other after 25 years of marriage – was the highlight of the play.

It is true that Tevye is supposed to steal the show, and Kasthuri’s didn’t quite do that. Tevye must be over the top, not subdued – and the burying of some of his lines, along with those of other actors, showed some directional lapses. After Perchik informed Tevye that he and Hodel were asking for a blessing, not permission, to marry, Tevye responded almost in monotone: “I give you my blessing and my permission”. What was required, of course, was the line “I give you my blessing,” then a pause, followed by a loud and emphatic “AND MY PERMISSION.” Without this, the point is lost.

And when Tevye reaches the end of “If I Were a Rich Man” and sings of his longing to have the time to discuss holy books, pray and “maybe have a seat by the eastern wall,” a light-hearted song suddenly becomes a wistful and poignant one. That has to be reflected in Tevye’s voice. “That would be the sweetest thing of all,” should have been sung in a slow, melancholy and deeply emotive tone. (I think the play’s producers need to take another look at Topol’s “If I Were Rich Man” for tips on how to ramp up Kasthuri’s version).

Another missed opportunity occurred when Motel (played by Jude Lazaro, who it must be said came off as the most Jewish of any character in the play), got a new sewing machine and stated, without much emotion, “No more handmade clothes.” That line has to be almost shouted to have an impact, and for the irony – remember, nowadays we all LIKE handmade things – to come through.

Other direction issues include giving Tevye prayer beads (he’s Jewish, not Muslim) and lighting a menorah on the Sabbath (menorahs are used for the festival of Hanukkah). The trashing of Tzeitel and Motel’s wedding required far more intensity than three Cossack soldiers knocking over a couple of candle sticks. Good fiction must ring true, and these missteps violate that principal.

Is that to say Leila Alvares did not do a good job directing the play? Not at all. The story, music, acting, dancing, setting, costumes, lighting and everything else that went into this far-from-easy-to-produce extravaganza all came together in the end. 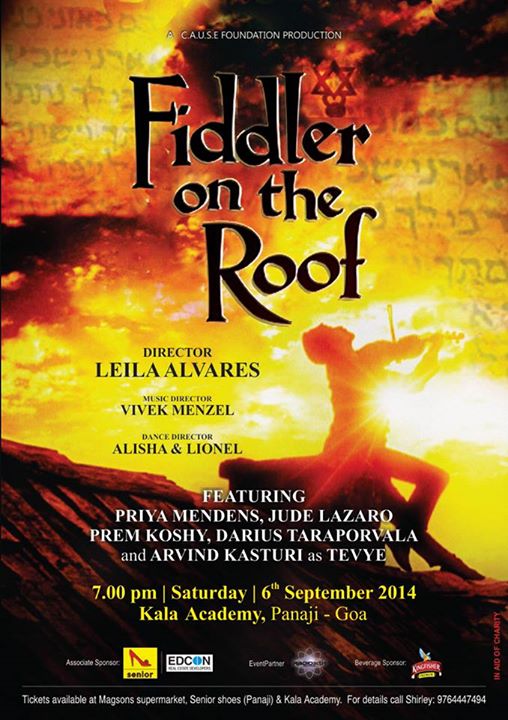 Despite the handful of missed opportunities and lost lines, there were enough bull’s eye hits to make up for it. These included Shyju Varkey’s reverberant cry setting up the “L’Chaim” (“To Life”) number, Prem Koshy’s convincing umbrage as the rotund Lazar Wolf and the honest simplicity of two of Tevya’s other daughters, Tzeitel (played by Alisha D’Souza) and Chava (played by Nisha Idicula). If there was any actor who understood that the characters of Fiddler on the Roof are anything but understated (like Jews in general), it was Priyanka Shetty and her exaggerated Fruma Sarah. Darius Taraporvala was well-cast in the role of Yente, definitely looking the part and touching the right notes. One thing for him to keep in mind though (yes, this female part was played by a man) is that Yentes are loudmouths – I know, I grew up with them – and his could use a dose of rambunctiousness.

Judging from the audience’s reaction to the play – and the full auditorium – it was clear to me that Goans are hungry for this kind of cultural event. Kudos goes to Richard Dias and his event company Radioactiv Entertainment for bringing the show to Goa. 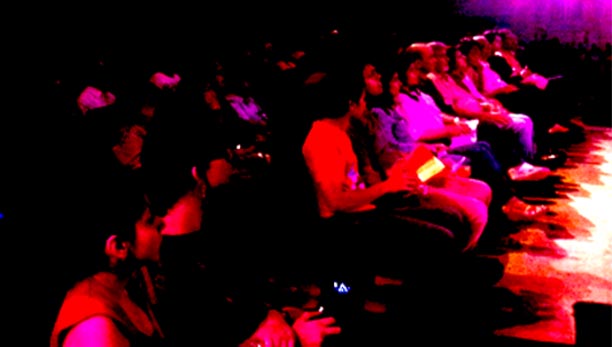 The show was sold out

The musical’s title gets its name from the painting “The Fiddler” by Marc Chagall, whose surreal paintings of Eastern European Jewish life often included a fiddler – a metaphor for survival amid great uncertainty. Fiddler on the Roof is about joy and tradition, tragedy and humour – and this C.A.U.S.E. Foundation performance captured all of that well.