Stirring the pot Slightly bigger than a standard matchbox, the gambling slip looks fragile. As if the thin slip of cheap paper will disintegrate into your moist hands. Quite in contrast to the sheer tenacity and powerful outreach of the matka gambling industry in Goa and other parts of Western India. Not surprising, because… END_OF_DOCUMENT_TOKEN_TO_BE_REPLACED

Slightly bigger than a standard matchbox, the gambling slip looks fragile. As if the thin slip of cheap paper will disintegrate into your moist hands.

Quite in contrast to the sheer tenacity and powerful outreach of the matka gambling industry in Goa and other parts of Western India. Not surprising, because matka (pot in English, perhaps derived from poker’s pot concept) took root here, decades before the first offshore casino dropped anchor in the Mandovi.

Government after government in Goa has attempted to crack down on this trade, but has failed every time. One such crackdown fell through as recently as October-November last year. The police blamed the failure on lack of manpower.

There are 100 winning possibilities every day from 00 to 99. But three winning numbers are declared by a central control centre in a staggered manner, one digit at a time by randomly choosing three cards from a deck. The sum total of face-value of these three cards is the first (ten’s place digit) of the two-digit winning number for the day. The digit n the single unit’s place is picked in a similar manner after gap of about two hours.

Both the Kalyan as well as Mumbai Main Matka bazaars use the same methodology. Winning numbers are communicated through phone calls and text messages to the bookie networks

It would take an army of policemen and a bellyful of gumption to take on an underground network which, according to industry insiders, has at least 10,000 bookies in Goa alone.

These footsoldiers accept bets from roadside kiosks, small eateries and stores. One resourceful bookie even accepted bets in an autorickshaw near the police headquarters. In the evening, he’d literally drive his work-station home.

Matka is essentially an underground lottery that works on the sidelines of various lotteries operated by the government. Since the size of the matka industry has not been documented, it’s not clear which is bigger – matka or the official lotteries.

Matka has always been illegal, and authorities in the past have indicated a desire to legalize it and get a piece of the financial action. Generally speaking, bookies, not players, get arrested for matka.

Understandably, the matka industry doesn’t believe in cheques or demand drafts and all bets, right from a rupee (yes you can still bet a rupee) to millions of rupees, are paid in cash on the barrel. Its contribution to western India’s burgeoning black market economy is staggering. A conservative estimate made by the police in Mumbai, unofficial headquarters of the matka trade, pegs the industry’s turn over at Rs 300 crore every day. 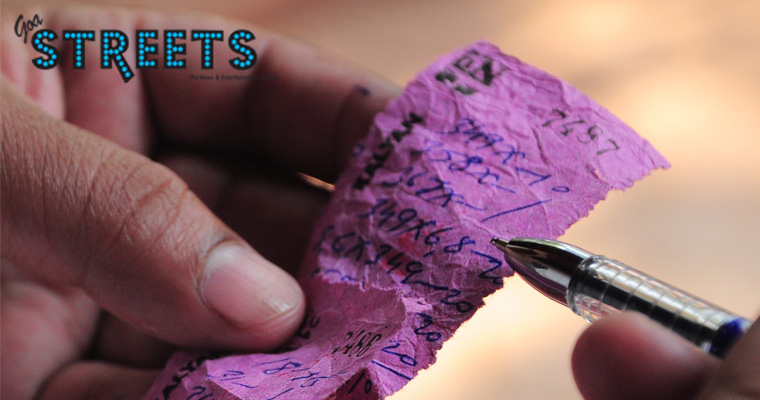 Deputy Superintendent of Police Umesh Gaonkar, however, begs to differ.

The reason why police action against matka fails is because India’s gambling law is tedious, he says.

“Raids have to be conducted meticulously and every minute detail of the matka business, the slips, the cash involved have to be attached. It has to then be followed up in the courts. We are hard pressed for manpower to do all this for every matka bookie in town,” Umesh told Streets.

There could be another reason why the police have failed to work against matka here. This form of gambling cuts across social strata, right from a beggar who can wager a bet as low as Re 1 to multimillionaires upping the ante by many zeroes, lining or pinching virtually every kind of pocket.

“From construction workers to doctors, lawyers and even civil servants, they all play matka and wage their bets with me,” a Panjim-based matka bookie told Streets.

Matka’s popularity, complicity of politicians in the trade and regular pay-offs (colloquially known as haftas) to the police ensure that the sun doesn’t set on the gambling empire, the bookie further levelled with me. Through 2009 and 2011 the police arrested over 1800 bookies for accepting bets in Goa, but these arrests have hardly made a dent on the trade.

“No other gambling option I know of gives you such mind-blowing odds. That’s the prime reason it’s so popular,” says a successful lawyer and an occasional gambler who, like most interviewed for this story, didn’t want his name used.

The odds actually range from mildly attractive to near impossible.

Bets are recorded by bookies on tiny, dark pink-coloured slips in duplicate. If you win, all you need is the original slip to claim your money.

Matka follows two schools of operation. One day-time operation called Kalyan matka, named after a Mumbai suburb, and the ‘Mumbai Main’, which functions at night and stretches from northern Karnataka to Gujarat.