Some fabulous suggestions for places to dine under the stars this New Year’s in Goa.

Even if Goa itself is no longer perfectly pristine, case there is something perfect about dining under the stars during our glorious tropical winter. Especially when you do so to the sound of crashing waves or the sweet melodies of jazz, or perhaps with a view of lit-up ships or the elegant interiors of a well-appointed bistro.

Here are some fabulous suggestions for places to dine under the stars this New Year’s in Goa.

If you’re wearing stilettos or aren’t much in the mood for walking a small but not totally insignificant distance, have a resort buggy drive you to this lovely establishment right on the sea on the grounds of the Park Hyatt resort at South Goa’s Arossim Beach. The fresh seafood is the real draw here, but other dishes such as the New Zealand lamb chops and the Angus beef rib eye are also well worth trying.  Aside from the great food and wine selection, and the seating atop elevated wooden deck spheres, the biggest attraction here is the feeling of openness – the wide unobstructed lawns of the resort, the infinite sea and sky. There’s magic here. 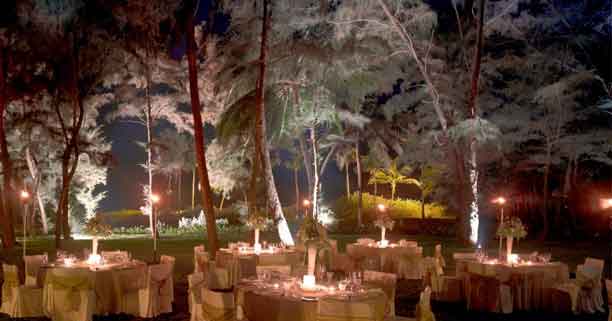 Rara Avis is a well established French restaurant in New Delhi, and though its Goan avatar (called Rara Avis Konkan) is a newcomer, it’s already making a splash on the local culinary scene. Set on the softly lit terraces of a home overlooking the Baga River, with tasteful designer furnishings, Rara Avis (rare bird in French) is a lovely choice for dining under the stars. As far as the excellent French food goes, check out the meat or fish platters or the Casolette de Gambas or the Poulet aux Morilles. For dessert, you can’t go wrong with the Suicide au Chocolat. Also check out their jazz nights.

This highly appealing gourmet establishment features European and Fusion cuisine, with a good selection of Goan delicacies as well. Listen to soft jazz and blues on layered terraces, below an elegant lounge adorned with black-and-white images of Marilyn Monroe and Asian-inspired art. Try the Norwegian Gravalax, the Mussels in White Wine Sauce, the Pepper Steak and the Chilli Garlic Prawns. The pizza and burgers are also impressive. (Full disclosure: this lovely establishment is owned by Streets’ publisher Marisha Dutt’s sister Devika and ever talented brother-in-law Thomas, but bias and nepotism aside, we truly believe that when it comes to dining under the stars, it’s hard to beat Susse Café!) +91 832 2479020/ +91 9822089818

Next time you’re in Panjim at night during the high season, stop by the Marriott, walk through the open-air lobby and peer out toward the Mandovi River. What you will see on the Marriott grounds between the pool and the riverside are wonderfully elegant candle-lit tables, beckoning you to walk down the steps for a meal at Simply Grills. The draw here, aside from the glamorous views of the floating casinos on the Mandovi, are the barbecued meat and seafood dishes. A great place for a romantic dinner under the stars.

This restaurant’s been around for a long time, and it doesn’t disappoint.  Originally a Portuguese-style villa built in 1932, owner Yellow has created something of a visual Shangri-la with her whimsical lighting, built-in stone booths and inviting cushions gracing the property, which stands as an oasis away from the Baga bustle. A recent Goa Streets review recommended the Seafood Paella, the Waffles with Goat Cheese and the Seared Tuna Fillet with Miso Sauce (as well as Death by Chocolate for dessert).