We stand at the threshold of a grand Indo-Portuguese house at Verna. I am accompanied by Xavier Cota, a writer best known for his translations of Konkani writer Damodar Mauzo’s short stories. We are here to meet his friend and erstwhile work colleague, José Orlando de Abranches, the owner of this splendid house and a collector extraordinaire.

We step into the house at exactly nine o’clock, the time of our appointment, and are rewarded for our punctuality by a chorus of musical notes from the house. Clocks ring out the hour, not one or two clocks but over a hundred of them. They chime, trill, cuckoo and beep away, the unusual symphony stretching on for a few more minutes, as some lethargic timekeepers join the party late.

“There are more than 145 table clocks over there,” says Orlando, as he is known, as the clocks settle down to a contented clucking and whirring. “I start winding them at seven in the morning and finish by seven-thirty.” Some of his timepieces have a 8-day winding while a few stay wound up for 31 days.

Orlando, a retired bank officer, started collecting clocks in the seventies. “I got my first clocks from a colleague at just ten rupees each. They were not working, just lying in his cupboard.”

I get a crash course on clocks, and realise that behind the bland old faces there lies quite a pedigree. A 1924 Reguladora table clock made in Portugal stands next to a German-make Wehrle alarm clock with three knobs for winding, one being for chiming. “Alarm clocks are not meant to chime, but I have a few that do, 22 to be precise,” says the collector. Another German made Kaid clock, with three knob points on its face, chimes every 15 minutes.

I observe that not all the alarm clocks are working. “Just pick up any clock,” their owner challenges me. I do so. He swiftly winds it up and holds it up to my ear. I hear the soft clicking of the revived clock. “Some have not been wound. But every one of them works.” 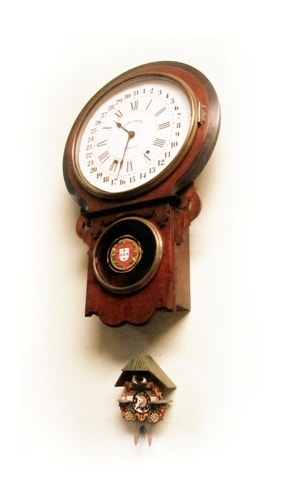 “I taught myself to repair them,” he adds. “I dismantle the mechanisms, soak them in kerosene and then reassemble the clocks.” He prefers to restore clocks with original parts, but if those are unavailable he reluctantly cannibalises junked pieces for parts. But he is passionate about bringing the clocks back to life, even with organ transplants. “This missing knob has been replaced by a piece of a bicycle spoke, and that knob is actually a ballpoint pen,” he explains his innovative gadgetry. The name Orlando is inscribed in a neat cursive script on the clock dials or faces that he has replaced. A table in one of the rooms of his immaculately preserved house is used as a workspace, neatly arranged with tools, broken down clocks and the all-important magnifying eyepiece.

The clocks show the passage of technology and style. Standing next to the older vintage pieces an Art Deco styled clock shows off the fluting and chevrons of that Modernist era. Then came the Japanese Seikos and Citizens. An aficionado of the wound up clock, Orlando shows a disdain for battery operated clocks. There are a few modern timepieces in his collection that seem kitschy, but that too is a part of history—perhaps a symbol of the cheapening of time. But a Japanese Art Deco clock springs us a surprise as it tinkles a lovely tune—Lara’s Theme from the film Doctor Zhivago. 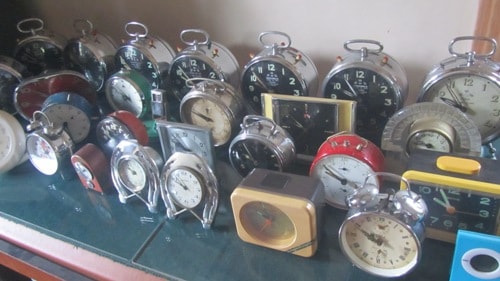 Wehrle, Reguladora and other alarm clocks

His wife Maria Ester Rebelo de Abranches, an accomplished Mathematics educator, is proud of her husband’s collection. “After retirement he went on a trip to Europe,” she confides to me. “And he came back with a suitcase of old clocks, bought from the ‘feira de ladra’, the chor bazaars of Portugal. My daughters and I did not ask for any gifts, as we know how much he loves clocks.” Orlando is also a very reticent man who dislikes unwanted invasions of his privacy. He would rather spend time restoring an old clock than showing off his collection to strangers.

An elegant lantern clock holds pride of place in an inner hall, bearing the name of Peter Closon of Holburn & Bridge, London. A Gustav Becker long-case clock stands at the other end of the room. But it is a Seth Thomas clock on the wall that instantly draws me. My family has an identical piece at our house in Velim. During our childhood it was a daily ritual to clamber onto a chair and wind up the two points on its face. But in our teenage years as our father fell into a prolonged illness, Old Seth also grew cranky. The veteran clock finally gave up the ghost and now stands on our home wall silently. Orlando sees my sadness. “Bring it over and I will try to repair it.” I am overjoyed. Our old Seth Thomas will soon be resurrected after 30 years! 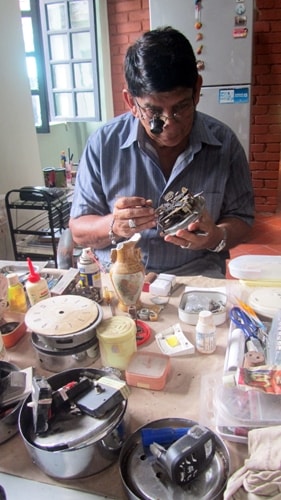 Tempus Fugit—Time Flies—says the face of one of the long-case clocks, and Xavier and I soon have to take our leave. But not before the self taught horologist treats us to some tunes played on his mandolin and mouth-organ. He plays the flute and the guitar too, entirely by ear, not having received any formal training. His clocks and musical instruments get the same love. It is exactly eleven o’clock as we step out of the house, and yes, a triumphant symphony from hundreds of healthy clocks sees us off.