The influences of 451 years of Portuguese rule have percolated into every facet of Goan culture, be it food, architecture, language, costume, dance or music. To celebrate Indo-Portuguese ties and culture, the Consul General of Portugal in Goa, Mr. Rui Carvalho Baceira hosted an art exhibition at his residence at Altinho, commemorating Portugal’s National Day—‘Dia de Portugal, de Camões e das Comunidades Portuguesas’.

The themed exhibition held in the second week of June was titled ‘Balcão’. It was curated by artist Subodh Kerkar, and featured 30 paintings by 18 artists of Goa.

Mr. Baceira affirms that the best way to promote relationships between India and Portugal is to promote art and culture, which is without borders. “This is first time I decided to have an exhibition of paintings at my home in Goa. Yes, I had to move my personal paintings, and furniture to display the work, but it’s a great experience,” he said, when I visited the show.

Not everyone has space in their homes to display 30 works including sculptures. Numerous paintings displayed in a smaller area and hung close together tend to divert the focus of the viewer. But the spaces in this gorgeous split level house and its natural light brought out the diverse facets of the paintings.

“The Consul General asked me to organize a thematic exhibition, and what better theme to chose than the ‘balcão,’ an aesthetic feature of old Portuguese homes, also incorporated by the Goans  in their homes!” said Subodh Kerkar.

“It was quite challenging to construct an exhibition dealing with the complex cultures in Goa, without approaching sensitive issues within sections of the Goan society,” said Kerkar. The exhibition brought together progressive contemporary artists of Goa, working with oil, water colour, mix media, acrylic, digital print and sculpture; in small and large format. 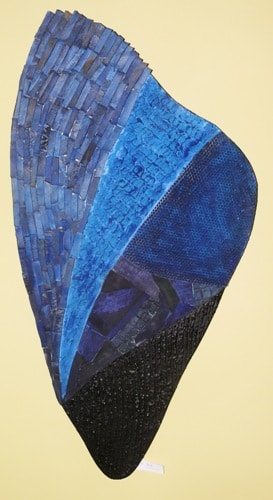 I am partial to abstraction, and Siddarth Kerkar’s wall sculpture ‘Wing’ in rubber and wood was the first to catch my eye. Pradeep Naik had two semi-abstract busts of a Viceroy in subdued hues. Siddarth Gosavi showed ‘Still Life’, an arrangement of fruits on acid free paper in acrylic.

Vitesh Naik’s humorous caricatures of the common people of Goa, have always been very expressive. The viewer can figure out their conversation, their personal feelings and idioms. His work titled ‘Bhatkar’ features a Goan landlord and lady and a wriggling piglet. It certainly is a ‘pintura deve ter em sua coleção’ (a painting you must have in your collection). Francis De Souza depicts the meeting of the East and West, and the unfolding of events and images of the fisher folk of Goa. 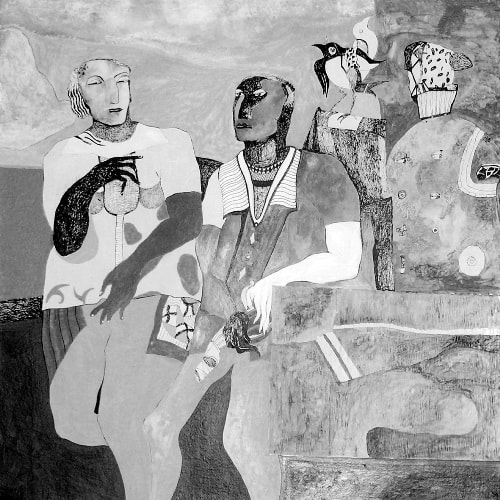 The Magician from the West by Francis De Souza

Harshada Kerkar, whose muse is Malala Yousafzai—the Pakistani child activist shot in the head by fanatics, renders her communicative portraits in soft hues in dry pastel. John Pereira depicts the interiors of a chapel in a work titled ‘Amore & Tristeza (Love and Sorrow)’, and an Indo-Portuguese house, with intricate textures and detailing.

Shripad Gurav portrays ‘Leisure’ in mix media on cardboard, which lends a significant background. Aadhi Vishal focuses on the Indo-Portuguese trade, incorporating the phase of the pre-Portuguese era, with the symbol of the Kadamba Lion in colourful sketching. Kedar Dhondu’s video projection is about the physical rot that has set in the people and balcãos of old houses, titled ‘One Day These Will No Longer Live.’

Vaibhav Kitlekar’s floor sculpture ‘Vedic Handicap’ in fibreglass is a thoughtful work. Subodh Kerkar exhibited wall-mounted wood sculptures of a chilli and maize (which the Portuguese brought to India) with a viceroy’s head on the stalk, and a floor sculpture in fibreglass and rubber tyre, of a rooster titled ‘Chicken Kafreal’ (again a dish that came to Goa during colonial rule). They all illustrate the artist’s multifaceted perceptions of the Portuguese ethos. 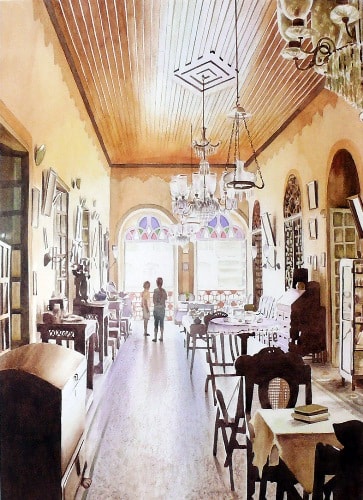