The Goa International Jazz Live Festival, held from 28th to 30 of November, lived up to its promise of being one of the most iconic Jazz fests in the country. It was a three-day extravaganza inviting acts from France, Switzerland, USA, Canada, Brazil and of course, India.

The lovely Baywatch resort in Benaulim served as the venue, an apt setting for live performances especially for rock, jazz, blues and indie music. The Jazz Fest was packed with enthusiasts from around the globe, a fraction of them being hotel guests while the rest had travelled long distances just to listen to that soul stirring music. The start of the festival couldn’t have been more electrifying.

The first act of the festival was led by Mishko M’Ba, a French bassist paying tribute to the ledendary Jaco Pastorius. The way M’Ba moved his fingers on the fret board was hypnotic in itself while the bassline that one could hear was completely harmonized with the Saxophone, Guitars and Drums to back him up in a collective called Mishko M’Ba and the Jaco Pastorius Tribute Band.

Next up was the Tarun Balani Collective. It had Tarun Balani on drums, Juilie Hills from USA on Vocals, Derek Beckvold on saxophone from USA, Wesley Allan on Viola (Bass) from Canada and James Hill on the piano from Canada.

The last gig of the day was by a Canadian funk-jazz-bop-rap band called Shuffle Demons. The band comprised of Richard Underhill on saxophone and vocals, Perry White on saxophone, Kelly Jefferson on Saxophone, George Koller on Bass and finally Stich Wynston on drums.

Just as the sun was dunking into the ocean right behind the main stage at GIJLF, the first act of the second day of the festival took the stage under a mesmerizingly purple sky. The performers who were obliged to perform at such an apt light setting were none other than the Goa Acid Fusion Jazz, a tribute to U. Srinivas. With Elvis Lobo on the guitars, Hari Kumar on the Violin, P.L. Sudheer on Ghatam/Kanjiri/Konnakal, Lew Hilt on Bass, Shayne Ballantyne on side guitar and Ori Balak from Israel on drums, this band made their instruments have conversations with one another. They were that harmonized.

The stage was then taken up by a spell binding act by Louiz Banks Trio, with Louiz Banks, the godfather of Jazz in India, on the keys, Gino Banks on the drums and Sheldon D’Silva on the bass. This was followed by the most iconic act of the evening, a collaboration between Grammy award winging Ricardo Vogt and critically acclaimed singer (and Ukulele player), Veronica Nunes, both belonging to Brazil. The band comprised of Karla Pfützenreuter on percussions (Germany), Tarun Balani on drums (India), Derek Beckvold on saxophone (USA), and James Hill on piano (Canada). 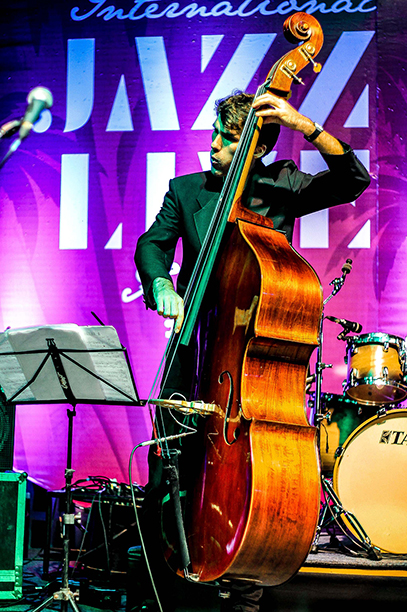 The third day at GIJLF started off with a rather mellow and melodious tone with Generation featuring Mohini Dey on stage. Having produced a new project with A.R. Rehman and several Coke Studio and MTV Unplugged sessions, Mohini, the 18 year old prodigy killed it with her own project. The band comprised of Esani Dey on the guitar and Gino Banks on drums. This was followed by a special Jazz & Soul set by Pawan Benjamin Quintet with Pawan Benjamin on saxophone, Vaundhara Vidalur on vocals, Karim Ellaboudi on keys, Gino Banks on drums, and Sheldon D’Silva on bass.

Then came the saddest and the happiest moment for the Jazz lovers in Goa. Yes, it was the last act of the festival to come up. Greenwoman by Malcolm Braff from Switzerland kept the happiness levels up with their pop electro-jazz grooves mixed up with a volcanic energy by the maestro Malcolm Braff. The band further comprised of Bjorn Meyer on bass, Claire Huguenin on Vocals, Lukas Konig on Drums, and Alexandre Gaeng on VFX. 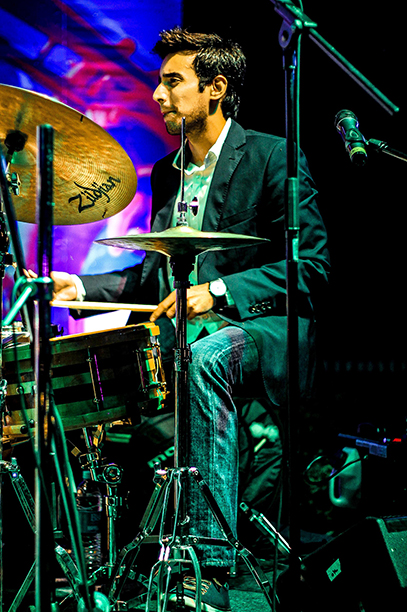 And so the evening ended with the wildest act of the festival. If you love live music, you must keep track of Art Escape’s upcoming gigs. The organizers, Art Escape, has a mission is to create cultural events that bring the creative community together and Gatecrash, who promotes international bands and develops the jazz scene in India, the main motivation behind this event is to get talented, innovative and modern jazz musicians to showcase their music on a single platform to a curious and open-minded audience. 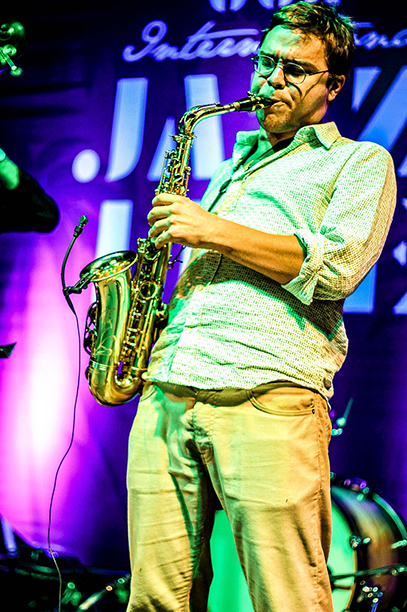