They Are All Well Preserved At Our State Library

They Are All Well Preserved At Our State Library

The archives of the Goa State Central Library at Patto, abortion Panjim has a delightful collection of Konkani periodicals dating back even to the late 19th century! The earliest Konkani journal Udentechem Sallok was launched in Pune in 1889, unhealthy a bilingual published in Konkani and Portuguese, edited by Eduardo Bruno D’Souza. I could not locate a copy of that pioneering paper, but let’s look at ten of the oldest Konkani periodicals that can actually be browsed at the Library.

1. Niz Bhavarti (True Believer)
This Konkani supplement in Roman script was published with O Crente, a Portuguese religious weekly, printed at the legendary Tipographia Rangel at Bastora, Bardez, Goa. ‘Fides Invicta Triumphat’, proclaims the Latin saying above the Konkani masthead. ‘The terrible punishment for selfishness’ runs the title of a front page article of an edition 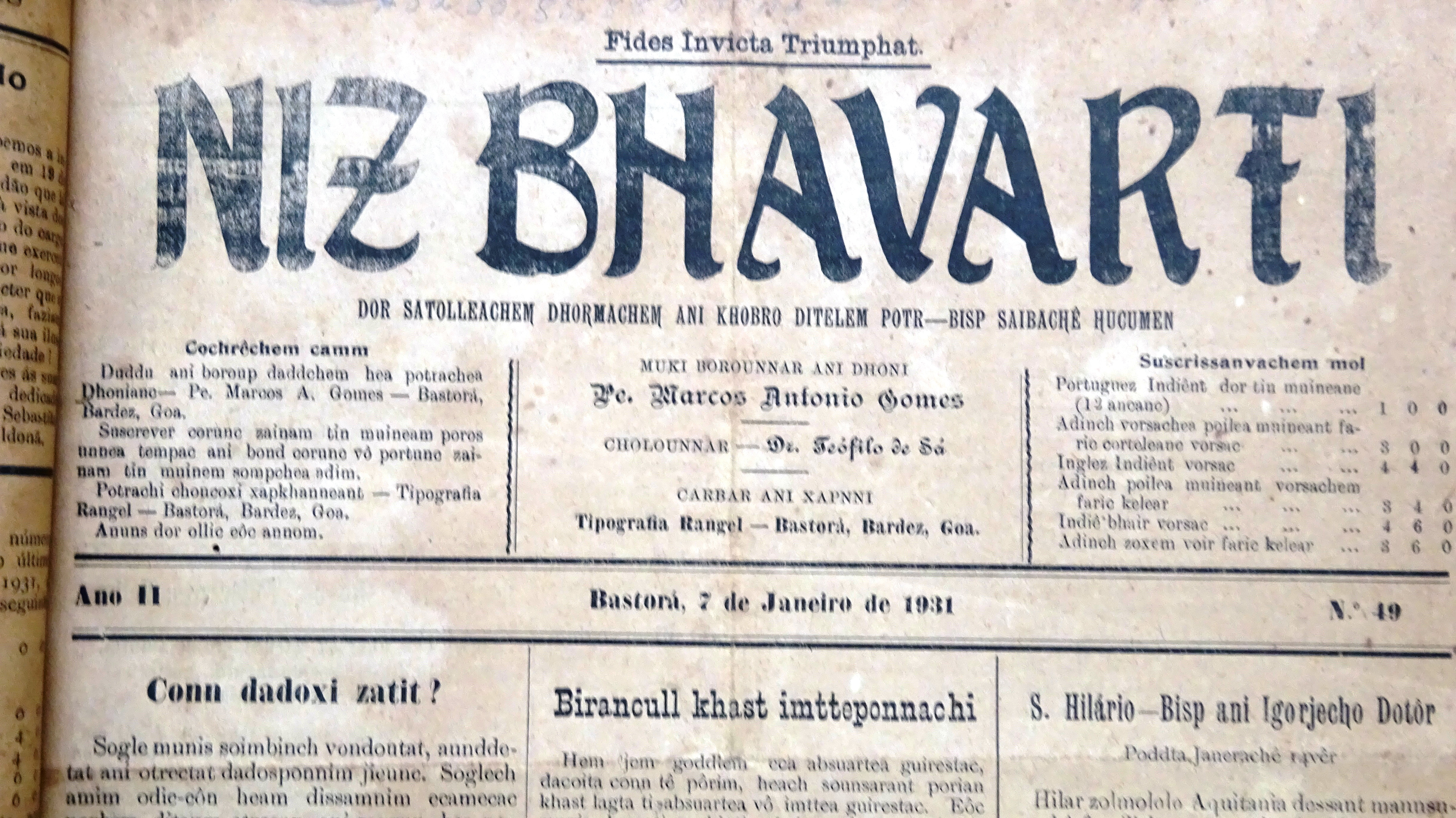 2. O Luso Concanim
An independent Konkani weekly in the Roman script, published from Bombay. An edition from 1893 shows a fanciful variety of content. Far away from Goa, the writers freely expressed their hostility to the colonial regime. “Sr. Cupertino de Andrade, a Goan, has been made a judge,” reports a correspondent on Goa. “This is right. Why should a Portuguese judge come here?” 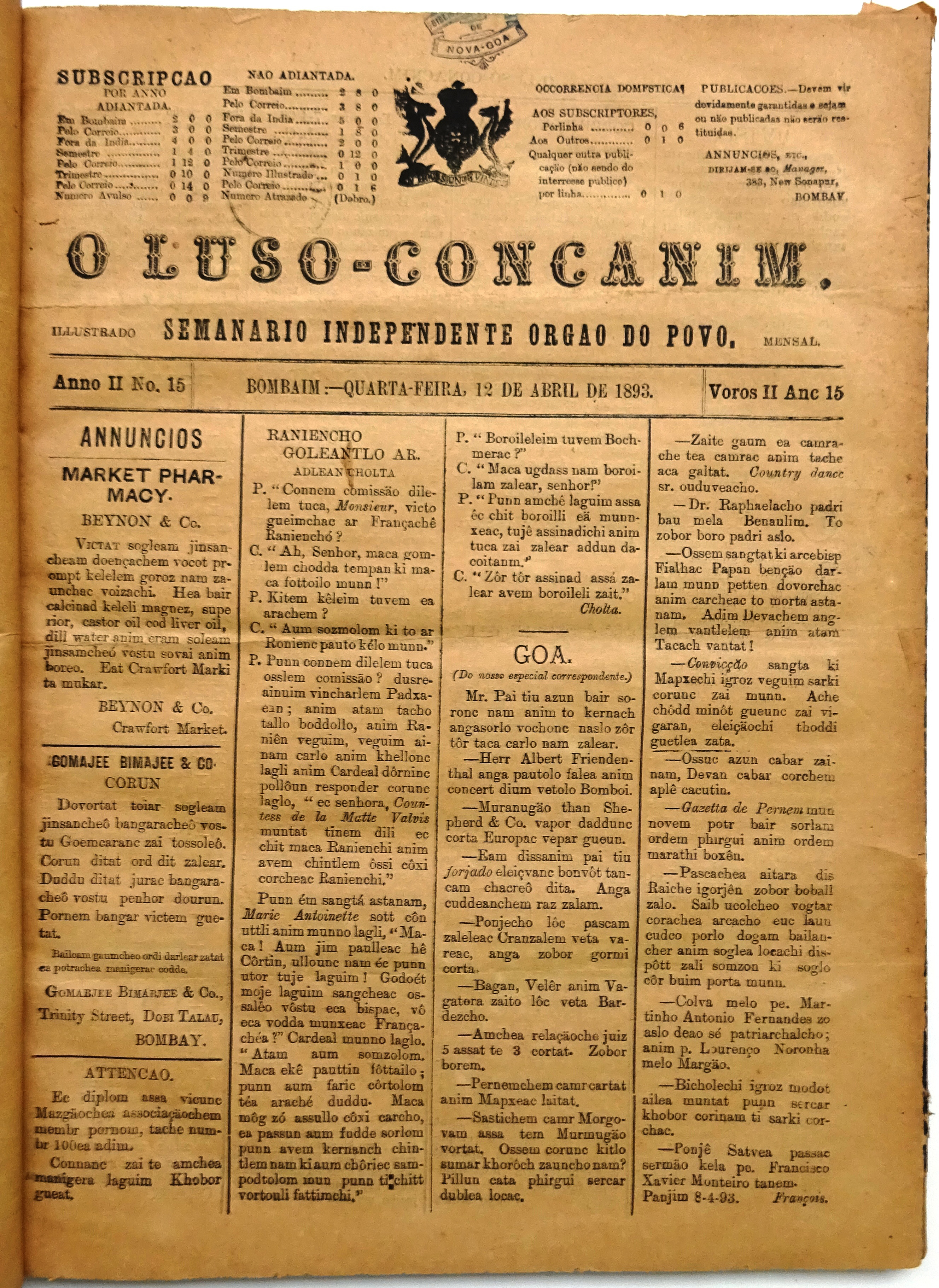 3. Vavraddeancho Ixtt (Friend of Workers)
The first copy of the Vavraddeancho Ixtt (O Amigo Dos Operários, in Portuguese) dated 20th December 1933 is available at the Library, in an extremely fragile condition. Fr. Arsenio Lucio Fernandes was the first editor and proprietor. 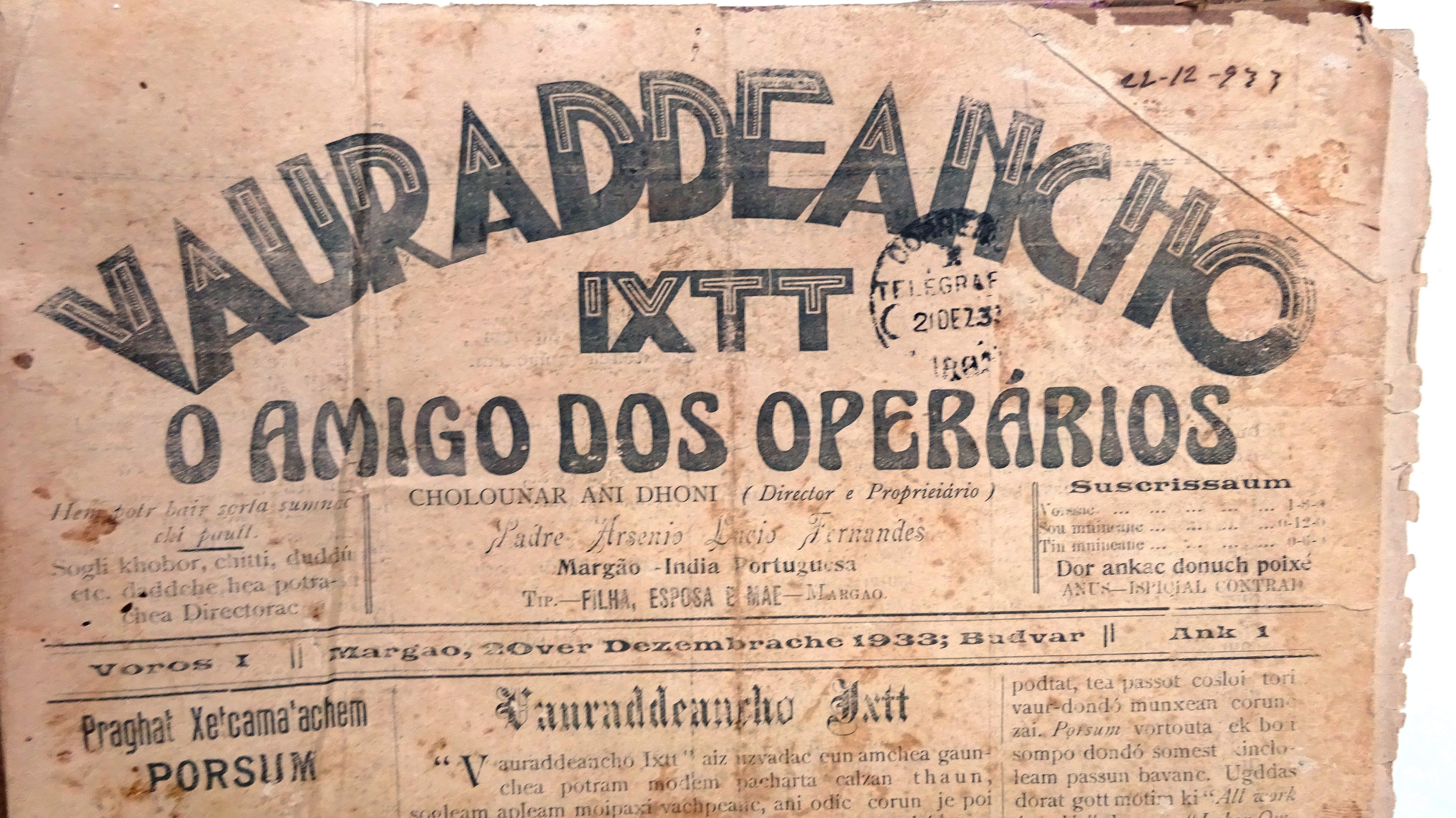 4. A Vanguarda – Fuddari
A 1955 copy of the A Vanguarda has a Konkani section titled Fuddari (Leader), with Prabhacar N. Tendulcar as its editor. A news item therein reports on new proposals for bridges and water supply in Goa. A poem ‘Xetcamti’ by John Serrao de Colva extols the virtues of the farmer. Another piece laments the indifference shown by English speaking Goans to the Konkani language.

5. Ave Maria
This was a ‘Catholic Concanim Fortnightly’, published from Bombay. A couple of letters to the Editor in a 1932 edition animatedly discuss the isssue of Goan girls working for Parsi and Muslim bosses in Bombay. A detailed account of monies received for the ‘St Anthony 7th Centenary’, totalling to about 554 rupees is published in the same edition.

6. Aitarachem Vachop (Sunday Reading)
A weekly published by the Salesians from Old Goa, sold at the princely sum of one anna (16 annas made a rupee). The owner was a Fr Vicente Scuderi, probably an Italian, while the editor (redactor) was Fr Alvaro Renato Mendes. A March 1949 issue covers the tribulations of St Peter on its front page. 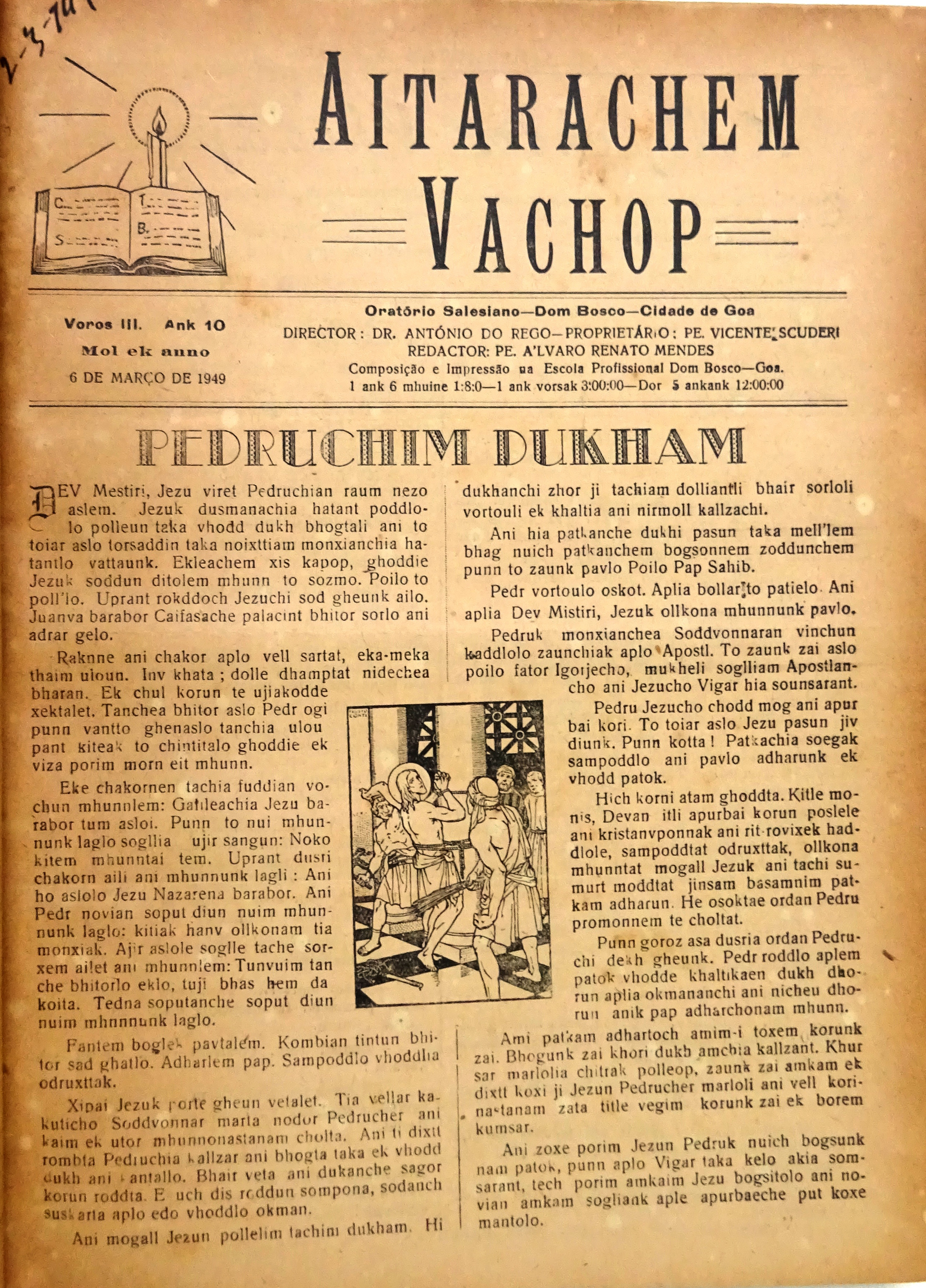 8. Konkani Daily News
Published by A.V.D’Cruz at the Ave Maria Press in Bombay, the paper proclaimed itself as ‘The First and Only Konkanni Daily in whole of India’! ‘Hitleracho Testament Sampoddlo Morna Adim’ says a headline, meaning that ‘a will written by Hitler, before his death, has been found’. A 9th January 1946 edition has as its front page headline: ‘Russia Has Made An Atom Bomb’. A kind of retraction follows a couple of days later, the 11th January front page news quotes a Swedish scientist as saying ‘Russia does not have the capacity to make an A-Bomb’.

9. Novem Goem (New Goa)
Novem Goem can be seen in three avatars in the Library archives. There’s the first issue of a quarterly version in the Devnagari script, edited by Kashinath Naik, priced at two annas. Then there’s the literary fortnightly, also in the Devnagari script, edited by Gurunath Kelekar, priced at 25 paise. And a ‘Konkani People’s Daily’ in the Roman script, sold at fifty paise.

These precious archives are being digitized by the diligent staff of the Library Lab, under the meticulous guidance of State Librarian Carlos Fernandes, who tells me that over 8000 pages have been scanned and stored digitally within the last year. This will certainly make sure that the early press initiatives of our Konkani forefathers will be immortalised forever, to inspire future generations to come.