Theatre enter mode: Okay, so Zero Dark Thirty is about the Osama Bin Laden takedown at Abbottabad, Pakistan. From the opening cinematography, one isn’t sure if this Kathryn Bigelow film is going to be a fictionalized account of the taking down of Osama or a Fahrenheit 9/11 style documentary. This is a film where you… END_OF_DOCUMENT_TOKEN_TO_BE_REPLACED

Theatre enter mode: Okay, so Zero Dark Thirty is about the Osama Bin Laden takedown at Abbottabad, Pakistan. From the opening cinematography, one isn’t sure if this Kathryn Bigelow film is going to be a fictionalized account of the taking down of Osama or a Fahrenheit 9/11 style documentary.

This is a film where you start out watching a blank screen for minutes, not seconds, with an accompanying audio montage of panicked air traffic from 9/11 – which, of course, was the beginning of the real-life drama as well. CIA operatives Dan Stanton (Jason Clarke) and Maya (Jessica Chastain) interrogate terrorist detainees at various CIA ‘Black Sites’ around Afghanistan and Pakistan. If you thought  ‘waterboarding’ was a complex torture technique, here it is upfront – a jug of water poured down the face of a detainee, taking him through the near death throes of drowning. ‘When you lie to me, I hurt you…Partial information will be treated as a lie…Everybody breaks, bro, it’s biology,’ quips Stanton as he works on a prisoner. Every operative knows that Abu Ghraib and Guantanamo-like abuses can bring bad press and disciplinary action, but that pales in comparison to the tremendous top-down pressure of finding the heads of Al Qaeda and Osama himself, casually referred to as UBL (after the alternative spelling Usama). 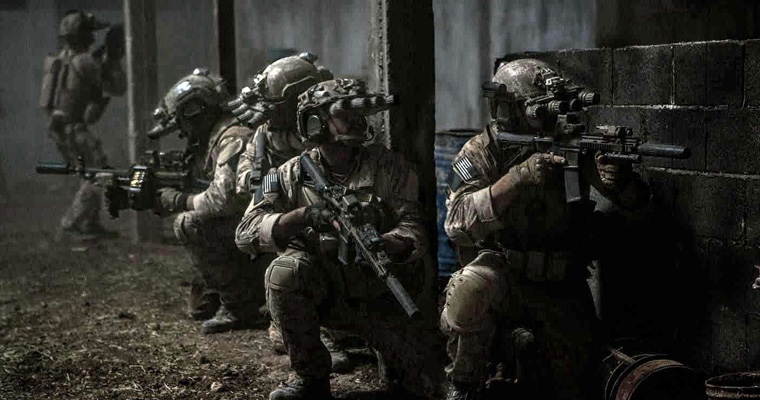 Stanton moves back to the US and Maya is left in charge of hunting down UBL, wading through the mass of data provided by countries wanting to help in the wake of 9/11, much of which is white noise.The hunt for UBL is akin to searching for a needle in a haystack and the CIA expends resources desperately – an informer is gifted a Lamborghini in exchange for a telephone number.  Maya focuses on Abu Ahmed, a shadowy figure apparently very close to UBL himself.  She becomes obsessed with the Abu Ahmed lead after another lead  – that of a doctor thought to be attending UBL – backfires , tragically killing operative Jessica (Jennifer Ehle) and others at Camp Chapman. It’s well known that the curious case of the house at Abbottabad was tracked down by the CIA through Usama’s courier, and Abu Ahmed is that man.

Tragedy marks time throughout the film, as explosions at the US Embassy and the Marriot Hotel in Islamabad and on a bus in London keep jolting you out of your seat. The CIA honchos rage with frustration at the lack of progress. “I want targets, bring me people to kill,” storms the Director. Maya is equally enraged at the insistence of her boss that she focus on local Al Qaeda cells in the US, when she wants to track down and kill UBL himself.

The pace of the film never wavers. Tense meetings at the Langley Headquarters are woven into ground action, and the cinematographic point of view is through American eyes throughout, which lends a documentary feel to Zero Dark Thirty. Why is the film called Zero Dark Thirty? That’s a military term for 30 minutes after midnight, and also a metaphor for the darkness and secrecy that shrouded this mission.

The hunt for the ghostly courier winds through the bustling markets of Peshawar. CIA eyes and ears are everywhere. A vendor at the market, a farmer squatting by the roadside smoking…spy eyes watch everywhere as the quest for Abu Ahmed (nom-de-guerre of Ibrahim Sayeed) intensifies. The film accelerates into the final assault, using ‘stealthy’Black Hawk choppers of which we all know, one of which crashed at zero dark thirty at Abbottabad. As the mildly gung-ho crew of the choppers take off from the forward base at Jalalabad, Maya  stands by, like an anxious Liv Tyler in Armageddon.

“Usama…Usama,” calls out a Navy Seal in a surreal and almost comical whisper as he closes in on the third-floor bedroom after controlled explosions open up doors in the sprawling UBL hideout.

You don’t feel like clapping or cheering when Usama is shot dead at the end of the film. This is a sombre film, shot with understated matter-of-factness. What emerges at the end is not any stellar performance by the crew or some epic win in the battle of good versus evil. What registers strongly is the baffling struggle that an all-powerful  government has to go through in the face of an invisible enemy. And how it is not always the hard facts and files that crack a case, but the speculation of a human mind that looks for hairline cracks and telltale signs. At the time of going in for the kill at Operation Neptune Spear, the National Security Advisor is offered only a 60% chance that the man hiding out at Abbottabad is actually Usama Bin Laden.

Maya is underplayed, Chastain delivers a rather muted performance. Dan Stanton, the torture pro at the opening of the film, is more natural and charismatic, though he takes a back seat for the rest of the story. “You like Bob Marley? I have some Libyan music if you like,” he offers a detainee who is about to be bombarded with nerve-breaking high decibel music. Kyle Chandler as the CIA’s Joseph Bradley is consistent and a burly James Gandolfini plays Leon Panetta, Director of the CIA. Kathryn Bigelow’s 2009 film The Hurt Locker won her the Academy award for Best Picture, also making her the first woman to win the award for Best Director.

Maya comes across as a CIA operative who is more ruthless and persistent than her colleagues, but what strikes home here is the concept that mind can hunt down mind. And that sometimes the head of the most powerful country in the world has to go in for a kill with huge political risk, based on a 60% chance. A chance that when taken brought in the bloodied body of the most significant terrorist mastermind of our time. Zero Dark Thirty, like the operation it portrays, ultimately succeeds.