Sheela Jaywant, a prolific writer of short stories tells Streets Editor José Lourenço of her writing saga and offers advice for budding writers. Where did you do your studies? I schooled at Bombay Scottish in Mumbai and did my college at St Xavier’s. I fell in love with Chandrashekar Jaywant, who was a fighter pilot… END_OF_DOCUMENT_TOKEN_TO_BE_REPLACED

Where did you do your studies?

I schooled at Bombay Scottish in Mumbai and did my college at St Xavier’s. I fell in love with Chandrashekar Jaywant, who was a fighter pilot then, and got married before the final exam of my Science degree! I did a correspondence course in writing, one of those frivolous courses. But the teacher there was very encouraging, every time I sent in a lesson answer, he would say – please send this for publication!

Researching for articles was quite tough those days. I would go to the University library and beg people to borrow books for me. I used to keep millions of news cuttings in those cheap files whose metal clips get eventually rusted and which begin to play host to all kinds of insects and little creatures.

How did your writing career develop in the early years?

When I first started sending articles to newspapers, I used to write under a pen name ‘YZ Prabhu’, those initials didn’t mean anything actually! I would type on my father-in-law’s baby Hermes typewriter and send off the middles, features and stories to periodicals. Finally BG Varghese, the then editor of Indian Express sent me a handwritten note – “Don’t use a pen name, use your real name.” After that I began to write as Sheela Jaywant.

My first story collection was titled ‘Quilted – Stories of Middle-Class India’, containing stories that had appeared in Savvy, Woman’s Era, Eve’s Weekly, etc. It was published in 2003 by a small publishing house – Hindon Publishers in Mumbai. They also published Melting Moments, a collection of middles published in Times of India, Indian Express, News Time and other papers, as well as my second volume of stories called ‘The Liftman and other stories’ in 2007.

In 2010 I had done some editing work for Himalayan Journal, and those editors recommended me to Woodstock School, the organisers of the The Third Mussoorie International Writers’ Festival at Mussoorie. I read out an original poem at that festival – ‘I sold my soul to a corporate goal’.

The series ‘Chicken Soup for the Indian Soul’ has around 15 of my stories in their six volumes. My story ‘Yoke Mates’ was among the winning entries in the 2012 Random House competition ‘She Writes’, for women writers in India. Two stories also appeared in Unisun’s anthologies Vanilla Desires and City of Gods.

I like Vikram Seth’s novels for his ideas. I also like Amitav Ghosh’s books. I read a lot of Marathi stories in the Diwali issues.

How did you benefit from being a member of Goawriters, the writing group?

At the Goawriters group meets in Panjim, I met people who thought like me. It was exciting to read what people were writing fresh, straight off the hot pan. I learned to see a story with a critical eye. I have a science background, I worked as a manager at Hinduja hospital, but GW taught me to say with pride that I am a writer.

The folks at Sasialit (South Asian Literature) guided me a lot. I joined that group through Caferati, a writers forum. I submit my stories to contests that I come across via email or other sources. I came to know of the contests of Random House, Unisun Publications and the Fundaçao Oriente contest in Goa 2012 through Goawriters. My story Symbiosis won the third place jointly with Ramnath Gawde’s Pisheak Peepal. 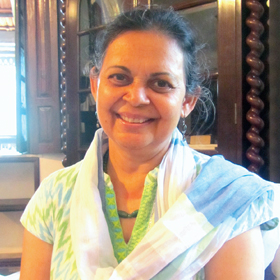 How do your stories come about? Where do you get your ideas from?

My stories are always about what someone else has experienced or told me. I store these little anecdotes away and they emerge in my stories. I edit my stories as I write. I don’t make drafts, I just write the final thing.

I don’t give my stories to family or friends for criticism. I put them up on forums online to anonymous readers, like toastedcheese.com. They are experts who read and offer feedback. They don’t know my gender or whether I am Chinese or Eskimo. When someone says I have written a good story, I can’t tell you how much it thrills me, that’s my charas. Writing gives me a high.

If I can describe someone eating or digging his nose, why not about lovemaking?  I am trained as a zoologist, after all! Perhaps in past decades I may have been shocked by erotica. Sometimes people walk into the boutique where I now work, wearing skimpy clothes, I don’t react to that. But we must wear appropriate clothes for the location and situation, of course.

What advice would you give new writers?

Those people who live without any creative activity, their lives become desolate. They don’t have an overall perception of what’s going on. If your child doesn’t do well in studies, you mustn’t go into depression; you must give him an alternate course. Often you can’t do it because you yourself don’t do creative work. A child should have physical activity like sports as well as academic and creative activity.

For budding writers, I would say, please hold a day job and do writing as a very serious hobby. You need time to read extensively; without reading you cannot write. How will you get ideas? How will you improve your language? Be disciplined, don’t give up halfway through a story, finish what you start. Get your story critiqued by good critics who don’t know you, don’t just ask your next door neighbour. Don’t feel bad if the critics tell you it’s not a good story. Work on it and make it better.