Please don’t die, but if there were a chocolate to die for, this would be it!

Please don’t die,  but if there were a chocolate to die for,  this would be it!

I believe firmly in the healing powers of chocolate. Heartache, depression and disappointments seem a bit easier to digest with a solid injection of chocolate. One of my favourite forms of absorption is chocolate mousse.

Unfortunately, it is very difficult to find fresh cream in Goa – a basic component of a proper chocolate mousse. Another difficulty with the traditional recipe is the use of fresh eggs, which can be dangerous in this tropical climate.

In my quest for good living, I discovered Heston Blumenthal’s recipe for Chocolate Chantilly. (Heston is a huge deal in the culinary world – if you don’t believe me, Google him!) This recipe is a fine example of molecular gastronomy, a branch of cooking which is quite alien to me. However, the simplicity of the recipe convinced me. The trick is a temperature shock for the melted chocolate combined with constant whipping.

A word of caution: with this recipe, a lot can go wrong. My first attempt ended in disaster with chocolate drops all over the counter, the walls and myself. My second attempt went so well, that I am happy to share it with you. I use less liquid than Heston and I have replaced the water in his recipe with a mixture of coconut milk and coffee.

Heston advises to use only best quality chocolate. Living on a budget, I have used normal dark cooking chocolate. Its taste does not compare to my favourite Lindt chocolate with 70 percent cocoa. Adding coffee, however, masks the lack of depth of flavour sufficiently for my humble taste.

The original recipe deals with 200 grams of chocolate. This amount seemed ridiculously small considering my two chocoholics in the house. When I go to all the trouble of making Chocolate Chantilly, I want an amount that does not vanish in one go (remember, Heston is used to serving haute cuisine with its attendant parakeet portions). For this reason I have used 500 grams, which gives you around eight decent servings.

To make this recipe work, you need a large amount of ice. I filled a stainless steel bowl with about 1.5 litres of water and stuck it in my freezer overnight. Before melting the chocolate, I dropped the ice into a bigger bowl and added another litre of water. I kept this in the fridge until needed.

Cut the chocolate into small pieces. This is easily done when the chocolate is at room temperature. Place the chocolate into a pot and add the coconut milk, the vanilla essence and the coffee. Now put this pot into a bigger pot with some water in it. The water should just about touch the bottom of the smaller pot. Switch on the fire and melt the chocolate, stirring occasionally.

When the chocolate has melted, switch off the fire. Take out your bowl with the ice water from the fridge, pour the melted chocolate into a mixing bowl and place this bowl into the ice water. Now is the time to constantly whisk this mixture. If you don’t want a serious workout for your arm muscles, take an electric hand mixer. After a few minutes, the chocolate mix should start to thicken. When you have reached the consistency of a creamy mousse, you are done. This should not take longer than ten minutes and your mousse should look like the picture here. 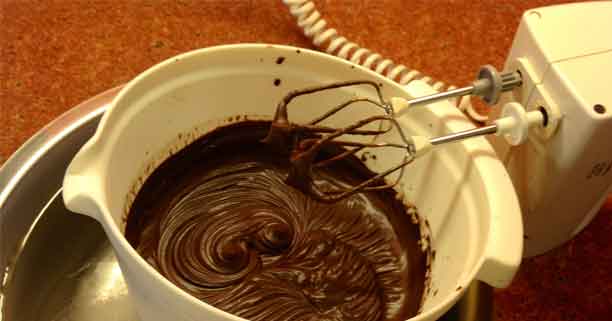 If it did not work, try again. Maybe you have added too much liquid. Heston and other chefs use at least as much liquid as chocolate. I did this in my first try, but it turned out far too much liquid.

You can read about the benefits of cocoa here: http://www.mediterraneancooking.in/nutritional-values/surprise-surprise-cacao-is-healthy < 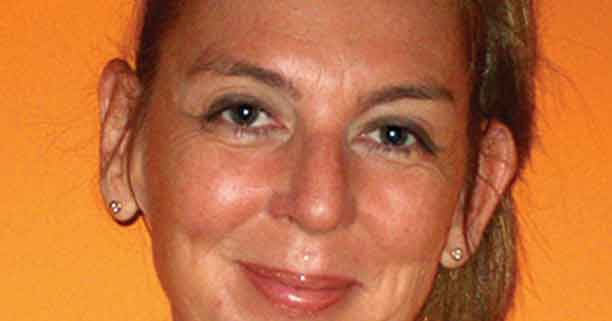 After riding through India on an Enfield Bullet, Kornelia Santoro settled in Goa with her Italian husband, saying good-bye to her career as a political journalist in Bavaria. Now she writes about her experiences in the kitchen, managing a website, www.mediterraneancooking.in, and a blog, www.korneliaskitchen.blogspot.in. She has published two award-winning cookbooks, Kornelia’s Kitchen – Mediterranean Cooking for India and Kornelia’s Kitchen 2 – Cooking for Allergies.