Sure, store film festivals are all about great films, capsule and film-stars on red carpets, and the press having a heyday clicking and writing about stars, most of whom hardly anyone had heard of till they showed up at the festival! But what happens when you’re done clicking selfies with the who’s-who of the world of cinema, and your weary eyes can’t take any more films in for the day? A ton of other things, apparently! IFFI 2015 has brought with it its first ever pop-up bookstore, an art exhibition, funky sculptures, a photography exhibition, a DVD store, a Mutimedia exhibition and an awesome IFFI daily – ‘The Peacock’.

The Prints and The Paper

“The Prints and The Paper,” which has made its first-ever appearance at IFFI, is nestled comfortably in a corner of the Old GMC building. Leonard and Queenie Fernandes, who brought the bookstore to IFFI, have on display a collection of rare books on film, writing on Goa by Goans, and books in Konkani that aren’t easily available elsewhere. Among their treasures sit two lovely visual companions to ‘The Hobbit’ with beautiful photographs from the film-series, and with an introduction by Sir Ian McKellen. (He played Gandalf, by the way, but if that’s not enough to explain how awesome the book is, I’m not trying harder because someone, ahem, is saving up to buy the book herself and wants to make sure a copy is left.) Casting Director Nancy Bishop, whose experience includes ‘Mission Impossible: Ghost Protocol’, and ‘The Chronicles of Narnia: Prince Caspian’ also stopped by at ‘The Prints and The Paper’ to sign her second book ‘Auditioning for Film and TV.’

The One School Goa teamed up with the Entertainment Society of Goa for IFFI this year. The photography students at ‘One School’ have been assigned different roles at IFFI – some of them are shooting the actors, some of them the over-priced food, other are covering other interesting aspects of IFFI. They’ve also put on display some of their previous work from around Goa, alongside the aisles at one of the entrances to INOX. Delegates can chill and appreciate the photographs that have been shot under four categories: Faces of Goa, Colours of Goa, Backwaters of Goa, and Goa in the Rains.

Sonia Rodrigues Sabharwal’s art exhibition “Amchem Sobit Ddaiz” (Our Glorious Heritage) is on display at the Maquinez Palace. Full of well-coordinated colours, the exhibition which explores the roots of Goan culture, is a visually pleasing and relaxing break for delegates who have had their fill of movies. (Although, it seems that it isn’t possible to find such a delegate. They gobble-up films faster than The Flash can circle the Earth.) 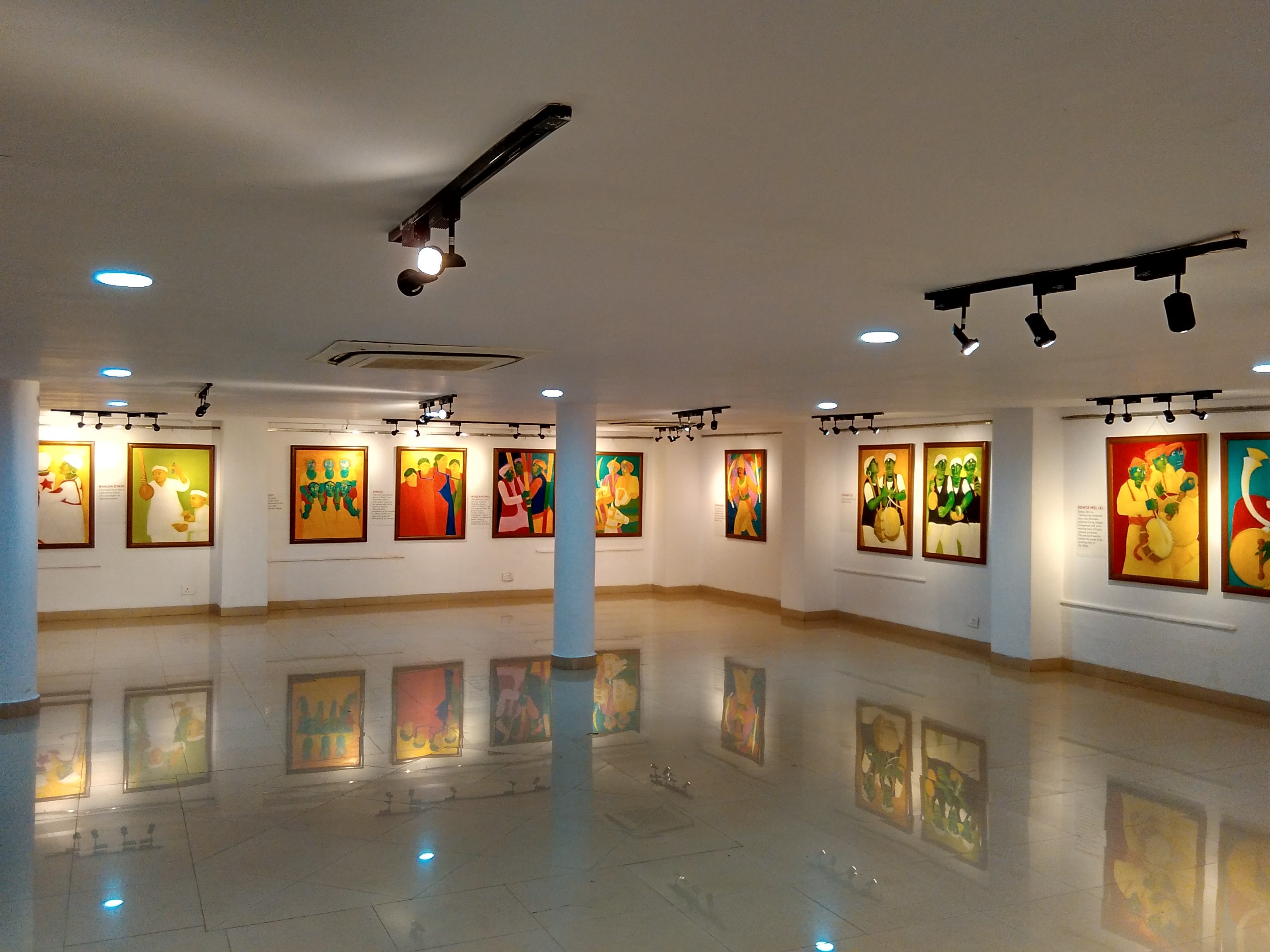 Yes, we’re talking of Subodh Kerkar. He’s managed to make people ponder over sculpture even at a film festival. Right beside the photography exhibition is a conspicuous green Moai head with a bright pink bubblegum popping out from between its lips. A little further at the INOX campus is a “Katreacho Pao” – the unique four cornered Goan bread that Goans love to eat with bhaji. The sculptures at IFFI are meant to whet people’s appetite in sculpture and art, and direct them towards the Museum of Goa in Pilerne. MOG is the largest private art space in the country, so it would be worth anyone’s while to take time out to visit “Gopakapattnam” – the exhibition currently on display at MOG. 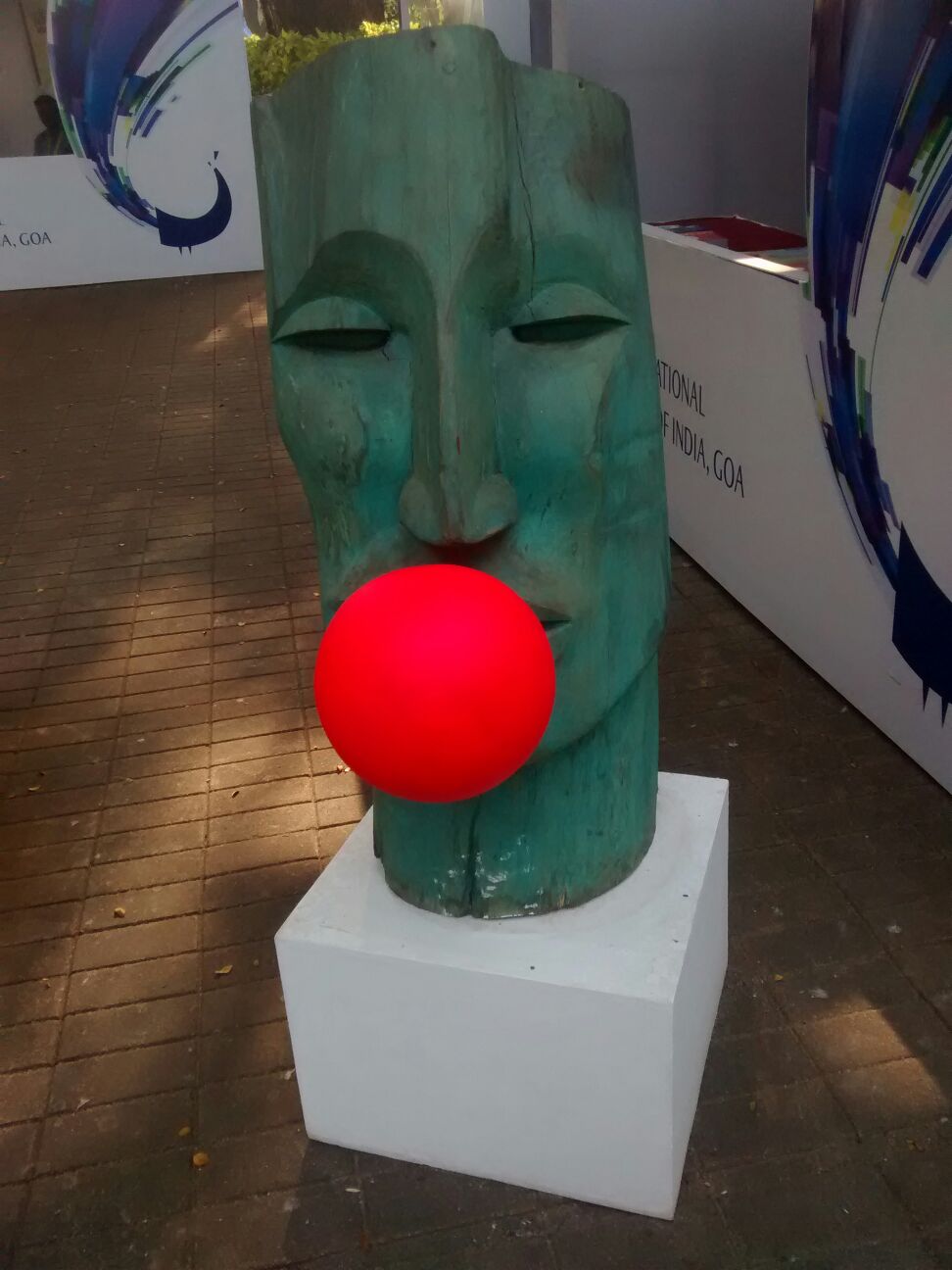 The Multimedia Exhibition and DVD outlet

The multimedia exhibition gives delegates the chance to see posters of restored Indian film classics, and listen to some tunes of Indian cinema of the days of yore. The restoration of these posters is an initiative by the National Film Heritage Mission of the Government of India. At the DVD outlet, cinephiles can lay their hands on documentaries and biopics, as well as vintage movies. It’s run by the Films Division of India.

But the main highlight of IFFI 2015 (other than the films, of course) would have to be ‘The Peacock’. An IFFI daily bulletin (not to be confused with the rival bulletin which calls itself “IFFI Daily”) is the brainchild of ESG CEO Ameya Abhyankar and Vivek Menezes. ‘The Peacock’ has carried exclusive interviews with directors, actors, and opinions of delegates, as well as some really colourful pics from around the festival. Kedar Dhondu, whose work is currently on display at MOG, does an exclusive painting for the cover of ‘The Peacock’ everyday. Sadly, the lifespan of ‘The Peacock’ is only as long as the lifespan of IFFI. By the way, ‘The Peacock’ has also carried some great pieces by Goa’s much loved film critic Sachin Chatte, and Streets’ own Jose Lourenco and Amol Kamat have been part of the vibrant ‘Peacock’ team.

Okay, so for those Goans who refuse to make delegate passes at IFFI, that concludes an inside view of “What the hell goes on within the damn INOX campus during IFFI.” That’s right: awesomeness.