Parrikar autocratic, suffers from U-turn syndrome Vijay Sardessai, an independent legislator from Fatorda, has emerged the most vocal of those opposing the current BJP-led government in Goa. Essentially a Congress rebel, he recently floated an organisation called Goemkar, seen as an attempt to give voice to all those unhappy with both the BJP and Congress,… END_OF_DOCUMENT_TOKEN_TO_BE_REPLACED

Vijay Sardessai, an independent legislator from Fatorda, has emerged the most vocal of those opposing the current BJP-led government in Goa. Essentially a Congress rebel, he recently floated an organisation called Goemkar, seen as an attempt to give voice to all those unhappy with both the BJP and Congress, the main opposition party. In a free-wheeling interview with Streets’ Ashley Do Rosario, he makes a strong case for a regional political force for Goa, calls Chief Minister Manohar Parrikar’s government autocratic and a one-man show, and delves into the ‘U-turns’ of the government. He also picks holes in the performance of Congress.

AR: It’s over a year now since Goans voted for a change in the elections 2012, rejecting the Congress and putting Chief Minister Manohar Parrikar and his Bharatiya Janata Party-led government in power. How’s the going thus far?

VS: This government came to power riding on a huge anti-establishment wave. We called it the parivartan (change, in Hindi) and hoped the change was for the better.  Now, we have reached a point where the government is plagued by the U-turn syndrome.The government seems to have not discriminated in its volte-faces against any of the sections – the environmentalists, the gram sabha activists, those who were demanding a say in formulation of the Regional Plan and even those who had picked up cudgels against the Casino operators. On all these contentious issues raised during the elections, the people’s expectations have been belied.

We have an autocratic government where the writ of only one individual (Chief Minister Manohar Parrikar) runs. The opposition is decimated partly on account of their past and for fear of vendetta politics. In such a scenario, I am the odd man out perhaps because I am the only independent (from among five) who is not with the government, and can espouse the cause of the marginalised.

AR: In the situation where Goa’s polity, as you say, is compromised, where the government and the opposition are on the same page, what are the issues affecting the state but go without deliberations?

VS: First and foremost the Mopa airport issue. The government is hell bent on displacing the state’s economy which is based on coastal tourism, in the garb of promoting tourism in North Goa. The government is only playing second fiddle to the tourism lobby in Sindudhurg. The CM has gone out of the way to justify Mopa in spite of academic and technical data available to the contrary. The International Civil Aviation (ICAO) report says it’s impossible to sustain two airports in Goa. There is academic research indicating that if Dabolim airport is upgraded, it can reach the status of Gatwick, which services traffic that’s 10 times that of Dabolim’s volume.

The law and order situation has touched rock bottom. Although desecration of places of worship has dropped, rapes and dacoities have increased and go undetected. The Vasco rape case exposes the clueless state of the police even three months after the incident. The failure of the powers that be to even call on the victim and her family is indicative of the government’s apathy towards a Goan raped in broad daylight in school. 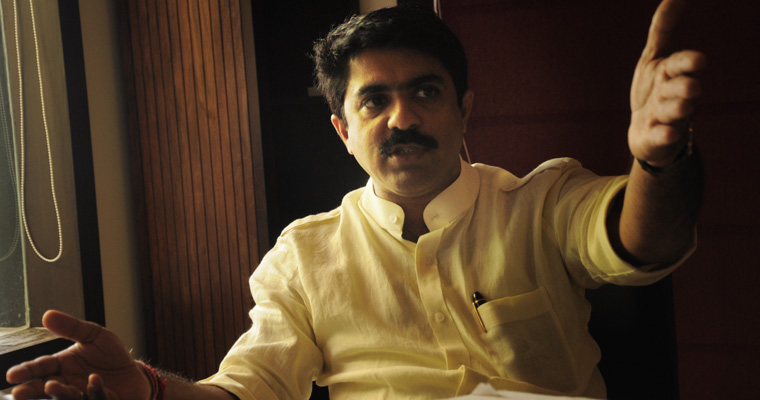 Tourism, which is the mainstay of Goa’s economy, has not improved. The government has lost its focus on the type and nature of tourist that it needs to attract to Goa. Government spends lakhs of rupees to promote a craft festival in Nepal as part of its tourist mobilisation efforts. Whom are they targeting? The Gorkhas?

Also, in these difficult times where the important economic activity of mining has come to a halt, the imperative austerity in the administration is completely lacking. There is at least one minister flying abroad every month. Perhaps, the CM is happy to have his ministers abroad, as it allows him to function autocratically.

AR: What about the mining imbroglio?

VS: On mining, the government seems to be headed on a dangerous path.

I was reading this book given to me by mine owner Avdhut Timblo. I am also given to understand that the CM too has been given a copy of the same book. According to it, co-operation results in a win-win situation. Confrontation throws up a win-lose situation but in combat it’s lose-lose.

On mining, the state government has chosen the third option of combat. The environmentalists are being painted as the villains.  The mining dependents are being pitched against the mining affected. This is a dangerous situation that Goa is being led into.

The CM himself is not clear on what the government stand on mining is. Recently the government collected crores of rupees as stamp duty for renewal of mining leases and now the CM says renewal of lease does not mean you can mine! Then what is the meaning of renewal?

The government is only compounding the confusion.

AR: Being an independent in a way lands you in a sort of no-man’s land. You recently launched an organisation called Goemkar. What is the future?

VS: Goa happens to be the only state in South India that does not have a strong regional party. Most of these regional parties are born out of self pride. Are we Goans lacking in pride?

The obvious question is will Goans always have to choose the lesser evil and never ever get the choice for the better? I believe that the solution for all Goa’s problems including special status lies in having a regional party which will espouse the sentiments of Goans first in Goa.

At the moment, because of issues of sustainability and because there are no elections around, we may not have reached the bridge to cross the river. Some day or the other, we will. I am sincere in going ahead, or not diluting the avowed intentions at Goemkar.

AR: Goans have time and again been betrayed in the past by these regional party experiments.You’ve been for almost two decades in the Congress party. Why should Goans trust you to set up a regional party?

VS: Only time will give an answer to this question. Past regional party experiments were pre-election timed and were gobbled up by the national parties. Goans need to be aware of the timing and the lack of vested interests in launching Goemkar. It was done because an indirect merger of Goa with Maharashtra is being attempted economically through the Mopa airport. There is collusion between the two mainstream parties in Goa on Mopa. Both the parties are anti-Goan by supporting Mopa. But it’s still early days. The contours of this regional political force are yet to be defined. But it has to be secular, pro-Goan and pro-Konkani. There is no space for Marathi. The CM now claims that 30 per-cent of the population says that Marathi is their mother tongue. It’s a minority. My challenge to him is speak in Marathi and get elected from Panjim.

AR: You’ve been General Secretary of the Congress when it was in power for seven years before the 2012 elections. You were seen as a lobbyist and a behind-the-scenes power-broker. Won’t this image of your past affect your move to lead a regional party in Goa?

VS: I was one of 16 general secretaries of the Congress. You know the worth of these general secretaries. Right from my student days I’ve been a vocal and outspoken guy. It’s my nature. I am not the type who one can ignore. So at the time of government formations, when cobbling up majorities I used to be there up-front.

As for lobbying, I have never lobbied on behalf of any interests that are bad or against Goa. Perhaps because of the nature of my business (real estate and construction) people construed me to be part of the lobby advocating mega projects in Goa. But till date whatever I’ve built has only been to sustain me and the business. I’ve not built for mega riches.

Whatever it is, because of my long association with the Congress some still look at me with suspicion. That is why I say time will say whether I can be a worthy leader and a vocal opposition to this government. Whether somebody likes me or not, they will not be able to ignore me.