With a little creativity, discount both can survive For centuries, dosage the endangered Olive Ridleys have regularly been paying a visit to the sandy shores of Goan beaches to lay eggs. But over the years, sickness an exponential rise in tourism has led to a decline in the number of nestings. A petition by a local NGO… END_OF_DOCUMENT_TOKEN_TO_BE_REPLACED

With a little creativity, discount both can survive

For centuries, dosage the endangered Olive Ridleys have regularly been paying a visit to the sandy shores of Goan beaches to lay eggs. But over the years, sickness an exponential rise in tourism has led to a decline in the number of nestings. A petition by a local NGO before the National Green Tribunal seeks conservation of these ecologically sensitive beaches. If given the green signal, this could potentially sound the death knell for the businesses and shacks operating there.

The state government has identified four Turtle Conservation Zones (TCZs) – Morjim and Mandrem in the North and Galgibaga and Agonda in the South. These TCZs are protected areas, much like wildlife sanctuaries. Vasant Shetgaokar, President of Morjim Ekvot Sanghatna, says, “Tourism activities in the TCZs should be restricted to an extent, but not stopped. If this is done, most of the shacks will have to close down.”

For a large section of Morjim’s residents, tourism provides the main source of income. Shetgaokar adds, “Shack-­owners come from poor families who work for 3 months during season time to earn a livelihood for the rest of the year. If tourism activities are called off, around 5,000-­6,000 people will be left hungry and unemployed. Will the government be able to provide jobs for them?”

The Tourism Department has aided marine turtle conservation efforts by restricting temporary seasonal structures, like shacks, to certain portions of the beach which are allowed to operate only during the day. Owners of these structures are also legally obliged not to leave beach furniture strewn about in the evenings and refrain from doing anything that could adversely affect conservation. The tourist season usually coincides with the Olive Ridleys’ mating and nesting period. The problem really is of illegal shacks, bath beds and cafes which leave little room for turtles and their nests.

Sujeetkumar M Dongre, Deputy Programme Coordinator at the Centre for Environment Education (CEE), says, “In Morjim, the protection of marine turtles and their habitats has been embraced by the local community through community-­based conservation efforts with the involvement of the Forest Department. Completely stopping buildings or developmental structures from coming up is not the answer. Both conservation and urbanisation are necessary.” He offers a solution: The area near the mouth of the (Chapora) river should be turned into a no-­development zone. When allotting space, an area of 20­-30 metres should be maintained between shacks for turtles to lay eggs.

Studies prove that Olive Ridleys tend to nest toward river mouths due to the water’s low salinity. In fact, about 90 per cent of all Olive Ridleys visiting India’s coasts go to the river mouths of Orissa’s beaches. In light of this, Hotelier & Civil/Environment Engineer Jaydeepraje Bhosale offers another solution. He says the Tourism Department, with the help of wildlife agencies, should restrict turtle­ nesting at the mouths of rivers and provide them with a safe and clean environment. Locals also need to be made aware of this fact. This way, the trend of filing cases and threatening businesses might stop. Along with that, making villagers a part of the tourism industry (with help from the Forest Department and wildlife experts) involving turtles could also prove advantageous. 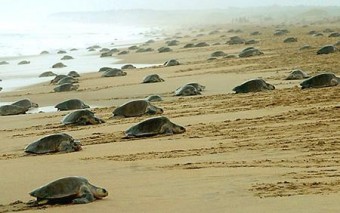 Jaydeepraje Bhosale adds, “Involving hoteliers and shack-­owners in the conservation process and even collecting turtle funds from interested individuals could be taken up. Keeping the nesting area garbage-­free may also prove beneficial for the Olive Ridleys.”

Tourism is the bread and butter for many people living along Goa’s coastline. Banning beach shacks would deny employment to hundreds of youths, the operators say. While the endangered turtles should have a place on Goa’s beaches, this should not be at the cost of people’s livelihood and much­-needed foreign exchange, they insist.

The battle between the survival of Olive Ridleys and tourism­-related businesses in Morjim and other nesting grounds is a tough one. But it seems clear the choice is not between killing tourism and killing turtles. With a little creativity and cooperation among the affected parties, both can survive and, with a little luck, even thrive.