Celebrating a birthday in Style It is said that of all the human senses, medicine olfactory is the most evocative – the one that stirs emotions, triggers memories and transforms your mood. So when you walk into The Verandah and catch a whiff of the seafood and meats cooking over an oversized charcoal grill, the… END_OF_DOCUMENT_TOKEN_TO_BE_REPLACED

Celebrating a birthday in Style

It is said that of all the human senses, medicine olfactory is the most evocative – the one that stirs emotions, triggers memories and transforms your mood. So when you walk into The Verandah and catch a whiff of the seafood and meats cooking over an oversized charcoal grill, the open kitchen and breathtaking view of the Bambolim bay somehow take a backseat to what’s happening with your nostrils. The scene is set by the aroma.

And with that, a culinary journey commences.

Before we continue, let’s take care of a bit of housekeeping. Streets policy in reviewing restaurants is to do so anonymously and pay the bill. In the interest of full disclosure, on the evening we dined at The Verandah, the staff did in fact know we were there. So while we did pay the bill, we were not there anonymously. And this evening, the truth is we came not just to eat – but to celebrate the 76th birthday of Marisha’s father. We openly admit that we are partial to The Verandah. Out of Goa’s thousands of restaurants, we chose to celebrate here, which says something about our opinion of the place! We also admit that on this night we got some special pampering. 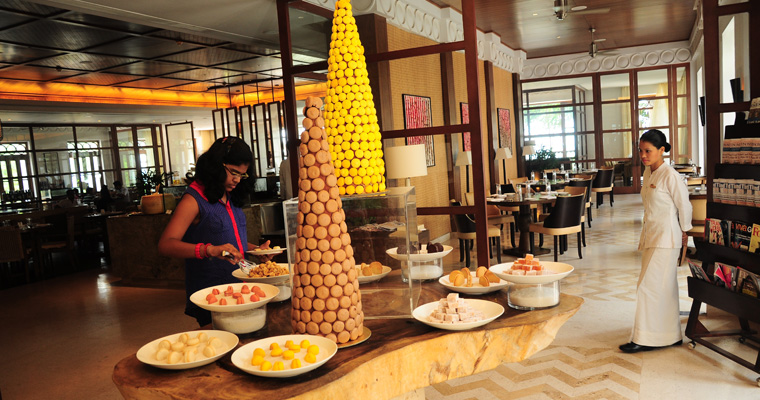 The Dining Room restaurant at the Grand Hyatt

We were greeted by the Grand Hyatt’s gregarious Executive Chef Shane O’Neill and the hotel’s Assistant Director of Food & Beverage, Oliver Viegas. And before the staff served us what we wanted to eat, they gave us a sampling of what they thought we should eat: Asparagus & Cheddar Melt on Crostini, and Tomato & Basil Bruschetta with Parmesan Shaving. It didn’t take long to understand why Shane and his crew felt we had to have it. The dishes were crunchy, tangy and delicate.

Next came the appetizers that we actually ordered: Gorgonzola Salad with Poached Pear and Caramelized Walnut; Goat Cheese Salad on Cucumber and Beetroot with Walnut, Tomato and Pear Chutney; Crab Cakes with Chili Aioli; and Sauteed Tiger Prawns in Lemon Caper and Garlic Butter. This is the first food review we have written as a couple, which in itself is a dangerous thing given the immense scope for disagreement. So far, however, the going is easy as, somewhat miraculously, the two of us reached the same verdict on the appetizers: The best offering was the gorgonzola salad with the crab cakes being a very, very close second. 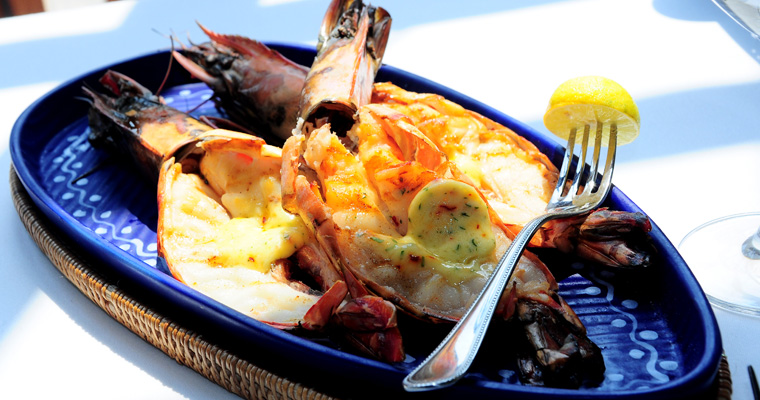 We’re not sure we qualify 100 percent, but we like to think of ourselves as foodies. Between the two of us, we have lived in the following places: Phoenix, Kolkata, Los Angeles, Assam, New York, Singapore, Jakarta, Bogota, Jerusalem, Caracas, Atlanta and Goa. We have visited dozens of other countries and in each of them spent much of our time in search of the perfect meal. We love to cook and entertain and, for us, flavour matters.

The same holds true for The Verandah.

Take the main course, for instance. Marisha’s dad Gautam ordered the Red Snapper Grilled in Banana Leaf with Tomato Sambal after our on-the-ball waitress, Ashwini, warned that his first choice, the Sea Bass, might not be to his liking as its flavour was somewhat sour. We were so busy eating everything else on the table that we neglected to sample Gautam’s red snapper, though the look on his face revealed satisfaction. The dishes we did sample include: Grilled King Prawns with Lemon Chilli Butter; Braised New Zealand Lamb Shank with Cumin, Fig and Harisa Sauce; Surf and Turf with Spinach and Chargrilled Nebraska Ribeye. We do not know exactly where they find prawns this big, but suffice to say they are huge – a nod to The Verandah’s stated promise of “serving primarily fresh market produce of vegetables, seafood and meat.” The Nebraska Ribeye was outstanding, served exactly as ordered: medium rare. The lamb shank was as tasty as it was tender, and the surf and turf – consisting of prawn and steak – held its own nicely amid all the other creations. Incredibly, the two of us agreed on the main course as well. Best among the very good dishes was the Nebraska Ribeye.

Finally, when all was said and eaten, the birthday cake arrived. We sang in honour of Gautam, our family’s fun-loving patriarch, and gobbled down the dark chocolate dessert, its crumbs lingering on the lips of Gautam’s three grandchildren. The cake was on the house, and, like everything else that night, extremely satisfying.

The Ambience: Elegant and understated, with an open kitchen and a view of the Bambolim Bay