An Extraordinary Natural Treasure Is In Danger

An Extraordinary Natural Treasure Is In Danger

The vast marine world has fascinated and baffled humankind since the dawn of time. And there’s much about it we don’t know. One thing that’s not in doubt, however, is its importance to our survival. Coral reefs are among the most exotic spectacles of the seas.  Chances are you’ve heard of the Great Barrier Reef, and perhaps the beautiful reefs found along the coast of Maldives, Philippines, Thailand and India’s Andaman Islands. But did you know a thriving coral reef is found in our own Goan sea scape?

Unfortunately, Goa’s coral reef – like much of the rest of the state’s natural patrimony – is now in danger. Beer bottles, garbage, wayward anchors and careless tourism are taking a toll on this most precious of natural resources, though comprehensive data on the state of our reef are not currently available.

Grande Island and Bat Island are two popular areas where coral reefs are found. Grande Island is a privately owned Island, three nautical miles from Sinquerim, and has now become the hub for Scuba Diving in Goa. It hosts six diving schools and about 40 island picnic boats operating every day. Bat Island, owned by the navy, gets less attention because of more difficult access.

The reef around Grande Island is known as a fringing reef (one of three main types of coral reefs, the other two being barrier and atolls) and is found all around the island. On the reef you see majestic corals, which could easily be mistaken for flowers or plants but are actually considered to be animals. The corals resemble the biological structure of animals, and have a defined mouth and specific bodily functions. They grow in vast numbers, work in unison and keep the balance of the sea. The corals feed on the water and absorb the nutrients from it, while fish use them for food and protection. 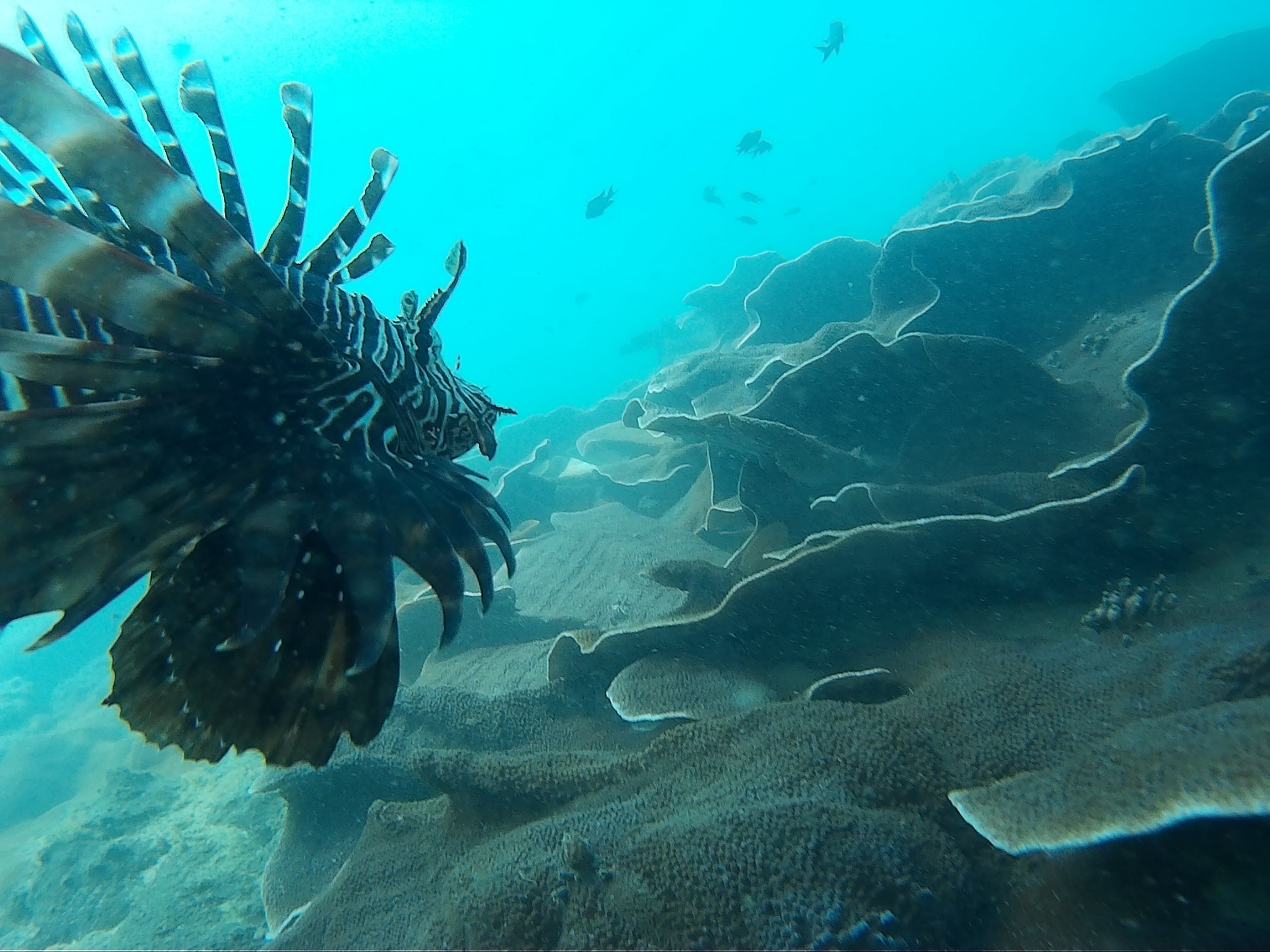 The corals in Goa are in shallow water and are dependent on sunlight to survive. The average depth for corals around Grande Island is 20-25 feet.  The corals are divided into categories of hard and soft. The main ones found here are called Table corals, Sea Whip corals, and Brain corals.

“They work as a housing complex for the life around them,” says Puja Mitra, Programme Manager of WWF Goa, pointing to a display on her computer.  “They provide food, shelter and protection to the fishes around them. Here you can see a Honeycomb Moray eel is using it as shelter and hiding behind it to get protection, and damsel fish hanging around for food.”

Roshan Gonsalves, a professional dive instructor from Dive Goa, explains what you see around the reef. “You see all kinds of fishes there. Snappers, Butterfly fish, Angel fish, Parrot fish, Cuttlefish, Damsel fish, Groupers, Goat fish, Flatworms, Trigger fish to name a few. Also, these are all directly dependent on the corals for survival.”

These creatures of the sea don’t just sound exotic, but are very important in keeping the balance of sea life. They are part of a beautiful eco system which mirrors their biological adaptability and intelligence. The male Cuttlefish, for example, can change colours on two different sides of its body and pretend to be the other gender. On one side it shows masculine patterns to attract a potential female mate and on the other side feminine to show other males that it is not a threat. It also shape-shifts and camouflages to protect itself from predators. 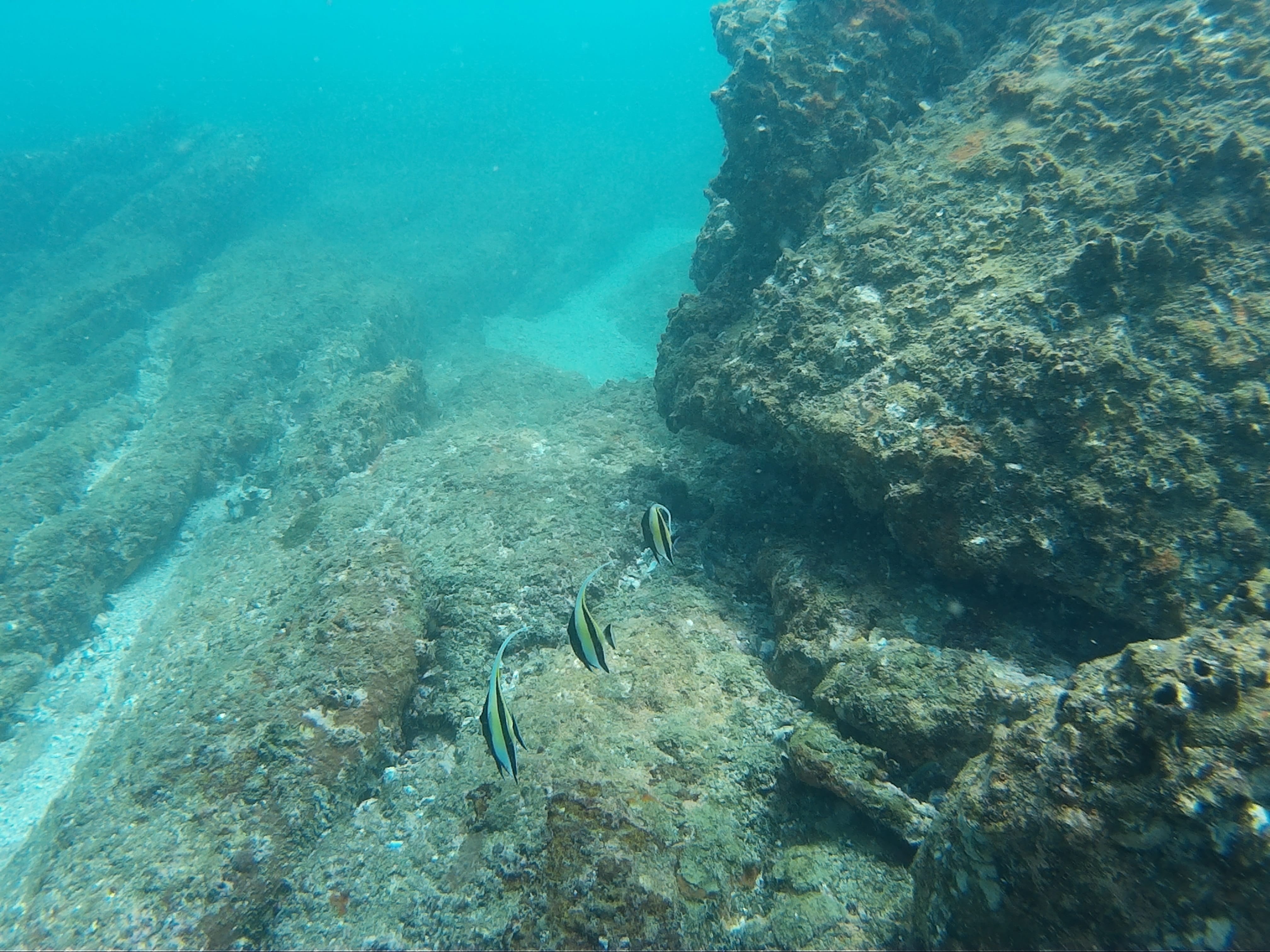 Other fishes like groupers (which only grow up as females till sexual maturity) and parrot fish also possess extraordinary biological attributes, including an ability to change genders.

Explains Roshan, “It’s amazing that Goa has a coral reef. We are very lucky. When I take a dive, I see how amazing it is that the life there is so inter-connected and together.”

But there is sadness in his discourse. He says the current situation around the reef is “not very good” and is very “unfortunate”.  Boat operators providing picnic trips to Grande Island are overwhelming in numbers, and the nature of these trips is dubious, with tourists who have little respect for delicate balances of nature. Beer bottles and cans are found in huge numbers on Grande Island as well as in the sea, causing disturbance to the corals. Two of the major issues hurting coral life are garbage and boat anchors. There’s no place to hook an anchor on the island, so they’re generally dropped in the water, at times causing breakage to the corals.

Michael, a boat operator who runs picnic trips from North Goa, admitted that he “is weak in corals” and knows very little about them. He acknowledged that there’s “absolutely nothing” at the moment offered to operators like him to help protect the corals, and says he drops his anchors randomly. 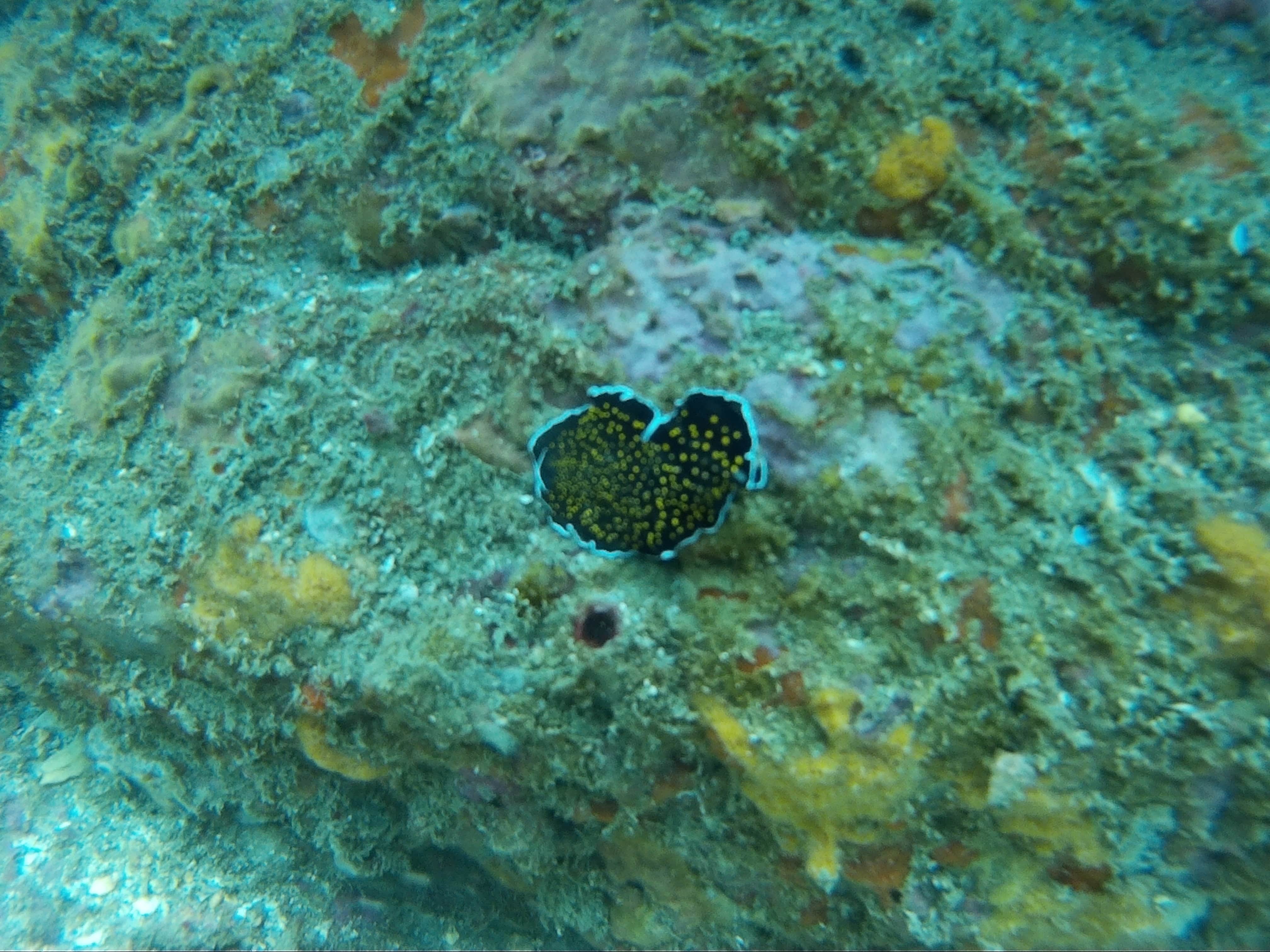 The coral reef can provide Goa an opportunity to deliver a new segment for tourism. “The coral reef in Goa is still fairly under researched as not too many people know about it,” explains Puja of WWF. “Just because it’s not the Taj Mahal of coral reefs doesn’t mean it’s not ecologically important. It takes millennia for coral reef to form and equal time for it to recover from breakage. The problem here is also that the tourism around the corals is not regulated at present. ” She added, “Tourism can be one way to generate awareness and interest in marine ecosystems which are not normally something we think about as it’s not visible to us. Good sustainable models and practices of marine tourism can be adopted from different parts of the world. There are basic rules to be followed and implemented which can solve a lot of problems.”

Just 0.1 % of the earth’s surface is occupied by coral reefs, although they support 25% of all marine life.  The ocean is vast and barren in many parts, and many creatures are indebted to the coral reef for acting as the ‘rainforests of the sea’.

The ecosystems of the world’s oceans would go haywire if coral reefs vanished.  Fifty percent of all oxygen on earth is due to the ocean, and hence the oceans’ well-being affects us all.

“Goa can take the lead in pioneering sustainable marine tourism and raise awareness about marine conservation, which will help protect the reef and its dependent livelihoods in the long term,” says Puja.

It’s not just for the fish, but for all of us. 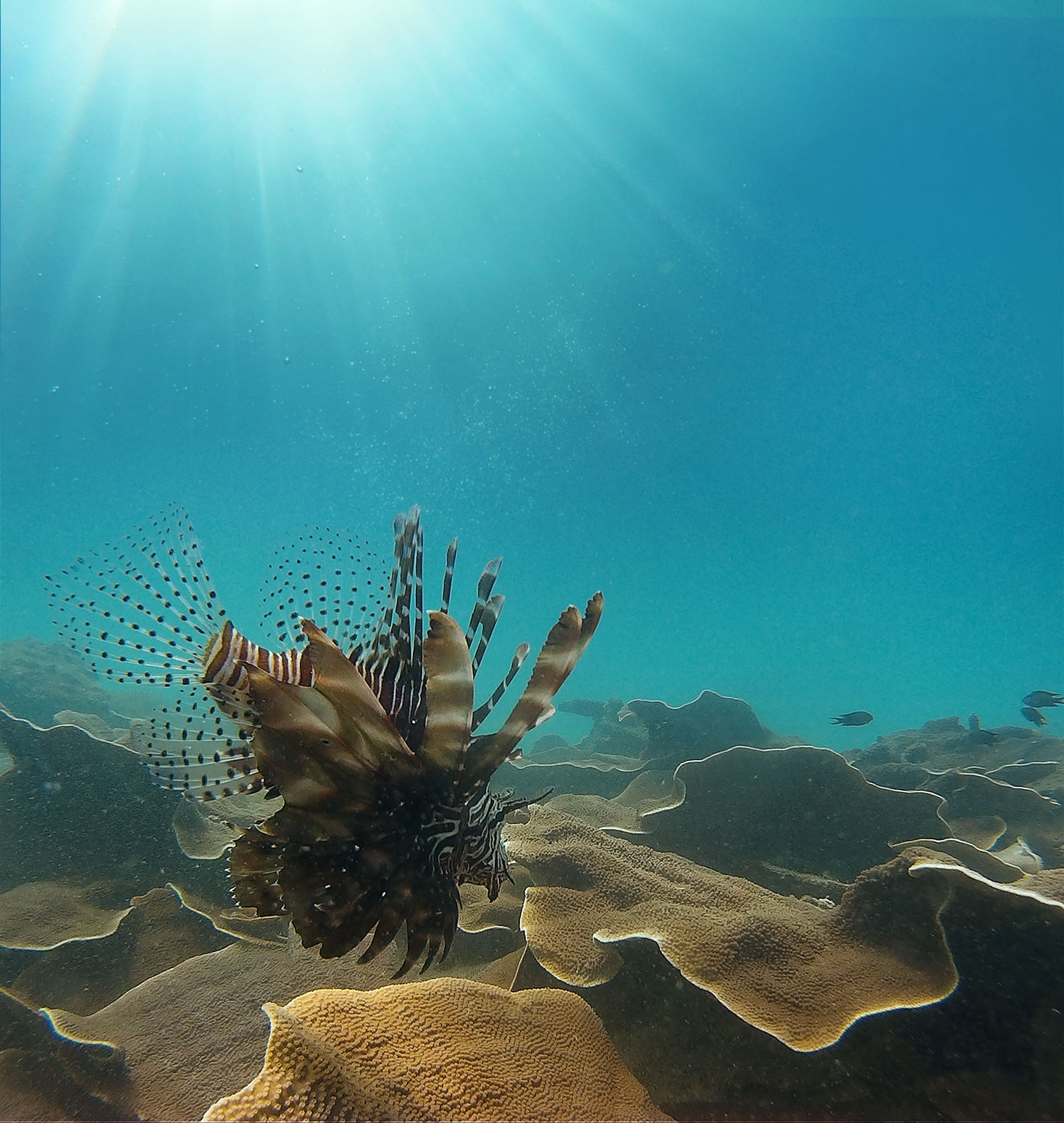 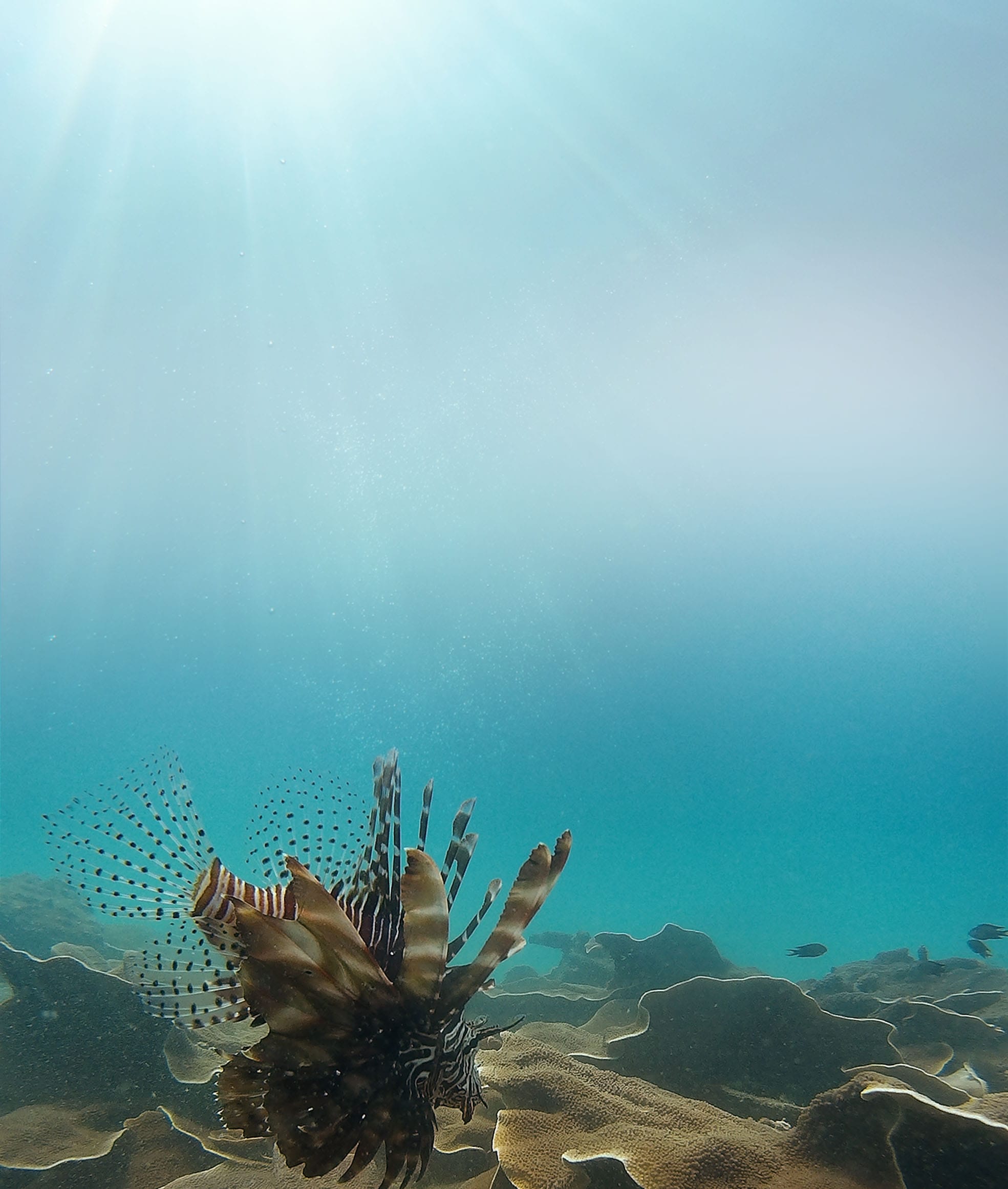 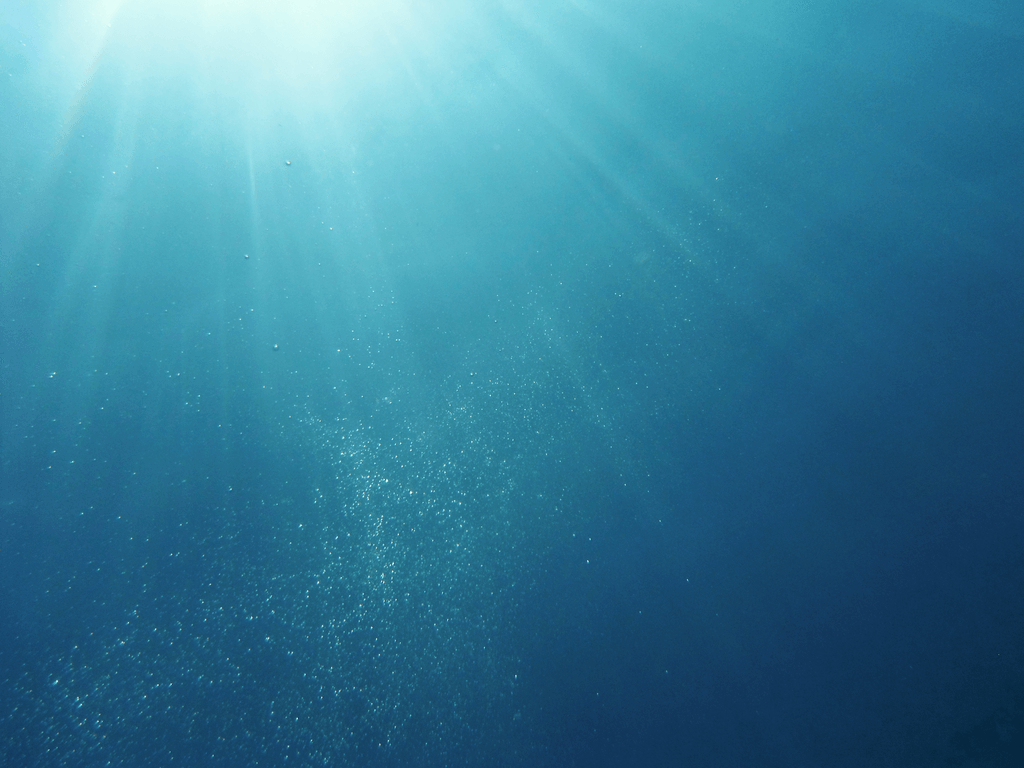