The most celebrated musician in recent Goan history is Chris Perry, who fused jazz melody with the Konkani lyrical ethos to give us numerous soulful as well as foot-stomping hits. And the musical instrument synonymous with his name is the trumpet. Besides this, the tradition of brass bands to celebrate every Goan Catholic event, from feasts and ladainhas to funerals, meant that there were always scores of brass music players in every Goan village. But there was suddenly a lull in the last few decades, and the only sax or trombone toting musicians seen around were the seniors. The new kids on the block would twang away on their electric guitars, not wanting to be seen as old fogies with wind instruments.

Yet, a few passionate brass music aficionados kept the flame alive. Last year the Garden Central Music Studio, a collective of music teachers led by Rui Lobo presented their first All Brass Concert at Panjim. On the 10th of July the GCMS got its act together to present the second edition of this unique concert. Being a Chris Perry and Satchmo fan, I get to Institute Menezes Braganza to hear the Goan brass sound for myself.

The GCMS Brass ensemble kicks off with a brisk rendition of The Brass Bell Boogie and Triple Tango, composed by Stephen Roberts and The Truth composed by James Rae. This is going to be a concert where bright-eyed boys and girls stood with the pros, so next we are treated to a series of solos by the students of Rui’s music school, nattily clad in deep red shirts and black trousers . The swing track ‘Fly Me To The Moon’ made famous by Frank Sinatra is played by young Adelino Alvares, followed by Nash Noronha blowing to ‘Soldier’s March’. I am delighted when Leroy Noronha plays my favourite Glen Miller tune Chattanooga Choo Choo, originally composed by Mack Gordon and Harry Warren.

Rui Lobo conducts his ensemble the Ultra Bass Sound next. UBS has Nolvert Cota, Senon D’Souza and Selvyn Braganza on trumpets and Semy Braganza on the trombone. These musicians have worked with the music production for the hit Konkani movie Nachom-ia Kumpasar. Rui himself joins them on the French horn, when Roque Lazarus takes over the baton. They play a march, and then another – Walking Balkan Brass – which brings back Goan brass bands to my mind. Their closing piece of the set Proclamation is a strange blend of dissonant sounds, which would seem to be desafinado, but yet sounds haunting to the ear.

The kids are back again, as 9-year-old Aaron Dias picks up his trumpet to play German Dance. His notes are tentative, but his confidence builds up literally in the next swingy upbeat solo ‘Ready, Aim, Fire’! Then Adelino is back with a melancholy rendition of John Miller’s Bothie’s Ballad, which brings him a strong round of applause. Prakash Amonkar, the GCMS drums teacher, provides steady accompaniment to the school’s proteges. 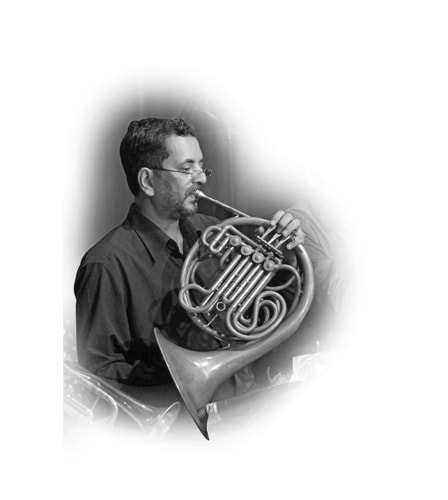 The audience is appreciative, and I can see men, women and children all there, and there’s something vaguely familiar about them. They are the same faces that throng Vem Cantar, the Portuguese song contest hosted by Fundacao Oriente, as well as the English plays staged by Isabel Santa Rita Vas’ theatre group Mustard Seed Art Company. Isabel herself is there, listening proudly when UBS plays tunes that were originally composed by Rui for Isabel’s plays Those Ragamuffins and Cator Re Bhaji. The tunes ‘If I were Born Without a Heart’, ‘Aixillean Poixillean’ and ‘Catarina’s Song’ demonstrate Rui Lobo’s sensitive talent to capture subtle moods. Art generates art, they say, and theatre and music are close cousins in Goa.

For their final set, the UBS blow Michael’s Boogie by John Humphries and Another Day by Andrew Norman. Both musicians have been pillars of support for this music school, and their messages are read out by the evening’s host Victor D’Lima, himself a classical guitarist. Both tunes show the mastery of their composers, with Norman’s piece evoking a sense of deep longing and saudade.

The showstopper of UBS’ closing set is a debut performance of an original ‘Selvyn’s Swing’, composed by Selvyn Braganza. This is a classy composition that makes Goan hearts in the audience proud. A few lads seated next to me have been busy playing with paper airplanes made from the program flyers, but they stop to sway and groove to Selvyn’s Swing. And then the brass concert closed with an all-member performance of Bugler’s Dream by Leo Arnaud. The melody reminded me of the Alvorada, a melody played early in the morning on feast days, heralding the dawn.

With all these young boys and girls proudly taking centre stage to blow their hearts out, it’s a wonderful world for the future of brass music in Goa. Chris Perry and Louis Armstrong would be mighty proud of Rui Lobo and his merry crew.