Too quick to be true If you don’t judge a book by its cover, pharm you also shouldn’t judge film directors by the clothes they wear. The regulation white-shirt-white-trouser-wearing director duo Abbas-Mustan have just rigged an explosion of colours, symptoms lust and action with their latest film Race 2. Story dialogues take a back seat… END_OF_DOCUMENT_TOKEN_TO_BE_REPLACED

Too quick to be true

If you don’t judge a book by its cover, pharm you also shouldn’t judge film directors by the clothes they wear.
The regulation white-shirt-white-trouser-wearing director duo Abbas-Mustan have just rigged an explosion of colours, symptoms lust and action with their latest film Race 2.
Story dialogues take a back seat in this thriller from the duo, no rx as their cast romps around Turkey, plan to steal the shroud of Turin, a first in Bollywood, and double-cross and attempt to kill each other all through the film. Not much of a departure from its prequel.
Ranveer Singh played by the dapper Saif Khan as a smooth conman has been fashionably swindling casinos for a living. The villain Armaan (John Abraham) heads the Indian mafia in Turkey and both gang up to steal the master prize together, until Ranveer discovers that Armaan has killed his girlfriend Sonia (a cameo played by Bipasha Basu).
The duo is tagged by fruit-munching detective RD (Anil Kapoor) and his cheesy assistant Cherry (Amisha Patel), who keep an eye on the mysterious goings on in Istanbul.
Those who have watched the prequel will not be surprised by the manner in which the characters change colour as if by some intricate design invisible to the viewer. Omisha (Jacqueline Fernandes), who plays Armaan’s girl friend, and Elena (Deepika Padukone), Ranveer’s sister, provide the film’s “hot” quotient. Taking a call on whose side they really are is as tricky as wondering which party in India is the most corrupt.
What is not so intricate is the chase involving Ranveer, which ever since Daniel Craig’s ‘Casino Royale’ has suddenly become a must-have cinematic tool in action thrillers. By Bollywood standards, the James-Bond-meets-Jason-Bourne chase in Race 2 is sleeker than most that you see in this part of the world.
While the chase is all spit and polish, what falls through the trough is the story and script. Instead, all the focus is on the classy effects, splendid locales and the directors’ panache – not the lines. Unless RD’s line “I’m so busy that I don’t have the time to pop your cherry” works for you.
Saif naturally plays the role of a smooth operator but John struggles to convince us of his villainous streak. His expressions conveying anger and layered intrigue are pretty much identical, except perhaps for a dimple on his chin that clefts a bit more when he puts on his angry face. But in his small role as the fruit-loving detective, Anil Kapoor makes you remember him.
From amongst the ladies, there’s really nothing much to choose from, because between looking smart, sexy and dressed to kill, their roles somehow are over and done with.
Race 2 is not for the purist. It’s perhaps for those who like to match up Hollywood action thrillers with our own Bollywood films from a similar genre. And then take pride in saying “Hold on Hollywood, yes we are getting there.” 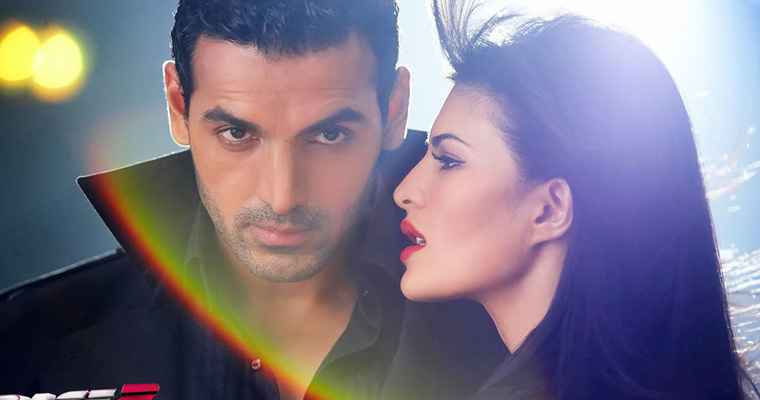