Abeer Hoque is a Nigerian-born Bangladeshi American writer and photographer. Her first book of fiction, drug The Lovers and the Leavers, shop 2011, pill is a collection of linked stories, photographs, and poems. Her memoir Olive Witch, about growing up in Nigeria, the US and Bangladesh, will be published in 2016. She’s also working on a novel ‘Memory Alone’, and a collection of travel themed erotic short stories ‘F Is for Fire’. Streets met up with her at the Goa Arts & Literature Festival last weekend.
P- How do you look at photographs and poetry?
A-My photographs became more structured and arty after 2001. They live beyond language, they are connective. They can be shared with street children. A photograph might just freeze the surface of something. You can’t always do that with poetry. The chapter ‘Repeat After Me’ in my book of poems and photos ‘The Long Way Home’ focuses on pattern and detail, which I find to be as evocative of transformation and belonging as the traditional portrait setting. The chapter ‘This Is a Window’ traces lifestyle through the lens of architectural elements.

P-How did your journey as a writer begin?

A-It’s been a long road. I wrote for 15 years before I got published. In the summer of 2005, armed with a one way ticket to Bangkok, I left San Francisco to go travelling for a year, which turned into seven. I spent two years on and off, in Bangladesh and India, funded in part by a Fulbright Scholarship. I researched and wrote my novel The Lovers and the Leavers, published by Bengal Lights Books in 2014 and Harper Collins India in 2015. The rest of the five nomad years, my pitch perfect if penniless gypsy life took me to over 30 countries on five continents. 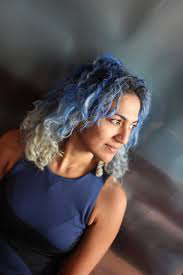 P- Was the book the Long Way Home pre-planned?
A-I love cities as much as the wild and empty places. They display elements of decay and anachronism, that rot that can sometimes lead to re-growth, sometimes to ruin. I knew halfway through my gypsying that I was going to make a book, though it took a while to figure out what it would look like.

P-Do photographs inspire the compositions of poems, or is it vice versa?
A- I am interested in unfamiliar and intimate angles of the known by zooming in or shooting in low light. I don’t want so much to remove place from the equation, but re-imagine it. I look up my photo collection, which inspire poems. But, I would like to do it the other way round.

P- Do you use Photoshop?
A- No. I believe a good photographer is one whose first click captures the image.