Make Goa the new Cannes Born and brought up in New Delhi by parents who were Partition refugees, 59-year-old film producer and media strategist Kalyan Mukherjee has spent 18 hard-working years producing films. He is the Establishing Partner & Director of KAS Moviemakers, a well-known Bengali writer & author of four novels. In an exclusive… END_OF_DOCUMENT_TOKEN_TO_BE_REPLACED

Born and brought up in New Delhi by parents who were Partition refugees, 59-year-old film producer and media strategist Kalyan Mukherjee has spent 18 hard-working years producing films. He is the Establishing Partner & Director of KAS Moviemakers, a well-known Bengali writer & author of four novels. In an exclusive conversation with journalist Jonathan Rodrigues, he talks about the scope of a film city in Goa, the trade of writing and the essence of preserving the culture and spirit of Goa.

JR: Does Goa have the capacity and infrastructure for a film city? Could it be a new source of generating revenue for the state after the mining ban?

KM: Firstly, plundering resources is not the way to create wealth. I really congratulate the Chief Minister on his stand on this issue; any backtracking on this will amount to seedy compromise of some kind.

Secondly, if Cannes is the model, then Goa does not have the infrastructure yet; I think Goa should spend money on becoming the premier exhibition city for films in India. It’s a Cannes requirement that only films which are to premier there are acceptable; Goa can follow this. It is not stars, but films that make a festival. Revenue cannot be calculated only on ticket sales but also on the number of room-nights, transport and flight tickets. There should be a way of tracking this and then seeing the figures that emerge.

JR: Goans often get upset about Bollywood’s projection of its culture and people. Do you feel there should be a line drawn between creativity and sensitivity or do you feel there is a need for a change in mentality, where Goans open up to art and cinema?

KM: Films are made by directors. I feel that new directors have no connect with literature. Many cannot even write in their own language. What this means is the content in those films spins from their heads alone; they have no access to the large body of regional literature. Don’t forget that almost all of the films made by Satyajit Ray were based on Bengali novels. People are not stupid; they can smell garbage even if it’s washed in French perfume. A lot of what we see now is plain soulless garbage. So don’t blame the viewers, but the directors. I am not saying all is bad, but that’s the trend.

JR: You must have have taken many daring escapades (both national and international) in your career, be it journalism or filmmaking. Have you ever faced death threats or had a near-death encounter?

KM: I was a journalist for ten years, I mean just a reporter really. But in those days, there were no cellphones or computers. So it was a lot of work. I fondly remember my escapades in the dreaded Chambal Valley of northern Madhya Pradesh in 1982. We were three of us, when we went to cover the bandit gangs led by Malkhan Singh and Phoolan Devi. What started as reporter stuff led to their surrender and we negotiated with then Chief Minister Arjun Singh.

I have never faced death threats. I don’t think Indian reporters die in dozens like in the West primarily because we don’t do war reporting, which clearly is calling for death. But I think India can get dangerous if you try reporting on politicians and their corruption or, for instance, the real-estate mafias. Inspirationally, once a reporter; always a reporter! The smell of news never really leaves you. 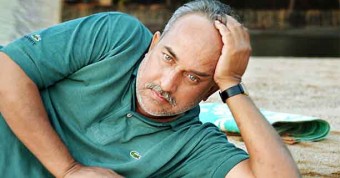 JR: There is talent among mass media students in Goan colleges; some have even tried their hand at ad jingles and documentaries. Who are the people you would advise them to follow, refer to and read about?

KM: Just live and experience life. Read and read. Che Guevara told his daughter on her birthday that he had a gift for her. But where was the gift? Che said, ‘Go and read in the library; that is your gift’. Mass media and film school don’t prepare you for the real thing. All you need is to start writing, start trying to get published. Get your names in newspapers or on the screen. Suddenly you will feel the power, the power that you matter and that people are watching. I think journalists should look and study accounts, get to the money matters of a story, and check the trails of money. For filmmakers, it is simple: Watch films.

JR: As a filmmaker and journalist, do you live the challenges of each day as they come or are you someone who is anxiously obsessed planning for the future?

KM: I live one day at a time… I see life as God’s gift. One must work or else life can lose meaning. The question is whether to work for money or for pleasure. I think one must really quickly remove the work-for-money goal and go for pleasure. I am now ready for pleasure.

JR: How do you see Goa from the eyes of a Dilliwala?

KM: I like Goa because it gave us Dom Moraes, the poet and FN Souza, the artist. Why aren’t statues in their name in the heart of Panjim? Why no Dom Moraes poetry festival or an exhibition of Souza?

Goans are forgetting their past, I really dislike this. They are no longer proud, but seeking and grubby, always wanting to run away from Goa. I see a lot of ugly buildings around, the loss of art and beauty.  Last week, I attended the new plan for the Panjim makeover. The debate was on development, not one person talked about beauty. Will Panjim and the rest of Goa become a soulless version of the West and its models? We cannot follow China which has rubbed off its past in the name of progress. The model cannot be Singapore or Shanghai. It has to be Goa first and Goa last. It means Goans have to decide what they are not prepared to lose in order to move forward.