Hailed as the father of new wave cinema in Hong Kong, Wong Kar Wai (WKW) is nevertheless not shy about appearing sentimental or even corny.  His themes are free spirited like an infusion of fresh air and the style dreamy romantic with a luxurious feeling of colour.  True, sildenafil the women are usually off kilter but the films look classy and appeal to the trendy viewers who gobble them up.

One of Wong’s skills lies in giving the audience a sense of real time by focusing on a dormant scene.  He’s known to have a dislike for rehearsals and sometimes spends years in editing.  The tender ‘In the Mood for Love’ and ‘Chungking Express’ which deal with trying to understand the distance between people, are touted as two of the most romantic films of our time.

Despite being a departure from his usual style, ‘The Grandmaster’ received worldwide acclaim upon its release last year and put this mega talented director back in the spotlight.  The movie is based on the life story of the Wing Chun grandmaster Ip man, who was a remarkable martial artist and became posthumously famous as one of Bruce Lee’s teachers.  It stars WKW’s favourite actor Tong Leung and the luminous Zhang Zyi and is minus the special effects of ‘Crouching Tiger and Hidden Dragon’. Instead, it has a textured plot with thoughts running through that are meant to affect the senses plus fight scenes that feel intense and daring.

At the recent International Film Festival of India, I met up with the legendary Wong Kar Wai. Here is my interview with him:

Bina Datwani: Lets dive into your epic masterpiece ‘The Grandmaster’; what kind of research did you have to go through to attain all the exhaustive background details?

Wong Kar Wai: I’ve always been a huge fan of martial arts but unfortunately, never had the opportunity to learn and practice the skills.  This meant having to start from scratch re learning about the different schools, forms and regions which involved being on the road for almost two years.  We travelled extensively, interviewing all the various masters of kung fu and dug through numerous archives.  It was a lot of fun.

BD: I heard that Tony Leung said he felt like he was dying at one point but you said that he had to keep practicing; was the physical training very vigorous?

WKW: I’ve worked with Tony in seven films so far and know that he’s a dedicated actor.  The choreographer was Yuen Woo Ping who is in his seventies and has worked on movies like The Matrix and Crouching Tiger Hidden Dragon.  Yes the training was very hard and intense; it went on for over a year plus Tony broke his arm twice.  But he pulled it off.

BD: You’re well known for opting for accuracy over aesthetics; since films are typically works of fiction, do you think getting the facts right is always worth the extra time, effort and expense?

WKW: As far as I’m concerned, unity is far more important than aesthetics.  For a filmmaker, a movie is about form and substance; form is related to aesthetics which in turn has to serve the content so the two have to go hand in hand.  I feel a film will only look beautiful if it is right (accurate).

BD:  There seems to be a common thread running through your films – reflecting on memories of the past.  Is there any personal reason for this?

WKW: I think that when people watch my films they usually find love stories because longing and loving are very active human experiences.  The objects of these passions and obsessions could be a man or a woman or it could be about life.  Actually it could be about almost anything but it so happens that in my movies, it becomes a romantic story.

BD:  Do you think that the current trend of kung fu films being made are too gimmicky?

WKW: I feel they have to be because today kung fu is also like a genre.  The reason I wanted to make The Grandmaster was as an expression of Chinese martial arts – it’s not just about kicks and punches.  What I mean is that it’s not a kung fu film; rather it’s a film about kung fu. 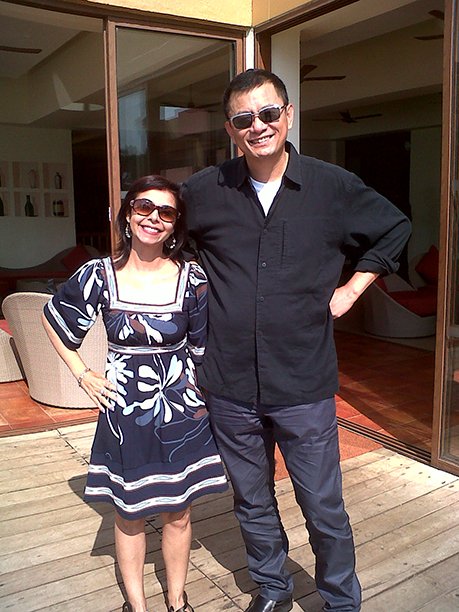 BD:  Has your style of filmmaking altered after winning the Best Director award at Cannes in 1997 for ‘Happy Ending’?

WKW: I don’t look at it that way because we don’t make films to win awards – it comes as a bonus.  Of course it was nice to win and there was a feeling of success that followed but, for most filmmakers, the afterthought is more about what you’re going to say in your next movie.

BD:    I’ve heard you like to play music during shooting; what’s the thinking behind this?

WKW: I feel that when a film is born with a certain type of music, it enhances the shooting process.  And by listening to that music, the actors then get a sense of what I’m looking for in a particular scene.

PS – As a former resident of Hong Kong, I was especially thrilled to score an interview with WKW – conversing with him in Cantonese was definitely a highlight!