Who said there’s an off-season in Goa? It can be argued that there’s no better time to be in Goa than the monsoons, thumb when the entire state turns green, store wild flowers sprout and the land comes alive with fresh water streams. And yet with Goa’s image as a sunny beach destination, the monsoons are… END_OF_DOCUMENT_TOKEN_TO_BE_REPLACED

Who said there’s an off-season in Goa?

It can be argued that there’s no better time to be in Goa than the monsoons, thumb when the entire state turns green, store wild flowers sprout and the land comes alive with fresh water streams. And yet with Goa’s image as a sunny beach destination, the monsoons are still something of an open secret. All that’s changing, though, with the Goa government and the tourism industry aggressively marketing the state as a cool monsoon destination – with waterfalls, river rafting and other thrills there for the taking. Yes, right there in the midst of the pouring rain.

The monsoon no longer deters tourists determined to visit Goa, going by the number of visitors thronging places like Calangute and Panjim even during the rains. Officials estimate that the number of monsoon visitors to Goa has been increasing by between 10 and 20 percent a year for the past eight years. According to the Tourism Ministry, during the period from June to September of 2012, Goa was visited by 3,76,992 domestic tourists and 28,461 foreign ones – a number that is expected to rise this year. 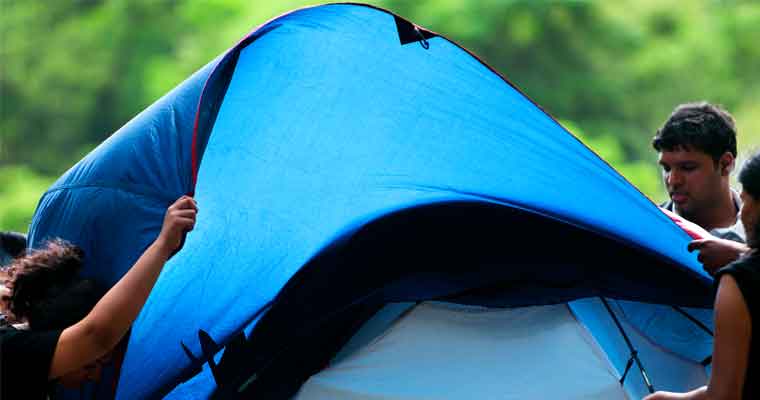 “We have been coming during the monsoon, and it gets better each season, it has a special vibe,” says an Irish tourist who identified herself as Susan. “There are lot of beaches you can visit and most of them are quiet and peaceful… If you are the adventurous type and want to take a chance you’ll love the greenery and fresh smell of monsoons in Goa.”

Tourism officials have been making a concerted effort to attract tourists even during what used to be known as the ‘off-season’. The fact is there is really no longer an off-season in Goa. It’s on all the time. ‘Go Goa – 365 days on holiday!’ was the slogan which started it all some eight years ago.

According to tourism industry insiders, an earlier initiative by the government to promote ‘hinterland’ tourism during the monsoon didn’t succeed, primarily because of a lack of facilities like luxury resorts in the hinterland. Places like Calangute are chock-a-block with resorts and umpteen dining options. A Swiss tourist, Jean-Pierre, talking to Streets in Valpoi where he had come for some river rafting, said he wanted to spend a couple of days there but couldn’t find a place to stay in the area. So he went back to Calangute after the rafting. “We come to Goa for nature,” JP, as he calls himself, told me. “This place is so beautiful, but I don’t think too many people know this part of Goa.” 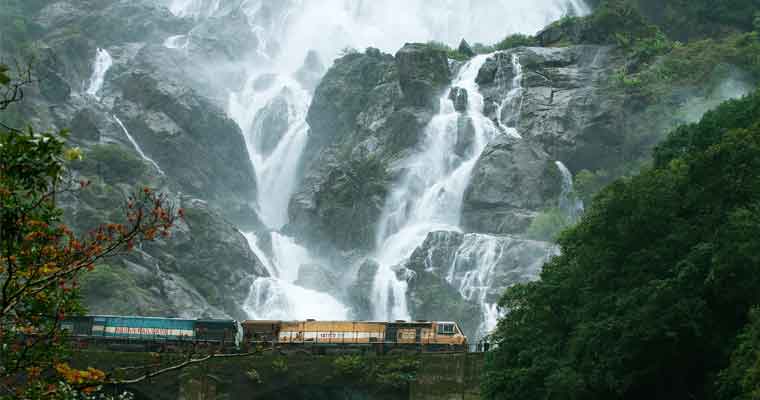 Now I decided to see for myself whether there’s any decent places to stay in the area, so I called Tourism Minister Dilip Parulekar to ask. To my surprise, he said that yes, the Tourism Department has a three-star property there. Wonderful, no? Actually, no. “It has remained non-operational for the last few years,” Parulekar explained, adding hopefully, however, that “we’re now developing it and beautifying it” and hope to lease it out “by around December.”

River rafting is one of the latest offerings by the Tourism Department to attract tourists during the monsoon. One of the many wonderful things about monsoon tourism is that you don’t have to actually be a tourist to enjoy it. Dr.Dialle D’Souza, from Calangute, also rafted down the rapids and he loved it.

“I’ve done rafting once before, but this is more beautiful because the area is completely untouched,” he said.

While the rafting trips started last year, this year the Tourism Department’s focus is on MICE tourism (yes, I agree this is a rather unfortunate title). A top tourism official, talking about MICE, said “Corporate houses could hold their conferences and activities in Goa at a time when hotel room rates are low and simultaneously give their employees a welcome break in Goa.” That is, a paid holiday. 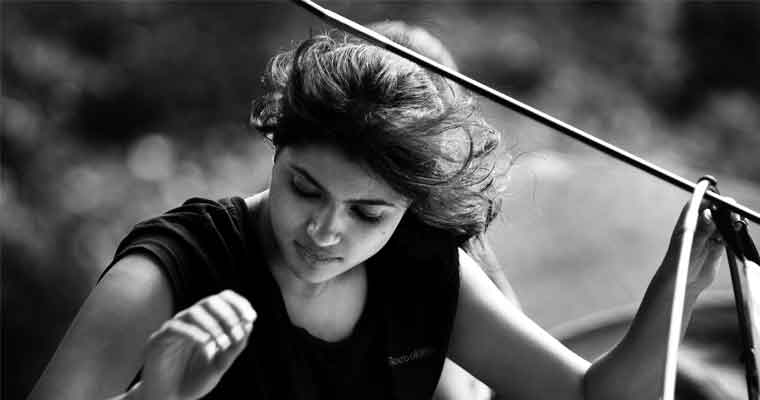 A tourist pitching a tent at Dudhsagar

The focus of this all-India campaign is the domestic tourist. The hope is that resorts which are full of foreign charter tourists during the high season can have some decent occupancy levels now. There are no foreign charter tourism flights during the monsoon, and consequently fewer foreign tourists. That’s not to say there aren’t any at all, however, as testified by the white faces seen strolling down Panjim’s avenues and the beach belt’s lanes at this time of year.

Richard, an Englishman, is a regular visitor to Goa, both in and out of monsoon season. He says he is struck by the humidity at this time of year.“The weather here is so humid that if you wear a plastic raincoat, you will end upmore wet by sweat than by rain,” he says.

What about foreign arrivals other than charters? And the possibility of attracting more Indians?The clincher is the reduced – ‘off-season’ – room rates. The Leela Goa, for example, reduces room rates by nearly 400 % during the monsoon. A standard room which costs Rs 45,000 during the December peak season is available for Rs 9,000 during the monsoon. It’s an attractive proposition for corporates who can then give their employees ‘paid holidays’.  People love it because they “get to go to Goa”.  Never mind that it pours. 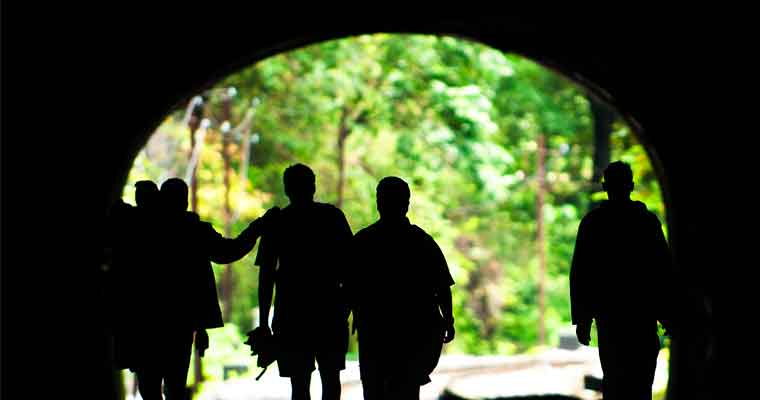 Walking through a tunnel near Dudhsagar

Of course, once here there is no dearth of events for them to enjoy, including the recent Sao Joao festival and its riotous rituals of jumping into water bodies on the feast day of St John the Baptist. Though essentially a Catholic festival, it’s now celebrated by dozens of resorts with music around swimming pools.

It’s true the promotions are attracting lots of Indians during the monsoons, but not everyone in the industry is thrilled about it. A general manager of a premier resort in Calangute, requesting anonymity, complained about the type of tourist he gets. “There were 15 adults and they had brought along 15 children below seven years who get free stay. They would come for the buffet and when offered something by the stewards, they would take the whole tray and wolf down everything.”

The folks this GM referred to didn’t do anything but hang around the hotel and the beach. But there are others who do visit places like the Dudhsagar waterfall and Selaulim Dam, both of which are at their awesome best during the monsoon. Although it’s dangerous to enter the water on the beaches, many still do. And of course there are many heritage sites, especially churches, to visit. And just driving around the Goan countryside which turns completely green during the monsoon is an invigorating experience.

But despite the best efforts of the Tourism Department and others, the fact remains that tourism during the monsoon is concentrated in a few places like Panjim, Calangute and Old Goa. Most of the popular beach areas like Arambol, Morjim, and even Anjuna in the north, and most of the Salcete beaches in the south, turn into virtual ghost towns during the rainy season. Even in the north, many of the resorts and most of the shops in Candolim – which largely cater to the charter tourist crowd – shut down during the monsoon, laying off staff while focusing on maintenance and upgrading work. Even the taxi drivers take a break, along with others like the water sports operators, the shack operators and many of the restaurant owners.

SudeshShirodkar, a small guest-house owner in Calangute says, “It’s hectic during the season with guests coming at any time of the day and night, asking for this and that. So for three months we shut down the guest-house, do all the maintenance work like painting and repairs.”

An English tourist named Trevor says he doesn’t recommend coming to Goa during the monsoons.

“Even the sea rages with a vengeance of its own,” he says. “You probably would want to give this region a miss during this time unless you’re the type who would like to sit at a lonely table in a shack on a beach sipping your beer and watching the sea powerfully rip at the shoreline.”

Come to think of it, I think yes, I might just be that type. Looking at current trends, it appears so are a lot of others.