The great black American author and poet Maya Angelou died on May 28 at age 86. She inspired millions around the world through her poems, vcialis 40mg autobiographies and essays, and her work in the theatre, cinema and TV spanning decades. Her landmark 1969 book “I Know Why the Caged Bird Sings” – a deeply moving account of her life in the segregated American South – won her acclaim throughout the world.

Angelou’s incredible life and career included a stint as a calypso singer, a dancer, a single mother, a magazine editor in Cairo, an administrative assistant in Ghana, a college professor and a Tony-nominated stage actress. She was the first black street car conductor in the city of San Francisco. She also wrote cookbooks, and in the 1950s danced in the George Gershwin opera Porgy and Bess. She counted the Rev. Dr. Martin Luther King Jr. and Nelson Mandela among her friends. She liked to drink sherry when she wrote her poems.

While she had been a well-known presence on university campuses and other forums for decades, perhaps her widest exposure took place on January 20, 1993, when she delivered the inaugural poem “On the Pulse of Morning” at the swearing-in of President Bill Clinton who, like her, had grown up in Arkansas.

As a tribute to Ms. Angelou, and to this season of hope and renewal in India and Goa, we reproduce her stirring words here.

On the Pulse of Morning
By Maya Angelou

A Rock, A River, A Tree
Hosts to species long since departed,
Marked the mastodon.

The dinosaur, who left dry tokens
Of their sojourn here
On our planet floor,
Any broad alarm of their hastening doom
Is lost in the gloom of dust and ages.

But today, the Rock cries out to us, clearly, forcefully,
Come, you may stand upon my
Back and face your distant destiny,
But seek no haven in my shadow.

I will give you no more hiding place down here.

You, created only a little lower than
The angels, have crouched too long in
The bruising darkness,
Have lain too long
Face down in ignorance.

The Rock cries out today, you may stand on me,
But do not hide your face.

Across the wall of the world,
A River sings a beautiful song,
Come rest here by my side.

Each of you a bordered country,
Delicate and strangely made proud,
Yet thrusting perpetually under siege.

Your armed struggles for profit
Have left collars of waste upon
My shore, currents of debris upon my breast.

Yet, today I call you to my riverside,
If you will study war no more. Come,

Clad in peace and I will sing the songs
The Creator gave to me when I and the
Tree and the stone were one.

Before cynicism was a bloody sear across your
Brow and when you yet knew you still
Knew nothing.

The River sings and sings on.

There is a true yearning to respond to
The singing River and the wise Rock.

So say the Asian, the Hispanic, the Jew
The African and Native American, the Sioux,
The Catholic, the Muslim, the French, the Greek
The Irish, the Rabbi, the Priest, the Sheikh,
The Gay, the Straight, the Preacher,
The privileged, the homeless, the Teacher.
They hear. They all hear
The speaking of the Tree.

Today, the first and last of every Tree
Speaks to humankind. Come to me, here beside the River.

Plant yourself beside me, here beside the River.

Each of you, descendant of some passed
On traveller, has been paid for.

You, who gave me my first name, you
Pawnee, Apache and Seneca, you
Cherokee Nation, who rested with me, then
Forced on bloody feet, left me to the employment of
Other seekers–desperate for gain,
Starving for gold.

You, the Turk, the Swede, the German, the Scot …
You the Ashanti, the Yoruba, the Kru, bought
Sold, stolen, arriving on a nightmare
Praying for a dream.

Here, root yourselves beside me.

I am the Tree planted by the River,
Which will not be moved.

I, the Rock, I the River, I the Tree
I am yours–your Passages have been paid.

Lift up your faces, you have a piercing need
For this bright morning dawning for you.

History, despite its wrenching pain,
Cannot be unlived, and if faced
With courage, need not be lived again.

Lift up your eyes upon
The day breaking for you.

Give birth again
To the dream.

Women, children, men,
Take it into the palms of your hands.

Mold it into the shape of your most
Private need. Sculpt it into
The image of your most public self.
Lift up your hearts
Each new hour holds new chances
For new beginnings.

Do not be wedded forever
To fear, yoked eternally
To brutishness.

The horizon leans forward,
Offering you space to place new steps of change.
Here, on the pulse of this fine day
You may have the courage
To look up and out upon me, the
Rock, the River, the Tree, your country.

No less to Midas than the mendicant.

No less to you now than the mastodon then.

Here on the pulse of this new day
You may have the grace to look up and out
And into your sister’s eyes, into
Your brother’s face, your country
And say simply
Very simply
With hope
Good morning. 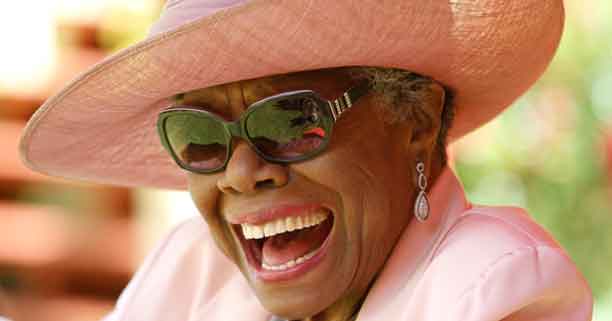