On the 21st of September

The municipality doors were shattered

When the Mass was in progress

There were rivers of blood 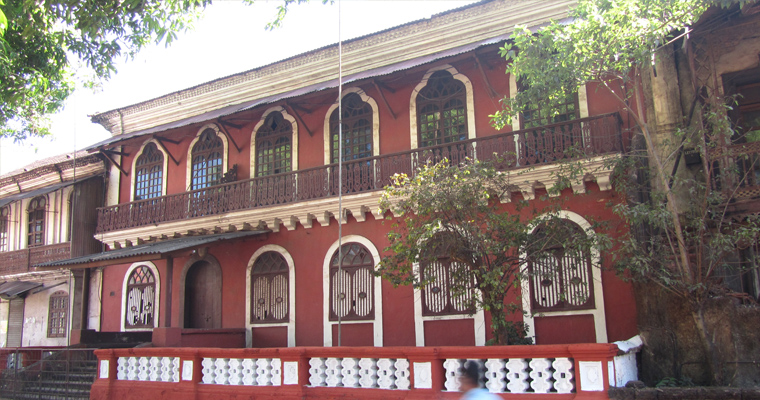 House of Alvares at the Church  Square

It was the day of municipal elections. Voting turned into protests amidst allegations of rigging. The Portuguese administrator ordered his forces to fire into the crowd of over 4, 000 people gathered around the Holy Spirit Church in Margao. Seventeen people died on the spot, stomach including a woman leaving the church and a young boy clinging to the garden wall of his house. The 20 minutes of shooting eventually left 23 dead in the infamous incident on Sept. 21, 1890.

This is the story of the Massacre in Margao, one of the most shocking events of Goan colonial history. 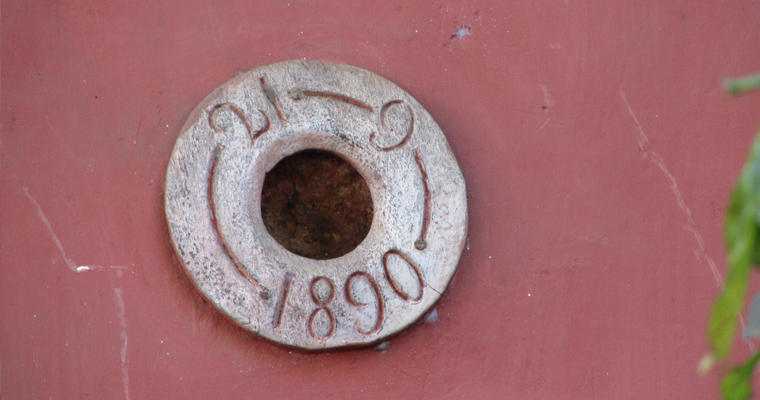 Bullet hole surrounded by plaque at the House of Alvares

Members of the Partido Indiano, a pro-people party led by Jose Ignacio de Loyola, protested against rigging of municipal council elections that favoured the government backed Partido Ultramarino, headed by Bernardo da Costa.  Among the many tragedies of this story is the fact that the fierce protests had largely calmed by the time the administrator ordered the shootings. He did so because a photographer began taking pictures that he feared would expose irregularities.

In the aftermath of the killings, Vasco Guedes, the then Governor of Goa, clamped down on the local nationalists and many faced trial for sedition. Many printing presses were closed down and the leaders fled to Karwar and other parts of India. But the event compelled the Portuguese administration to accept the political aspirations of the Goan people. Loyola and his supporters returned to Goa in 1891 and the Partido Indiano returned to power in the Municipal government of Salcete taluka.

Dr. Francisco Colaço, an eminent cardiologist, has been running a cardiac hospital on the ground floor of his heritage house for many decades now. The house is just to the left of the Holy Spirit Church, part of the phalanx of extravagant mansions lining the Church Square (Largo de Igreja). 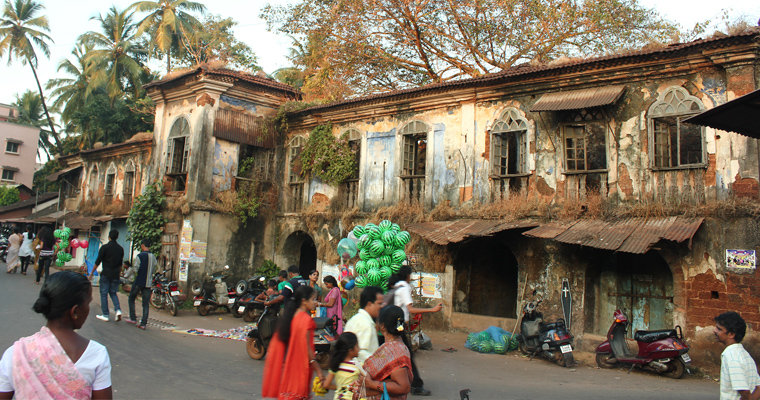 At the heart of the tragedy – the old Margao Muncipal building

Speaking at the launch of the book, Dr. Colaço expressed pride in Goan courage. “On that day in 1890 Goans showed that they were fearless.” But he also added some words of caution ? “In recent elections we were happy we got rid of the corrupt Congress government, but the new government does not like criticism and is quite capable of imposing draconian measures.”

The house of Dr. Salvador Alvares, to which many of the protestors fled on that fateful day, still bears the bullet holes caused by the fusillade of the Portuguese soldiery. The house owners have framed the marks with circular brass plaques to immortalize the event.

This event has been veiled in secrecy in historical accounts, says Maria Aurora Couto in her book A Daughter’s Story, which also chronicles this incident. Massacre in Margao is the first book to provide a detailed account of this tragedy. The irony of 1890 is that the conflict at the local municipal level was between Goans belonging to opposing parties.

“This conflict was between two parties which were both formed by Goans. The Partido Ultramarino consisted of Goans who supported the ruling government, but I don’t think they would have condoned the brutal firing that took place,” says Leonard. 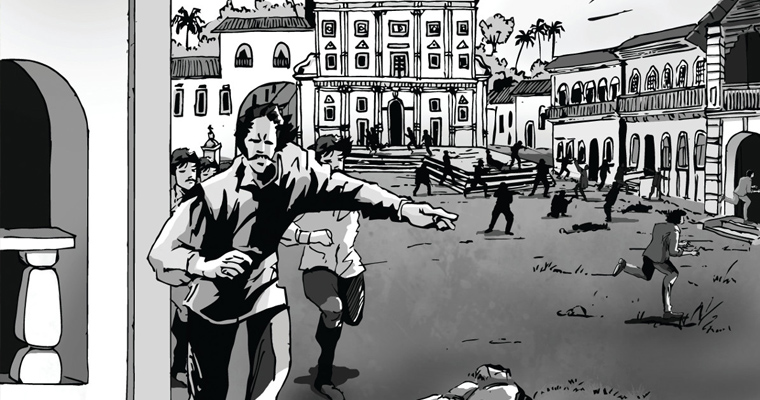 An illustration from the graphic book

The graphic format of this little book makes it easy to read for the young and old alike. Graphic books are a powerful genre worldwide today, combining literature and art. Classic graphic novels like Alan Moore’s Watchmen and Frank Miller’s ‘spartacular’ 300 have their own cult following. In India, Sarnath Banerjee’s Corridor is considered the first graphic novel. Amruta Patil recently followed up her coming-of-age graphic novel Kari with Adi Parva based on the Mahabharat.

While Leonard handles the research work on their publications, his wife Queenie Fernandes manages the publishing process. Their next book in the ‘Lest We Forget’ series is going to be chronicling the battles for Goa in 1510. “There were three major battles fought in that year, involving Afonso de Albuquerque and the Adil Shah,” notes Leonard.

The temptation to depict the gore of bloody events always exists, but Massacre at Margao has been executed with remarkable discretion, keeping in mind the young and impressionable audience that a graphic book attracts.

The Cinnamon Teal team has been exploring a niche in Goa books, hunting down rare manuscripts and historical data on Goa and bringing this back to the Goan people. Arte de Lingoa Canarim (1640) was the first Konkani and first Indian Grammar book ever published, by Thomas Stephens, a Jesuit working with the first printing press in Goa and India. While visiting the London Book Fair in 2010, Leonard located the ancient grammar in the Library of the School of Oriental and African Studies. He digitized and printed 50 copies of this rare book, thus making it available to scholars and the public.

Margao city has seen a recent upsurge in heritage awareness activities. The Goa Heritage Fest was held in Margao in December 2012, wherein, among other activities, several heritage houses were illuminated and provided with information boards with architectural and historical data. The Margao Communidade building and Old Market shops were cleaned up and given a fresh coat of paint. Lectures on history, architecture and traditional occupations were given and a heritage walk was organised through the Rua Abade Faria and Largo de Igreja. This month Goenkaranchem Daiz, a Margao-based heritage trust, hosted a lecture on the history of Margao, where the attendees expressed a strong desire to document, restore and protect the heritage structures of Margao.

The old Municipal building that was at the heart of the 21 September tragedy now stands in ruins. The roof of this once grand building caved in long ago and the walls now teeter on the edge of collapse. Some of the palatial heritage houses around the Holy Spirit Church are also in bad shape, while many have been meticulously preserved by their owners.

The fact that the release of this innovative graphic book took place in the House of Salvador Alvares that still holds the bullet holes of that fateful day is poignant. Those framed bullet holes serve as a lasting reminder of intimidating and crooked governance, symbols that will always linger in the collective memory of Moddgonvkars and all Goans.