Who Said Old Has To Mean Decrepit?

Who Said Old Has To Mean Decrepit?

Your beloved Indo-Portuguese house has been standing proudly for at least a century. Your ancestors or the previous owners lavished love and affection and loads of man-hours and money into maintaining it. Sure, link these ancestral houses are huge and have you grumbling about the annual repair costs. Streets spoke to some classic house owners to see how they do it.

Many ancestral houses have been cleverly adapted and can now better fund their own repair. The Palacio do Deao at Quepem entertains visitors for dining and cultural activities. Daegal Godinho turned his Majorda mansion into Carpe Diem, prescription a thriving hub of art events. Visitors can enter houses like the Menezes Braganza-Pereira house at Chandor to see the lifestyle of Portuguese Goa of decades past. Its fine architecture, extensive halls, windows made of shell and cravings and antiquities from around the world, has made it a must-see on tourists’ list.

These grand houses rarely receive any help from the government. This has made their maintenance more challenging for the owners who end up burning large sums from their own pockets. Let’s look at three of these magnificent mansions:

“With our sacrifices and hard work we maintain the house. We don’t receive financial help from the government,” states Maria de Fatima Figueiredo de Albuquerque, owner of the 408-year-old  Figueiredo house at Loutolim.

Nowadays many people sell their old houses because of the hassle of their upkeep, but that’s not the case in the Figueiredo family. “My grandfather’s intention was to preserve Goa’s heritage, and the traditions practiced during the Portuguese reign, for the Goan youth and for the world,” states Maria Figueiredo.

She adds that people hardly know about this house. It is only when a passerby drops in or some hotel managers recommend a tour that they get visitors. As it is a huge house, the family has converted one side of it into a guest inn, which generates a small amount of revenue. The house also caters special meals to a few important guests.

Rather than procrastinating on the repair work, the owners prefer to do it regularly and thus reduce the costs.

Maria’s mother Maria de Lourdes scoffed at the Government’s attitude. “I invited some officials for dinner years back, hoping that they would promote and support the house, but they looked as though they were expecting some bribe. The rascals only want money!” 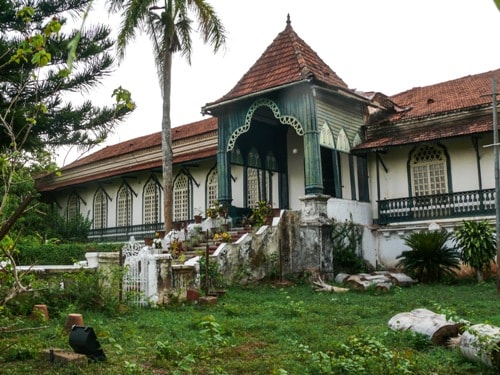 Just across the road from the Ancestral Goa museum at Loutolim stands the 250-year-old house of Maendra Jocelino Araujo Alvares, which is also massive and filled with ornamental artefacts. “Maintaining an old house requires a huge amount of ‘pesos’,” says Alvares. “Though we are three brothers we have not divided the property. The house is centuries old, made of mud walls and has a distinguished carpentry style. It’s very difficult to get labour for the upkeep of the furnishing.” He hires specialized and highly skilled labour to maintain the essence of this graceful house. The house and its landscaped grounds are also used for shooting films. 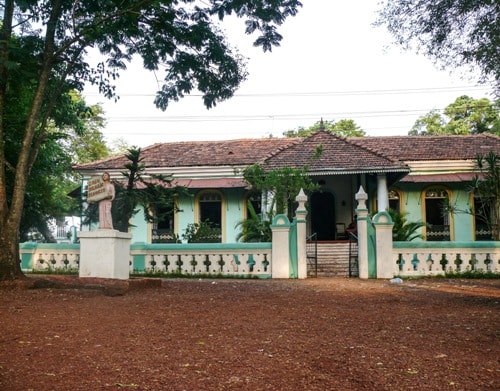 Chandrapur, now known as Chandor was once the capital of ancient Goa. It has seen the influence of the mighty Kadambas as well as the Portuguese. The extensive and magnificent ‘Casa de Menezes Braganza’ has an elaborate ballroom hall and is decorated with beautiful artefacts. Built in the 16th century, it is divided into two wings, the west wing being of the Menezes Braganza family and the other of Pereira Braganza.

The west wing of the house is well-maintained compared to the east wing. “We have to employ a lot of skilled people for various works,” says a family member. “The monsoons are approaching, so I have hired workers to clean the tiles and repair the roof. Large amounts of rare ‘Taylor Tiles’ which are curved in shape are required for the roof. Good care must be taken of the wooden floor. To buy the matching wood is very costly. The labour is very expensive and the daily wages are quite high. I am never sure how much I will have to pay, as the costs vary every now and then.” The house owners charge a fee of 200 rupees from visitors to help recoup the costs of the maintenance.

Instead of neglecting or selling such Indo-Portuguese houses, the owners can adapt them into cafes, boutiques, museums and various other uses. The government must provide some financial assistance to these owners. After all it’s our Goan heritage. You can build a million new concrete houses, but you can’t get back a collapsed Indo-Portuguese house.