Traditional healing (or cursing) practices in Goa Believe it or not, a big-time builder-financier from Panjim who normally bulldozes his way through all rules and regulations and authorities, was stumped recently when he was about to buy a prime property by – of all things – a spirit. What happened was that he went to… END_OF_DOCUMENT_TOKEN_TO_BE_REPLACED

Believe it or not, a big-time builder-financier from Panjim who normally bulldozes his way through all rules and regulations and authorities, was stumped recently when he was about to buy a prime property by – of all things – a spirit. 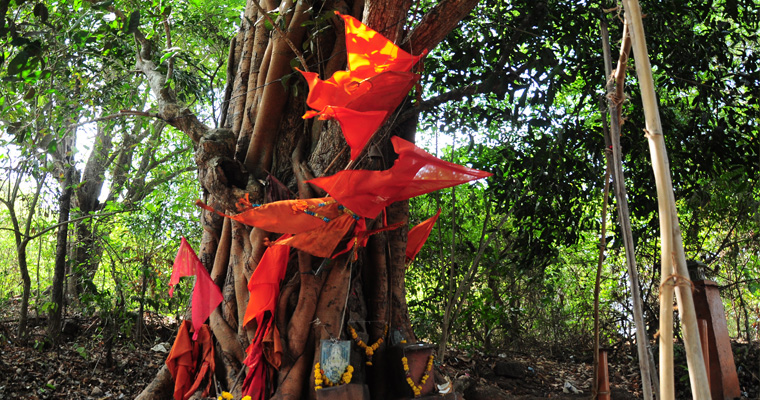 Turning to ‘gaddis’ for everything from advice on how to bring up children to casting evil spells on enemies is apparently quite an accepted practise amongst certain sections of Goan society. But what or who exactly is a ‘gaddi’? There’s no clear definition, but a ‘gaddi’ is a mix between a priest, a soothsayer, a black magician or sorcerer and a medium for communicating with spirits. There are many types of ‘gaddis’ and going to such persons, who can be either a man or woman, is known as ‘devosponn’ (rituals for the gods), or rather, what these persons do is known as ‘devosponn’. We met up with some such practitioners, whose names have been changed here.

Mahesh from Merces is one of the more well-known ‘gaddis’ and is the latest practitioner of ‘devosponn’ which has been in his family for generations. Their family gurudev is ‘Datta’, and according to people who know them or have used their services, they can do both, good and evil. We managed to chat with him for a brief while through a common friend. Though clearly reluctant to talk about their practices, he says people come to them for guidance and help and they don’t charge anything for their services, but usually people give donations out of gratitude.

They only conduct rituals on certain days of the week and he has to strictly observe certain measures like fasting and eating only certain foods on ritual days. He says that by reciting certain prayers he enters into communication with the god (or oracle) and then the god speaks and exercises his powers of healing or killing through him. He uses ash from wood burnt in the sacred fire to divine a person’s query and also to receive the answer or instructions on what the person should do. In case one’s enemy is to be harmed then the ash is given to the person who then has to throw it at the person if possible or put it in his path or in his house so that he suffers. 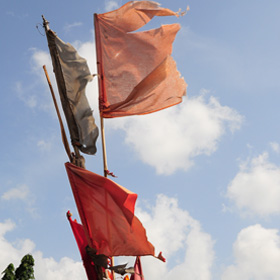 Sitabai from Candolim is also a well-known ‘gaddi’, but she claims that what she does is not ‘devosponn’. In fact when we meet her, the first thing she tells us is that she never entertains people “who’ve been going around to different places doing ‘devosponn’.” She says she only helps people because she has the gift and the spirit of the goddess manifests through her. A Sateri worshipper, she had actually gone into reclusion because of the Shirgao zatra this Thursday, but we still managed to meet her.

“People come to me when they have troubles,” she says, “and the devi shows the cause of their trouble, who is to be blamed and what safety measures and precautions they should take.” According to her acquaintances, she only does this for her community or clan members and not for others, and she never charges any money. She sits in her home temple on Tuesdays and Thursday with an old-style low wooden table in front of her on which are kept small heaps of un-husked grains of rice. Invoking mantras and going into a trance, she then lifts the grains and throws them on the table like dice; the way the grains fall tell the tale. She may do it a few times to get a clear picture. The visitor who has to first profess his or her devotion to Sitabai is then given some of the grains to be kept as a charm or to be thrown at the enemy and such like. Her family members say their main business is a restaurant in the coastal tourist belt. Siddesh’s family is in the transport business.

There are many others like these in Goa, with some villages like Shiroda, Pirna, Marcela, well-known for these practitioners. While they perform the simpler rituals and operations in their house temples, there are also said to be certain ‘power’ spots where the more special rituals are performed. One such spot is the ‘ghumti’ on the old Patto bridge which is said to be the haunt of a very powerful spirit which, if appeased properly, grants all your wishes.

With the shroud of secrecy around these activities and the respectable cloak worn by some of these practitioners, it’s difficult to figure out whether these traditions are a part of mainstream religions or whether they really belong to the occult and Tantric traditions. There are even Catholic practitioners in Goa who practice what can only be termed as unconventional religious practices. There’s one man in Margao who gets possessed by the ‘Saibinn’ or Mother Mary and starts talking in a female voice, answering people’s queries on certain days of the week. The podgy old man even dresses in a white bridal costume when he goes into a trance, though people who have been there say it can be quite bizarre to see his moustache behind the veil! But then with such things one has to suspend one’s rational faculties.

There are some who specialize in exorcism, like in Nuvem, although the mainstream Catholic church frowns on such activities. There’s one Muslim ‘tantric’ in the suburbs of Panjim who specializes in serious black magic involving animal sacrifices. One ritual involves beheading a chicken and then nailing its still beating heart on the trunk of a tree, all the time mouthing phrases like “This is the throat of so and so person”, “this is the heart of so and so”, in the hope that the enemy will die, a bit like in voodoo magic.

Whether all this really works or not is a matter of debate, personal experience and conjecture. In fact, even with mainstream religion, people routinely pray to their favourite gods and saints for favours or respite from troubles and it’s not uncommon to hear common folk remark as they come out of Sunday church that they prayed for their enemy’s death!

Believers in such mumbo-jumbo might have got a jolt of reality with the Pawan Bansal incident last week. With his days as a minister in the Union cabinet clearly over, Pawan Bansal, the Railway Minister, apparently fed milk to a goat in the morning after he was advised that doing so would save his chair. But he was still sacked later in the day. Aishwarya Rai was luckier. Because of certain planetary combinations, they said marriage would be a disaster for her – but there was a remedy. If she was first married off to a tree, then her marriage with a mortal man would work. So she was married off to a tree in Varanasi as per certain rituals and only then did she marry Abhishek Bachchan! The fate of the tree is not known.