Women, Humanity and The Beautiful Art of Oswin Rodrigues

The interplay of the emotions, vulnerability, courage and sensuality of a woman captures Oswin Rodrigues’ imagination. This language was well translated on canvas at his solo exhibition titled ‘Her Transcendent Beauty’, which concluded recently at the Kala Academy in Panjim.

“I find expressions on the face of a woman are the key to her inner beauty. My process of thought starts with a woman who is a sister, a lover, a wife, a mother. I want to portray her inner beauty, keeping aside materialism to which it is the biological nature of man to be attracted to. It’s very important for me to have that connection with women in their day-to-day lives, to enable me to depict the powerful minds of women I have met and established a connectivity with,” says 25-year-old Oswin about his debut exhibition.

Always fond of drawing, this self taught artist delighted his classmates with caricatures of teachers, friends and kids who were unfriendly towards him. He grew up in Margao, schooled at Don Bosco’s in Panjim and earned a degree in Business Administration. Then he veered off to study a multimedia course in Visual Effects at ICAT, Bangalore, after which he worked as Paint Artist and production programmer for high-end feature films and TV channels at Bangalore and Chennai. 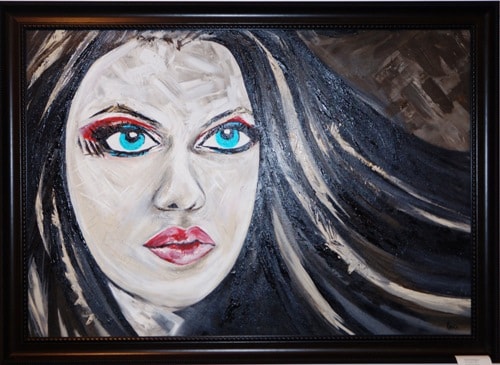 Multimedia is a demanding career with merciless deadlines, needing unquestionable dedication. This honed Oswin’s artistic sensibilities, and two years ago he decided to channel his mind’s eye on canvas. Oswin’s semi-abstract portraiture incorporates the styles of Romanticism and Realism, which were art movements that affected art style over the world during the latter half of the 19th century. The characteristics of this style are bright exotic colouring and vigorous strokes and movements.

Oswin’s ‘guru’ is Voka, an enormously popular Austrian artist who coined the term Spontaneous Realism, to describe the dynamic creative process of his representational and impressionistic imagery. Whether a street scene in Miami, Vienna or New York, or an ironic portrait of Marilyn Monroe, Jimmy Hendrix or Charlie Chaplin, the simple expressions, vigour and enthusiasm of spontaneous realism convey a powerful emotion.

Influences of Voka’s seemingly hidden but omnipresent everyday events of daily life have percolated into Oswin’s body of work. He affirms, “My aim is to foster human connectivity through the elusive language they speak, which captures my imagination.” The paintings in acrylic on canvas have a vibrant energy of colours. The artist blends multi-colours, compositions are highlighted in gold, black, blue and red. There is provocative expression in the painting titled ‘Yearning’, and there is the vigour and energy of yellow and orange in ‘Patient Love’. Expressions of angst come forth in the bold strokes and in the dexterous texturing with edgy details. He amalgamates primary colours and plays around with shades of brown, blue, green and white. 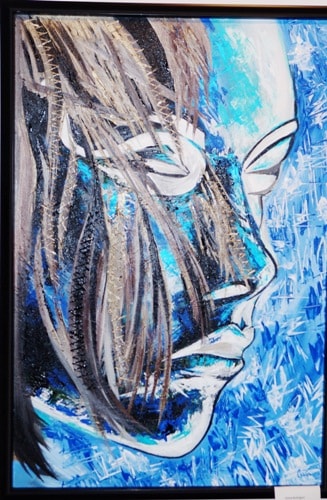 For an artist to sell around nine works from the thirty-three on display, priced between 20,000 to 35,000 rupees, at his first show, is quite impressive.

“I really have no words to describe this euphoric feeling at actually selling my work. And I get a kick out of seeing someone look at my painting and recognize themselves or someone they know. It’s a huge reward.”

A diehard fan of Hip Hop, R&B and Rap, Oswin listens to one particular track over and over again as a painting takes shape. That could be like a couple of hours or more! He finds every repetition brings out a new visual. Due to his training in video art, the visuals connect with particular lyrics and narrate a story in varying facial structures.

“The colours I choose make me come alive. It’s a personal expression, so I believe nothing is wrong or right and I have no boundaries. I innovate and flow with the moment. And it’s an incredible feeling to take a step back from the canvas and to meet or see your creation for the first time,” says this young artist, as he commences his journey into the wild, wild art world. 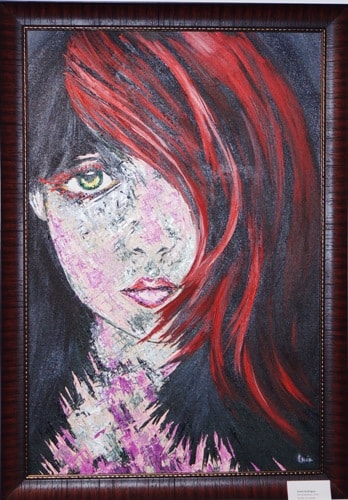 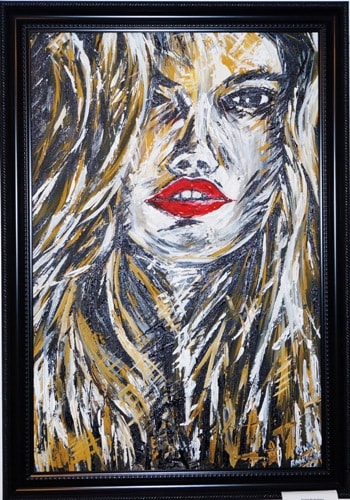